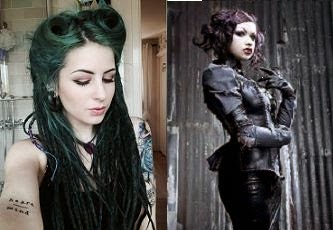 Threnody Noir is a pint sized Gothic Burlesque dancer from Glasgow. Performing routines for bars and clubs on the alternative circuit, she is just starting to get her name known, and has even been to London once or twice to perform at the Torture Garden. Her style is a mash-up of Suicide Girls meets kinky Bram Stoker.

When not performing or creating costumes and routines she balances the books with income from a part-time job pulling pints and dishing out Jack Daniels to drunks at the Hard Rock Cafe. Outside of her stage-life she is Becca Adams, 22 years old and living in a damp and dingy shared flat with her two flat-mates. Life is tedious but she gets her kicks when she can.

Becca Adams grew up in a tenement just off Duke Street with her brother John and her mum. It was nothing exciting and her mum did the best she could as a single-parent, working two jobs to provide for her children. Because of this Becca was able to go to ballet classes from when she was little and showed herself to be a rather exceptional dancer. Her mum found it a terrible and disappointing shock the day Becca decided, aged 13, that she didn’t want to dance anymore and instead joined her brother at the local Aikido dojo. Her mum secretly hoped it was just a phase with her rebellious young daughter.

By 16, Becca and her brother John were on their own as their mum died of cancer, leaving John to bring up his sister. This time left its mark on Becca and her confidence shrank as she found it increasingly difficult to fit in at school. It felt like she was living in a different world from her peers, though try as she might she couldn’t make any real friends. By the time she left school for college she was a very average student who secretly coped with her anxieties by controlling what she ate and purging when her control slipped.

Once at college she discovered a whole new world. Studying an HND in Applied Art was a revelation to her. Trying her hand at glass, ceramics, jewellery and textiles she uncovered a passion for making performance costumes. Suddenly she could be whoever she wanted to be. Suddenly she was cool, people found her funny and attractive, and it was here she discovered Glasgow’s rock scene and alternative culture.

On the eve of the referendum Threnody Noir is slumming it big style on the National Express. Her costumes are packed in a vintage travel case in the hold, while she is with the hot and sweaty human cargo that was scraped up and crammed in at London Victoria. She’s wishing she’d been pushier in the queue to have gotten a window seat and now she’s rubbing shoulders with Mr Old-Firm who’s oozing Tenants from his gills. Closing her eyes and hoping for sleep between here and Buchanan St. Bus Station, her hopes for her country flicker through her mind - tomorrow it’s the ballot box, but for tonight it’s the coach. Burlesque isn’t all nipple tassels and glamour.

Brian, could you kindly provide me with a reply and/or feedback of any kind???

I don't think I've received any messages from you Andre. I'll send another email in a few minutes. Let me know if you get it.

without actual play inspiration the blog has slowed to almost nothing

DevDigs is an outclass SEO Company in Pakistan which focuses on the delivery of supreme-quality and first-class All Best SEO Packages Pakistan. SEO Agency Pakistan is a talented group of SEO experts that are capable to collaborate with both small-scale as well as large scale industries. The well-trained and up to date SEO experts at DevDigs deliver All SEO Services Pakistan beyond expectations so as to promote healthy relationships with numerous types of businesses.
DevDigs is a leading Digital Marketing Agency Pakistan which aims to deliver top-quality SEO Pakistan. Their SEO procedure takes in keyword research. In order to perform a further relevant investigation, DevDigs implements a number of different effective and useful tools. SEO Agency Pakistan makes the selection of keywords by keeping in view numerous considerable aspects e.g., target audience, type of their business, geographic location etc.

You should see how my colleague Wesley Virgin's biography begins with this SHOCKING AND CONTROVERSIAL video.

Wesley was in the military-and shortly after leaving-he discovered hidden, "SELF MIND CONTROL" tactics that the CIA and others used to get anything they want.

These are the exact same tactics lots of famous people (especially those who "come out of nothing") and elite business people used to become wealthy and successful.

You've heard that you use only 10% of your brain.

Really, that's because most of your BRAINPOWER is UNCONSCIOUS.

Perhaps this conversation has even occurred INSIDE your own mind... as it did in my good friend Wesley Virgin's mind 7 years ago, while driving an unlicensed, beat-up garbage bucket of a car with a suspended license and with $3.20 in his bank account.

"I'm so fed up with going through life paycheck to paycheck! When will I become successful?"

You've taken part in those thoughts, isn't it right?

Your very own success story is waiting to start. Go and take a leap of faith in YOURSELF.

CLICK HERE To Find Out How To Become A MILLIONAIRE

We are providing Airport Transfers to Washington DC, Maryland & Virginia.

Informative ideas. Keep it up!

Vertri Limo provides one of the best Limo Service DC, Limousine Service in the Washington DC,

Are You Looking forLimousine Service near me:

Airport Transfers service across all over the Washington DC.

Book an Online trip to the Washington DC Airport!