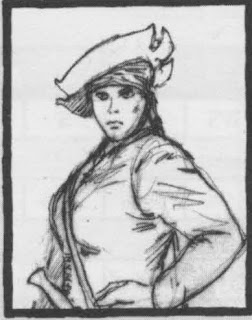 We actually managed to get a great deal more done in that first (well, technically second since I joined a week late) session of the WFRP campaign which I've recently been posting about. However, the morning after Geheimsnacht seems the natural place to stop for the first promised interlude. Needless to say, certain things will happen in Seigfried's career that he will not be too keen to trumpet for all to see on the pages of a broadsheet. Any such omissions from the "true and honest account", will be revealed in summary's such as this.

So, without further ado here follows the truth behind the eminent scribblings of the scribe Gospard of Nuln thus far.

33rd of Fore-Mystery (The Dwarven Night of Saga's)

A few hours before sunset, Siegfried “von” Schwimmer (as he likes to call himself) is driven off the road by a passing coach and into a ditch where a fellow traveller manages to simultaneously break Siegfried's fall and break Siegfried's favourite (and only) bow. Bertholdt, a rather weedy looking scribe who actually minces as he walks (don't you just love some of the random tables in WFRP character generation?) soon calms the irate young man with promises of a drink at a nearby coaching inn, the Prancing Cock.

The pair soon reach the inn to find it crowded with a variety of strange and unusual looking characters, including a small party of road wardens, a party of rough looking vagabonds (read: other adventurers - these guys will become important later) a noble's entourage (recently disembarked from a certain coach) and a single table occupied by an elf, a man and two dwarfs.

Bertholdt does make a joke and yes, Siegfried does punch him (albiet gently) for his troubles.

Strangely, though such an odd assembly would normally be given a wide berth and sullen looks by all present (being superstitious peasants and surly nobles) they are sat in pride-of-place at the largest table closest to the fire. It seems not even the noblewomen and their escorts have been able to shift them. But given how deep into their cups the two dwarfs are, and how often the locals seem to toast the strange party, perhaps that is not altogether unsurprising.

As the two travelers enter the taproom, the dwarfs appear to be taking turns to sing alternate verses about ancient dwarf heroes, while the other takes the opportunity for a long swig of ale. The human at the table, seemingly another road-warden by the device of Stirland he wears on an armband, taps his foot in time while the elf woman – who appears slight and rather, well, boyish, even for an elf- peers prissily over her spectacles at a large leather bound book.

As the dwarfs seem to be having a rare old time and, given there is not another seat to found anywhere in the taproom, the two young men head over to join this strange group of travelers.

The Road-warden, Dieter (whose players only made the first few sessions due to the publication of his first book and subsequent book tours) quickly brings the two travelers up to speed on the groups recent exploits. He also introduces Siegfried and Bertholdt (soon christened Siggy and Berty by the dwarfs, who don't seem entirely oblivious to the fact that Siggy is, in fact, a girls name) to the rest of his unusual company.

The discussion quickly turns to future travel plans. Happily, all five are travelling south for various reasons and they decide that river travel is a far better option given the unpleasant weather. Alas, the regular boat from the south (which turns round and heads back the way it came at the inn) is already running late. The cash strapped company decide they could save a few pennies off the fare if they happened to rescue the boat from whatever was the cause of the delay and agree to head south on the morrow. Though by this time Mordrin is a little too drunk to actually follow the conversation, let alone agree to anything, so Grundi accepts the plan on his fellow dwarf's behalf.

Before going to bed, Siegfried spends some time getting to know a few of the Vagabonds (adventurers) and Road Wardens, trying to learn a little more about the lay of the land, despite Dieters assurances that he knows the road well. He finds himself forming a very quick bond with another street-wise young traveler in the vagabond party, a somewhat slight and soft-featured fellow named Baur. The stranger is a rather pretty youth, and the handsome young Siegfried suddenly calls the conversation short when he begins to realize that, not only is the youth flirting with him, but he himself seems to be (rather unconsciously) flirting back. Siegfried gets very little sleep that night, being somewhat horrified at himself. Needless to say this part of the tale never makes it into Gospard's papers.

Geheimsnacht:
Travelling south through the forest and along the river Stir they next morning, they pass an old ruined, tollbooth which, fearing ghosts, they hurry past. They soon encounter a bedraggled group of monk returning to their priory following the recent march of Sylvania's undead armies through the Province. Many bear wounds which they ascribe to having fought off a group of bandits. Much to the fury of the characters however, they soon find that the so-called bandits were a column of women and children -the real refugee column. Siegfried and Mordrin are all set for tearing off after the real bandits immediately, but the others realise there will be plenty of time to catch up with the rogues. After all, their wagons wont be moving quickly in the muddy roads and heavy downpour. So they set to burying the dead while Siegfried searches around for a new bow and a few arrows to fill his empty quiver.

Bertholdt comes across an elderly frau clutching a piece of blue ribbon and a sealed parchment, already somewhat damp due to the rain. Grundi (the only character with the heal skill, Sigmar save us) does his best to heal the women but only serves to make her condition worse.

(Grundi only has an eighteen percent chance of passing a heal test. Ulric save us. His medical bumbling quickly becomes a running joke throughout the campaign as he consistently manages to reopen healing wounds with his ham-fingers and stuff his dirty fingernails where they shouldn't go).

In true heroic fashion, with her dying breath (or rather breaths. She actually rambles on for quite a bit given the fact Grundi has just killed her with a 00 on his heal check) the frau tells of her young charge, taken by the bandits, a noblemans bastard girl-child by the name of Bianca and begs the group to rescue her.

For reasons that will become apparent later (remember that “von” Siegfried is constantly bandying about) Siegfried in particular is touched by this girls plight, especially considering that, as the Graf's only surviving child, she has been recognised as his daughter and is proclaimed heir. An elevation to which the Fraul's piece of parchment attests (once Bertholdt finally reads it about three sessions later,  that is). "Siggy" is already striding back up the path in a frenzied, angry run before the Frau can gasp out that she recognised the “bandits” as mercenaries in the employ of the girl's uncle, who no doubt hopes to take the Graf's title for himself.

With no further discussion needed, the others quickly follow.

They reach the tollbooth just after nightfall and upon scouting, Siegfried finds it empty save for the corpses of the bandits and a few dead goblins. He kicks a few dead green-skins in despair and is all but inconsolable until Grundi finds a piece of blue ribbon impaled conveniantly on the bare twigs of a nearby tree.

Even Siegfried is not so rash as to pursue the young maiden into the depths of the forest on the Night of Mystery however, and so the party makes camp until morning. For the most part the night is uneventful, save for the creation of dwarf night-soil, yet the group is rudely awakened when a perplexingly happy Seigfired suddenly sits bolts upright in his blanket and shouts: "It was a GIRL!"

In fact,the whole Baur is really a man became a long running IC and OOC joke for years. John
was using the pre-gen PC's from the GM's Pack as NPC vagabonds and had completely failed to notice that "Herr" Baur had breasts. Despite this, he was playing Baur as being a little bit too interested in handsome young Siegfried and played "him" more like a seductive female- so maybe he had subconsciously picked up on the characters true gender after all. Because I made an off-hand comment about Baur "fancying" Siegfried John showed me the picture, whereupon I pointed out that "Herr" Baur had breasts. We all had a good laugh about John's oversight at the time, along with a lot of jokey references to the Blackadder episode when Lord Blackadder falls in love with a woman dressed as a man. We thought nothing of the incident after that - but John wasn't about to let an excellent opportunity such as that go to waste. Expect to find yourself reading a lot more about Baur later in these campaign reports. Although, by this point, only Seigfried has actually figured out IC that he is, in fact, a she. That's Baur's picture at the top of the article, by the way. See? Breasts!
Posted by Dangerous Brian at 02:19

Herr Baur a bird, Surly that's a padded gambeson and not the pokey out bits of a ladeee???

Tsssstch! Clearly DM John has been corrupting your perceptions if you truly believe those sketched little bits of perkiness are, in fact, the product of a poorly-fitted gambeson! Fah sir! Fah!