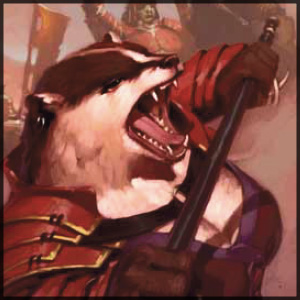 Conversion Notes: Removed alignment restrictions for certain sub-races. Changed the speak with animals ability so that it only works with animals of the same species the Hengeyokai can take the shape of. Allowed Hengeyokai to generate families of their own. Raised racial charisma limit from 17 to 18. While in Hybrid form, the character can no longer use armour, clothing, equipment or other items not specially designed for use in his hybrid form other than weapons. Increased the Drake's Dex modifier to -3 for game balance purposes- Drakes have too many advantages otherwise. Had trouble figuring out why Dog was listed twice on the animal tables (Dog and Raccoon Dog- the "Tanuki" native to Japan). Realized that the "Dog" entry actually referred to Tanuki and inferred that the "Tanuki" entry actually referred to Badgers (as the two terms are sometimes confused).

Hengeyokai is a catch-all term for several shape-changing races found throughout the Oriental D&D setting, often existing on the fringes of human society. They exhibit a natural curiosity that often drives young Hengeyokai to spend several years among human society, learning and experiencing all they can of human society. Their shape-changing ability is entirely a natural feature of their race. Hengeyokai are not lycanthropes in the sense that their shape-changing condition is caused by a disease or racial curse. Their activity is not dependent on lunar phases. They cannot heal wounds by shifting between forms. They cannot transmit their shape-changing ability in any way except to pass the condition on to their children. Nor are they especially vulnerable to silver or magical weapons - at least, no more so than any human.

Hengeyokai belong to any one of a number of sub-species and may often be confused for shape-changing spirits such as the evil Hu Hsien. Consequently, several species of Hengeyokai (fox and rat Hengeyokai in particular) are intensely distruted by humans unable to distinguish them from similar shape-changing spirts. They are frequently attacked on-sight by humans once their dual nature has been revealed. Others, such as the Tanuki (Racoon-Dog) Hengeyokai are often mistaken for spirits of a more mischevous, but no less unwelcome, nature. Consequently, those Hengeyokai sufficiently fascinated by humanity to move amoung mankind for any given period of time would be well advised to kep their racial abilities hidden from their neighbours as much as possible.

Due to their position outside human social structures as well as their somewhat chaotic nature, Hengeyokai are extremely limited in their class selections. Nor do they take on positions of power in human society at name level, for they have neither the patience nor the inclination to rule over humanity. Good aligned Hengeyokai may appoint themselves the protector of a given location or human settlement, however, and expect very favorable treatment in return. Hengeyokai do not acquire followers in the manner of human, spirit-folk or Korobokuru characters. Even if their chosen class would normally permit it.


Common Racial Abilities:
Shape Change: All Hengeyokai possess three forms: their human form, a hybrid form and their animal form. The particular animal form is chosen at character generation and cannot be altered thereafter. Damage, AC, movement rate and stats for the character while in their animal form are outlined in the table below. The character can change forms only once per day per character level. This means that a first level character who changes form from human to animal one day, will not be able to change back to it's human form (or adopt the hybrid form) until the next day.

Animal Form: When in animal form, the character appears as a normal animal. Since this is a natural rather than a magical transformation, the characters true nature cannot be detected by spells that detect magic or illusions save for spells such as Wish or True Seeing. In animal form, the Hengeyokai has the  movement rate, abilities, AC, attacks and damage of the animal as shown in the table below. In animal form, the Hengeyokai gains 120ft Infravision and the ability to speak with all normal animals of the same species as his animal form. Given the limitations of animal intelligence, such conversations are likely to centre around the presence of food/predators, weather etc. The animal will not be able to divulge complex information regarding human society or even reliably identify one human as opposed to another. The character retains his ability to understand other, non-animal languages, but cannot speak any language other than his animal language while in animal form.

Hybrid Form: When in hybrid form the Hengeyokai appears as an anthropomorphic version of his animal form, standing on two legs (or fins) and with functional hands and arms. A Hengeyokai cannot fly in hybrid form, even if his animal form would allow him to do so. Otherwise the Hengeyokai retains the general features of his animal form including fur, scales, wings. tail etc. In hybrid form the Hengeyokai can speak with animals of the same species as his animal form and can communicate normally with other humanoids. In effect, the Hybrid form character can speak any language he knows. He retains the 120ft infravision of the animal form and can use weapons as normal. He cannot, however, wear any armour, items or other equipment that has not been specially designed for his hybrid form. The Hybrid form has a base movement speed on 120ft and swims as a normal human. Even carp hybrids require air to breathe. Carp Hybrid-forms do not have the ability to breathe water. Hegenyokai in Hybrid form as easily identifiable as being something other than human -even when wearing bulky or concealing clothing. Hybrid form characters may cast spells and otherwise use their class abilities as normal.

Human Form: While in human form a Hengyokai is, mechanically and physically, a normal human character with the exception of one or more minor distinctive features related to his animal form -such as a sharp nose or round, fishy-eyes. To all intents and purposes the character is a human. In this form, the character looses the ability to speak with animals but retains the ability to understand what an animal of the same species as his animal form is saying. Like the animal form, this form is not magical in any way. It is not an illusion. A Hengeyokai in human form cannot be identified for what he is using any magical means short of a wish or True Seeing.

Stat bonuses: Each Hengeyokai sub-type gains different racial bonuses to stats in accordance with the aforementioned table. Characters who wish to be Hengeyokai must have stats that fall within the racial minimum and maximums described below AFTER racial modifiers are applied.

Languages:
Hengeyokai speak their own racial language, the common trade tongue and the court tongue. They do not gain bonus languages for high intelligence scores. They may speak with normal animals of the same species as their animal form while in animal or hybrid forms.

Permitted Class Options:
Residing as they do entirely outside the normal caste structure of the oriental adventures setting, Hengeyokai characters are limited to the following classes: Shukenja, Kensai, Bushi, Wu Jen. If demi-human level limits are in use then the Hengeyokai may advance to 8th level as a Shukenja, 6th level as a Kensai, 9th level as a Wu Jen and unlimited level as a Bushi. If the level-limit are not being used then Hengeyokai suffer a 15% XP penalty for the purposes of advancement in level.


Racial Limitations:
If the characters maximum and minimum ability scores do not fall within these limits after racial modifications then the character cannot be Hengeyokai.
Strength: 12/18
Dexterity: 9/18
Constitution: 12/18
Intelligence: 12/18
Wisdom: 12/18
Charisma: 12/18

What I don't really understand is why did you leave out inu (dogs)? There's a significant anime series that centered on dog youkai, after all, so it's not like they're obscure.

I like them and their abilities...good description and background.

Hi Faoladh. I left out inu yokai as a separate option because there's already an entry for "dogs" under Tanuki. I know, Tanuki and Inu arn't quite the same thing, but their gaming stats would be mechanically close enough not to merit duplicate entries on the table. I've changed the entry for Tanuki to Tanuki/Inu on the table though following you comment.

Nice work there, keep 'em coming and I'll keep putting them out there for my players to use.

Keep those suggestions coming Faoladh. They're appreciated. And thanks again Jagatai.