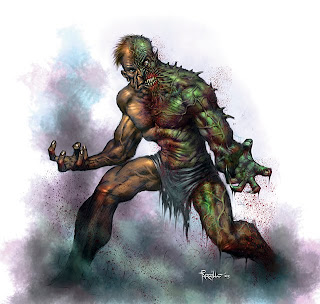 One of the most fascinating variations on traditional fantasy tropes within the Harn setting is the world's treatment of undead. While other settings have skeletons, zombies, wights, wraiths and much, much more besides, Harn has the Amorvin and the Gulmorvin. Or rather, those souls exposed to the Shadow of Bukrai who chose to embrace a new existence in undead form, and the animated bodies of souls which choose oblivion instead. The former, mostly corrupt, evil and decadent beings to begin with; become the Armovrin: intelligent, evil beings who seek to subsume the world into chaos by spreading the taint of Shadow. The latter are those souls which refuse the Shadow (and who fail to resist it's influence) only to be utterly destroyed, their bodies no more than an empty, mindless which barely contains the Shadow essence within.

Both forms of Undead serve the mad God of Death, Margoth, a being who sought to possess Bukrai and was instead driven mad by it's influence. Bukrai is a primordial force, representing the very chaos of the primeval universe. A being which embraces oblivion and destruction. Though once he sought to master Bukrai, Margoth has long-since subsumed himself to it's foul purpose. Many Amorvin, perhaps even the great majority, were once mortal followers of Margoth who chose to “live on” in his service, long after their mortal existence had ended. In all Kelestia, the world of Harn, only one being, Bukrai, has the power to destroya soul, utterly. It is a power it employs both greedily and often. Soon it will have amassed an army large enough to eradicate every living thing on Harn. And after it, the world entire.

Amorvrin are created from a living body, near-death and infested with Shadow. Gulmorvrin can are created from the empty shells of the recently dead. The Shadow's pernicious influence greatly slows the process of decay, allowing some of it's to retain a certain “life-like” quality for decades, while others gradually fade away into nothing. While Amorvrin seek to further the influence and power of the Shadow throug intrigue and violence, the Gulmorvrin exist in a state of near-limbo, stored away in vast vaults until called upon by the clerics or Amorvrin of their faith to take action.

Harnic undead cannot enter any place consecrated to a deity other than Margoth. Pious followers of any deities (paladins, druids, clerics and even 0 priests) may use the holy symbol of their faith to repel such creatures. In OSRIC-Harn, this will permit such characters, of any alignment, to Turn Undead. However, only Priests of Margoth may rebuke or command them. The Undead of Harn do not suffer injuries as do mortal creatures Some may even only be harmed by magical weapons. Therefore the Undead of OSRIC-Harn are immune to backstab damage. When destroyed both Gulmorvrin and Amorvrin crumble to dust, but unless slain by a consecrated (blessed or undead bane weapon; including holy water) Amorvrin will reform in their lair, ready to take revenge, within 13 days. While all undead exist as (and exude) pockets of the Shadow, Amorvrin are more dangerous in this regard than the mindless Gulmorvrin.

Nor do the undead of Harn share a common appearance. The Undead of Harn decay over the pasage of long years,their bodies becoming more skeletal and eventually more ethereal. They “decay more slowly” than natural corpses, in a process that can require hundred of years (longer, if the right balms and herbal treatments are applied). OSRIC-Harn undead are just as likely to be skeletal as they are fleshy or etereal. Consequently, the undead of the OSRIC-Harn campaign are not divided into Armorvrin and Gulmorvrin based solely on traditional, arbitrary expectations of which “type” of undead constitutes a “free willed” or “mindless” monster. In efect the traditional concept of mindless and free-willed undead has been on it's head.

OSRIC-Harn undead are not divided into Amorvrin and Gulmorvrin based on arbitrary notions of sub-type. Instead, they are defined based on their hit-dice (when alive) and whether or not the soul of the dead being chose to accept Shadow or attempted to deny it. OSRIC-Harn will therefor e have Amorvrin zombies just as it will have Gulmorvrin vampires. No player can ever be sure that the "zombie" they face is "merely" a 2HD monster. It could very well be a 4HD monster with the sleep spell memorized..

Some distinction is possible. Both types of undead exude a sense of cold, of decay and evil in the form of a palpable, shadowy aura. Observant players might be able to distinguish between the two based on behavioural cues. However, the most common means of distinguishing between brainless Gulmorvrin and cunning armorvrin is by the shadows tht envelop them. That it, by the presence of lack of a Shadow aura. A dim, shadowy manifestation of intelligence and free will in the form an inky black mist drifting lazily about the undead form) happens to be. It is this aura that facilitates the corruption of otherwise pure souls by the Almorvrin.

Amorvrin undead of a given "sub-type" are considerably more powerful -and dangerous- than their mindless, Gulmorvrin counter-parts. Amorvrin undead types will be turned as though they were two steps higher on the turning table than the “standard” Gulmorvrin version. Amorvrin who advance under this rule to the extent that they “ fall off the top” of the table cannot be turned by any means. Neither form of undead, no matter how powerful, may ever be able to step onto consecrated ground. They are so impure, the ground itself refuses to accept their presence in a place of reverence and veneration. Any creature that tries shall be smote down by the very gods themselves.

MYRVRIA AND THE "UNHOLY OATH": 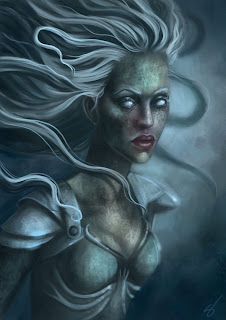 Any creature engaging an Amorvrin in melee risks corruption and death from exposure to the Shadow. Any character in such a predicament must save vs Death magic every other round of melee combat or become Tainted. Tainted characters cannot heal lost hit points by any natural or magical means until a Remove Curse spell is received. If the character dies (or falls into negative hit-points) while under the influence of this curse, he will receive a visitation from the demi-goddess, Myrvria, who will offer him “eternal life” (as an Amorvrin) and his “heart's desire”. All for the small price of taking the Unholy Oath:

“To own myne form, when breath Hath fled, shall I gift myne soul.”

Uttering this oath thirteen times binds the soul to Morgath and allows the Shadow to mould and shape it. Characters who accept the pact rise from death thirteen days later as an Amorvrin of a type with a number of hit dice equal to (or less than) his own. He cannot be raised or reincarnated, not even by a true resurrection or divine intervention. His soul is gone. Utterly consumed by the Shadow. Once this pact is made, only a “true” death at the edge of a consecrated blade will save him. If the dead or dying character refuses to take the oath, he must make a final saving throw against Death magic upon reaching -10hp. If he succeeds, his soul has fought off the Shadow infestation and, while he is still dead, the character may be raised by normal means. If the test is failed, his soul is consumed as before, and the corpse shall rise as rounds as a Galmovrin.

This occurs on the 13th round after death. The character becomes a Galmovrin of a type possessing a number of hit dice equal to his own or less (DM discretion). He will be fully under the control of the Amorvrin or the Spellcaster who created him. Like a character who accepted the Unholy Pact, his soul has been utterly consumed and is now beyond even the power of a God to recover.

Any character reborn as an undead being must change his good-evil alignment track to Neutral evil. All Gulmovrin are considered lawful evil, regardless of previous alignment. 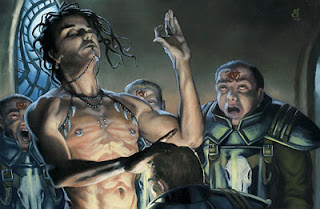 Recently slain characters (killed within the last 13 rounds) whose body is affected by a raise dead spell must also succeed on a Death saving throw or suffer the destruction of the soul and rise again as a Gulmovrin.

If the character has been dead for longer than 13 rounds, he does not need to make this save. His body will rise as a Gulmovrin, but his soul is safe in paradise. A character whose soul has not been consumed by the Shadow but whose body has been animated as a Gulmovrin can be raised as normal provided “his” Gulmovrin is slain. Thereafter, a Remove Curse spell must be cast upon the body. If the Shadow remnants lingering within the corpse is not removed from the body prior to the character being returned to life, then the dead characters soul is called back to his body and consumed by the taint still within the body. At the DM's discretion, the corpse will again rise as a Gulmovrin 13 rounds after spell completion. On very rare occasions however, part of the characters soul might survive the botched process. In which case the character rises as an Amorvrin 13 days after spell completion. An especially unpleasant fate for the character if his corpse has since been buried in consecreated ground during this time.

ATTITUDES TO THE UNDEAD:

Needless to say, were the lore concerning how swiftly a single Almovrin can create a horde of fell followers to become widely known, no man or woman in Harn could ever sleep soundly again. Therefore, the churches and faiths of Harn guard this knowledge jealously, allowing the common folk and nobility to hear only the vaguest rumours of Undead creatures and their power. The church of Margoth is an exception. They want people to be afraid, but are unlikely to be believed. Starting players, therefore, should be unaware of much of the above information. Knowing only that certain restless dead are rumoured to walk and that the power of faith is said to repel them. Perhaps only a cleric or paladin of Larani (who is Margoth and Bukrai's most unyielding foe) might have an inking of the greater truth.

The Gods of Harn may be divided on many thorny issues, but on one thing (and one thing alone) do they agree. The spread of the Shadow-taint must be combated by every means at their disposal. Even Paladins of Larani and anti-paladins sworn to Agrik have been known to (temporarily) set aside their differences against this common foe of life itself.
Posted by Dangerous Brian at 15:59