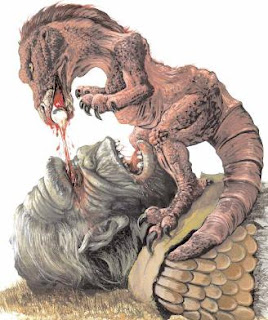 The Vlasta, or Eaters-of Eyes, are amongst the most common (and the most feared of Ivashu). Hunting in packs, the Vlasta roam throughout Harn, attacking intelligent prey and animals alike. Feared for their sharp beaks, their ability to leap great distances and penchant for devouring eyes and sexual organs, Vlastu are hunted wherever, whenever, they are found.

These small beasts rarely exceed a height of two feet, yet their powerful tail and muscular legs allow them to move at great speed and leap distances of up to twenty feet from a running start.

Most often encountered in caverns or subterranean ruins, they hunt at night, emerging on the surface to find and devour prey. Though they mainly subsist on small rodents, they view man-flesh as a delicacy and have been known to pursue fleeing men great distances in search of a special meal. Luckily, they are light boned. Even a glancing blow can leave A Vlastu crippled and easy prey for its companions.

In combat, the Vlastu leap upwards to attack their foes, oft times using weight of numbers to overbear a foe and bring them to ground. Their preferred targets are the eyes of their foes: when rolling a natural twenty on their attack roll, a Vlastu will inflict maximum damage and has a chance to pluck a randomly determined eye from it's socket. The victim must save vs spells in order to prevent this. Only characters wearing full, face enclosing helms are immune to this effect. Upon plucking an eye, a Vlastu will immediately break of it's attack to spend a round savouring (and devouring) it's prize.

Note: Vlastu may be summoned by a Cleric of Ilvir (ie: a druid) using the Animal Summoning spell.

Tactics: Vlastu will attack using pack tactics, often with one member acting as a lure or distraction. They will swarm a single target if possible, overbearing it and savaging it with their sharp beaks. Once a foe is slain they will attempt to attack anyone approaching the corpse. If left in peace to devour their prize, they will not pursue for 1d4 hours while they feast.

Posted by Dangerous Brian at 20:58