Sir William Marshal (1146 – 14 May 1219), was the greatest, most famous knight of his time. A real life paragon of the chivilric ideal, he was greatly admired even by his enemies. Many are even said to have attended his funeral.

He rose from disgrace, the son of an traitorous robber-baron, to become the most famous knight in Christendom, 1st Earl of Pembroke and personal friend and confidante to generations of England's Kings: Stephen (arguably), Henry II, Henry "The Young King", Richard d' Lion-heart, the much-maligned King John and Henry III.

Before him, the hereditary title of “Marshal”, designated the head of household security for the king of England; by the time he died, people throughout Europe (not just England) referred to him simply as "the Marshal".

Read a little more about his life, and find out why he can be an Old School Inspiration, both to your players and for your own campaign.

Sir William Marshal was the son of the villainous John Marshal, a robber baron who used the chaos of the “Anarchy Period” to enrich himself at the expense of other lords, frequently switching his support from King Stephen to his rival, the Empress Matilda. So villainous was this lord, that he broke an agreement with Stephen to surrender his castle while under siege. When reminded that his son, William, then a mere child, would be hanged in forfeit, Sir John (who had his wife with him in the castle) is said to have scornfully replied, “I have the hammer and anvil with which to make more and better sons.” Stephen, justifiably regarded by historians as a good man; but too kindly and soft-hearted to be called anything other than a poor King, took pity on the boy and, after ordering him taken down from the gibbet, spent the remainder of the day playing with the lad and his toys instead of assaulting the castle.

The younger son of a minor knight, William inherited no lands of his own. He was squired to a major landholder in Normandy, who was said to be his mothers cousin. William was knighted in 1166 while serving in a campaign in Northern Normandy, fending off a Flemish invasion. In his first skirmish he managed to fell several knights, but was so caught up in the experience of his first battle that he failed to take any for ransom. In 1167 he entered the Service of the 1st Earl of Salisbury, whom Henry I sent to help defend the lands held by his wife, the famous Eleanor of Acquitaine (see the forthcoming article). When the Earl was killed in an ambush, William stood his ground over his lords body while others fled and was captured as a result. A penniless knight with no-one to pay his ransom, he would likely have been executed . Yet Eleanor, impressed by his loyalty and bravery, paid the ransom herself.

Thereafter he made a living as a tourney knight of legendary skill. It is said that, on his deathbed, he recalled having bettered over 500 other knights on the tourney field. William was not a man known to boast. Indeed, by 1197, despite having no significant lands of his own (yet), his winnings were so regular and so lucrative, he could afford to keep a company of knights in his service.

In Service to the Young King:

In 1170, Henry I appointed the (already legendary) Sir William to the household of his son, Henry the “Young King.” At this point in history, young Henry was already known to be ambitious, reckless, a poor administrator and intemperate in his spending. It seems likely that the far more virtuous Marshal was placed in the Young Kings household to keep him out of trouble. The Young King idolised Marshal, who seems to have taught him a great deal. The Young King became something of a legendary Tourney Knight himself under Marshal's tutelage. Marshal is believed to have councilled against the Young Kings abortive rebellion against his father in 1174-1174 but, in keeping with his honourable reputation, Marshal was the Young Kings most ardent and loyal follower during the war, regardless of any personal misgivings.

His position of favour made him many rivals however, and in 1182 he fell into the Young Kings disfavour. He thereafter entered into the service of another powerful magnate and tourney knight, Phillip of Flanders. However, he remained loyal to his lord, the Young King, even when the Young King himself was disloyal to him. He returned to aid the Young King in his second rebellion against his father and, when the Young King died of dysentery in 1183, William was one of the few who did not desert him on his deathbed. Some claim that it was William himself who took the news to the “Old King”, Henry I. With the Old Kings permission, William fulfilled the Young Kings oath to go on Crusade by wearing his dead lords' cloak on Crusade to Jerusalem. 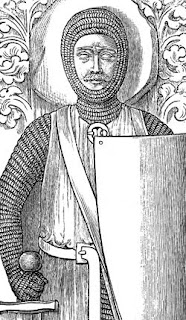 Upon his return, he was rewarded with great Royal Favour, being granted control of Royal Lands and the guardianship of the lady Heliose, heiress of Lancaster. It has been suggested that Henry expected Marshal to marry the lass, as was his right, and take her lands for himself. But for whatever reason he did not do so. The more romantic version of his tale has it that Sir William felt it would be not be right to marry what amounted to his own adopted daughter. However, this was a common (and not entirely scandalous) practice of the day.

He also spent time in the household of Prince John, accompanying him on his abortive trip to Ireland, but had far less success in reigning in the spoiled and treacherous John than he'd ever had with the Young King.

The Turbulent Reign of King Richard.

In 1189, during one of the future King Richard's rebellions against his father, Marshal unseated his future King. It is clear from contemporary accounts, that William could have killed the boy (already a famous warrior himself) had he willed it, but instead slew Richards horse to make his point. When Richard left on the 3rd Crusade, Marshal was appointed to the Regency council to govern in his absence. He remained loyal to the Kings appointed regent, his brother John (Marshals former pupil) for much of the regency period, even when John expelled Richard's Justicar (a near-treacherous act) but eventually joined the rebellion against John (in King Richards name) when the Prince's deprivations became too much.

During this rebellion, Williams elder brother John remained loyal to the Prince and fell in battle. King Richard allowed William to inherit his brothers lands and titles, including his hereditary position as Marshal. William then accompanied Richard on his campaigns in France. While Richard lay dying on his death bed, he appointed Marshal Constable of Rouen and gave the Royal Treasury into his custody.

The Honest Broker, in service to a Tyrant:

With Richards death, John, the new King of England, also inherited the loyalty of William Marshal, who supported John over the claims of his nephew, Arthur of Brittany (the young son of Johns dead elder brother Geoffrey). He defended Normandy on the Kings behalf, but he and John had something of a falling out when John abandoned the Duchy to the French in 1204. During the signing of the treaty with the French King, William paid homage to the French King for his lands in Normandy (as was the honourable thing to do) making it clear that he would pay the French King his dues, but would still consider John his overlord above even the King of France. However, this act, however reasonable by the standards of the time, caused a rift between John and Marshal.

Yet despite this rift, when the Barons rose against King John in the First Barons War (leading to the signing of the Magna Carter) Marshal was one of the few Earls who stayed true to his King. Indeed, when John died, the King appointed Marshal, the one knight in all Christendom whose oath and loyalty could be trusted, to act as regent for his nine year-old son, Henry III. In fact, it was William himself who made the arrangements for Johns funeral. He would spend the remainder of his life defending Young Henry III from threats both foreign and domestic, even going to so far as to ratify the second signing of the Magna Carter on his young King's behalf. 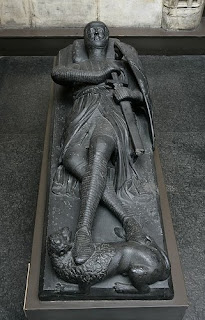 The Best Knight in Christendom:

Throughout his life, in a time where men changed their loyalties more frequently than whores changed clients, Williams loyalty always remained constant to one man: his King, whoever that man might have been. Even his “rebellions” were in the service of one King against another (in the case of the Young King against the Old) or in the service of a King against an usurper. So highly regarded was he for his fame and loyalty to the Crown, that even men he had previously fought against (such as the "Old King" Henry I, Richard even John) knew he could be counted upon and trusted with their lives. Indeed, during John's disastrous reign as King, it was Marshals reputation and statecraft that kept the Kingdom of England alive and prosperous. While it was said that no man could trust the word of King John, the saying also went that there was not a man alive who could not trust the word of William Marshal.

William Marshal is the ideal knight of his time, a veritable Paladin. In Old school Terms, he clearly qualifies as Lawful Good, serving his rightful lord with loyalty and honour while, at the same time, trying to steer that self-same lord away from evil or chaotic acts. In this regard, his life makes him an ideal role model for lawful good Paladins, Cavaliers and Rangers. Especially those who must serve less than admirable masters.

Finally, from a DM's point of view, Marshal is the ideal political ally for a band of “good” adventurers. He can be a patron or sponsor (especially of “knightly” characters) and works best when used as an influential “good” patron in a region or Kingdom otherwise overrun with lawful neutral or lawful evil types such as would be common in a feudal society. However, more interestingly, his loyalty to evil masters also makes him an excellent foil for characters looking to topple the likes of a King John. In such instances, the players might find themselves and your campaign's "Marshal" on opposite sides, creating one of those rare, plausible opportunities for good vs good conflict that was such a staple of the Old School genre at various times.

At the very least, even if Marshal and the PC's never see any actual conflict between them, his mere existence in the campaign can be a reminder that not everyone who serves a Kingdom of evil can truly be considered evil themselves.

Posted by Dangerous Brian at 15:03