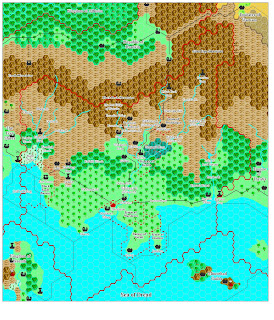 Well, despite the fact that it's ever so slightly crept up on me out of the blue, the current OSRIC campaign seems to be going really well. Even before the end of the first session I had a feeling the players wouldn't be satisfied by a simple one-off "pick-up" game. In many ways, the spontaneous birth of this completely unexpected campaign makes it all the more thrilling for me as a DM. Given how easy it is to arrange a compatible gaming time-table when the occupants of just two-households are involved, it looks like I wont need to wait till march to get a regular game going after all. 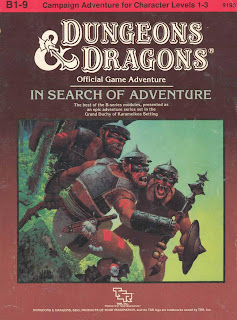 On the other hand? Well, I have absolutely nothing prepared. I'm basically having to make up the sandbox as we go along. Real "seat-of-the-pants" stuff, especially for a compulsive (near anal) planner like me. Luckily, I've been using the Castle Caldwell chapters from the excellent B1-B9 "In Search of Adventure" module compendium. So I already have a very nice little min-campaign using the Karameikos setting to start me off in. The module compelition suffers from having been "thrown together" from various modules long after they were first written. But hey, isn't that how most sandbox campaigns turn out? A number of pre-published adventure modules crammed, poked, probed and kneaded until they fit into a game setting? The "module" plenty of plot hooks as you can see. While it's adventures are laid out in a "flow-chart" progression leading from one to the next, it hasn't been difficult to adapt it into the beginnings of a proper "sand-box" campaign . Although I'm not very familiar with the Mystara setting, I have all the Gazetteers and Hollow World supplements. Far from being a problem, this makes the experience for me all the better. Not only am I getting to run a campaign, I'm getting to "explore" a new setting, in much the same way as the players are. There are just as much surprises in store for me as there are for them.

So far I've been able to stave off being over-whelmed by player enthusiasm by providing my players with the Grand Duchy of Karameikos supplement. Hopefully that'll buy me some time to do some more prep work before the next game. My major concern is that, given our current rate of play, the head start afforded me by the B1-9 supplement might not be enough to keep me ahead of the players. Limited prep time might result in my running some modules or home-brew scenarios before I've had a chance to properly prepare them or integrate them into the setting.

As a consequence of this, I'm going to have to put the development of my Harn and Hyborian Age sand-boxes on hold for the time being. For the foreseeable future, most of my efforts will be directed to building upon the strong foundations provided by B1-9 to create a proper, working sandbox setting. Most of what I get up to will be posted here, of course, but it does mean a very sudden, near-total shift in direction for the blog thus far. I will certainly finish off the Necromancer series of articles, but I expect they will be the last non-Karemiekos posts for a very long while. At least until I can establish a more comfortable buffer zone of preparedness for the current campaign. I realise that three game sessions in less than a week is rather a lot - frankly, I'm not convinced the players will be able to (or want to) maintain such a pace, no matter how much they're enjoying the game - but with the weather the way it is just now it's not as though we have many alternative sources of recreation right now.

Which means lots of hard work, hard-gaming and fun times ahead.

Which is, frankly, serendipitously, awesome.
Posted by Dangerous Brian at 21:18