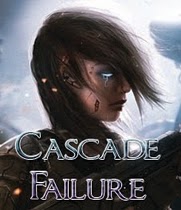 Cascade Failure: the new OSR sci-fi beta from Greg Christopher of Dark Horse Games (downloadable FREE here). Now at the top of my “to play” list and well worth a look. While the current release is merely the first “beta' version and has a long way to go before becoming a fully rounded, finished product, it already promises to become a real gem of a sci-fi game.
The first factor that sets this game apart from it's competitors is it phenomenal and highly evocative artwork, which easily captures the sense of a post-collapse high-tech society on the brink of utter catastrophe. While the artwork alone is reason enough to give this game a look, and sets a high bar indeed for expectations of quality, the rules system itself more than lives up to the promise of the artwork.
Character creation follows the standard D&D format, but with a wider range of classes available than normally appear in OSR D&D science-fiction adaptations: that is, beyond the usual tech, solider and psychic class options. With eight classes to choose from (including a variety of tech and combat specialists and two psychic classes) each with their own distinct class abilities and team niches, ample options exist to differentiate one character from another. This diversity of choice is further supported by the ability to acquire 'Gifts' for your character as they progress in level (one of the few 3rd ed D&D developments that I ever actually rather liked). Thereby ensuring that no two soldiers, outlaws or slicers need ever be mechanically the same.

Racial options are also attractive, with some of the best (and simplest) rules depicting A.I (“Droid”) characters that I have seen in recent years. The Alien species presented as PC races in the beta are also excellent, featuring outstanding racial descriptions and traits that (for the most-part) will help players portray a true alien psychology as opposed to the all too common “man in a rubber suit syndrome”. No “space-elves” or 'space-dwarfs' for us here, though one or two races have similar elements of psychology or culture in their make-up.
Like many D&D clones Cascade Failure includes an alignment system, but one less restrictive than that found in many systems. Combat, on the other hand, uses an ascending AC system designed to represent how difficult it is to injure a target rather than to actually hit it. The injury system is an elegant and surprisingly obvious way of balancing the traditional acquisition of more hit points per level with the deadliness of science-fiction weapons. As with the old D20 Star Wars system (which Cascade Failure improves upon) hit points do not represent how much injury a person can withstand but rather how good they are at dodging out the way. Hit Point damage reflects a combination of near misses with bruises, aches and physical fatigue acquired from close calls and throwing ones-self about the place to avoid been hit. As any modern soldier will tell you, it's more difficult to score an effective hit on an experienced opponent in ranged (or for that matter, melee combat) because they make better use of cover and are generally more willing to inflict bruises and minor injuries on themselves by diving onto rubble and throwing themselves about the place than a novice is. 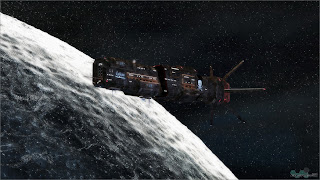 Where Cascade Failure improves upon the old Star Wars injury system is that, rather than losing 'wound points' after reaching zero hit points, in Cascade Failure you begin to take ability damage. This reflects the character taking a serious wound (or wounds) that would normally put him out of action. This temporary ability damage can be recovered with successful medical treatment, but a time window exists beyond which medical treatment would prove ineffective and the ability loss becomes permanent. Droids take damage in the same way as organic characters except that the ability damage is never permanent and can always be repaired when sufficient spare parts are available.
Like any beta, the existing version of cascade failure does have it's flaws. There are the usual handful of rules omissions that slip through proofreading that can be fixed with the application of house rules or a little common sense until the next version is released (or until they are officially errata'd). Likewise, the present vehicle and starship rules are sparse to the point of being non-existent (I'll be using the ones from Stars Without Number until the ones for Cascade Failure and properly developed). 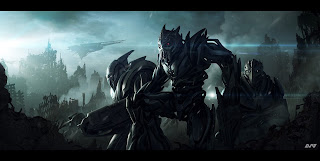 The (optional) setting material provided, is first rate,with a number of intriguing factions and alien races provided. The default setting (of which the artwork is highly evocative) is of a post-collapse hi-tech society with a failed economy and a growing scarcity of resources ranging from population-base to hi-tech skills and materials. However, while the rules system supports this setting extremely well, the rules themselves are highly adaptable. I was immediately struck by how easily the rules could be applied to such diverse campaign settings as the Firefly, Babylon 5, Star Wars, Aliens, Mass Effect and even Terminator universes. Or any other setting (home-brew or otherwise) for that matter.
If the beta is anything to go by (and believe me when I tell you that it is) then the full version of Cascade Failure is set to be an absolute gem of a rules system. I already intend to start a new game using it (I'm already working on a sector-scale sandbox and background storyline) and that is the highest complement for a rules system I know. True, there are gaps in the present rule-set, some glaringly obvious ones even (such as the aforementioned virtual absence of starship/vehicle combat rules). But, even with-out the presence of working vehicle rules, there's enough rules material and setting information contained within this 88 page beta to make for a very exiting, very enjoyable and, indeed, very playable sci-fi retroclone. I can't begin to tell you how excited I am by this product.
Look out for an actual-play report  and some sand-box articles soon.


Dangerous Rating: 8.5 out of 10.
Note: The Artwork used in this review was been donated to Dark Horse Games by the respective Artists for use in the Public Beta. The art has been reproduced here without permission.
Posted by Dangerous Brian at 15:33