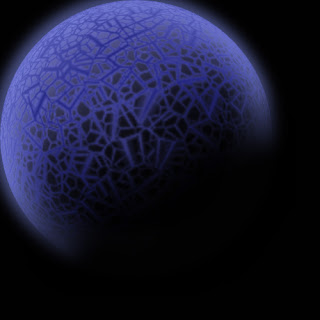 Apanthi. The Lost World. In Urdu the name means: "Wrong Road". Soaring through space without stellar companions of any kind. Once a world not unlike earth, Apanthi is now a ball of frozen gas hurtling alone through space. Alone- but not uninhabited.

GAME TERMS:
Atmosphere:No breathable air or gasses of any kind. Once an inhabitable terrestrial-type world, in the milennia since it escaped the gravitational pull of it's star, all gasses have frozen solid. Consequently, the surface of Apanthi is coated by snow-like layers of various frozen gasses.

Temperature Range: Very very cold - as close to absolute zero is as likely to be found in nature. Light given off by distant stars combined with a tiny glimmer of life that remains in what was once the planetary core are the only natural sources of heat on this dead vagabond world.
Biosphere: None. No life exists permanently on the surface of Apanthi. Gas mining families in the employ of CalCol Corporation exist in temporary residences carved from the frozen gasses that coat the worlds surface, but these habitations are rarely occupied for more than a few weeks at a time.
Perhaps surprisingly, although a void suit is vital for survival, air supply is hardly a problem. When air stocks run low, it's a simple enough matter to dig down through the "snow" to the oxygen layer. A few scoops of frozen air shoved into the internally heated compartments of a specially modified "Apanthi Vacc Suit" will keep a grown adult alive and working hard for some considerable time.
Population and Tech Level:

As many as ten thousand people live a transitory existence between the surface of Apanthi and Tarri Penu, an orbital space station named after a Cythonic goddess placated by human sacrifice. All but a few hundred of these are miners descended from the original indentured workers brought to Apanthi by Calcutta Colonial Interests Inc some fifty years ago when the world was first settled. The original term of service was some seven years but, following the Great Calamity, indenture is now for life. While previously workers strove to earn enough pay pay to prchase transport and a home-stead on another world, now workers strive to earn enough money to pay for spare-parts, life-support and a brief stay on Tarri Penu. At least until their funds run out and they must return to the planet to earn more.
No more than a thousand such miners are allowed to join the Corporate "elites" - pilots, managers, accountants, engineers and so forth- on the space station at any given time. Stays of more than a few days within the stations artificial gravity field (provided by rotation rings) are rare for the miners and their families. Too brief to maintain muscle tissue at the standards required to operate normally at standard G. Thus ensuring that the miners who occupy berths on the station at any given time are too physically weak to cause much trouble for the corporate security and making any possibility of an eventual overthrow of this virtual slave-society extremely remote indeed.
The surviving tech level, both among the miners and the elite themselves, is remarkably high. As one of the main sources of cheap gasses in the sector, Apanthi (or rather, Tarri Penu) traffic control manages a great deal of traffic in the form of independant traders, CalCol ships and even military vessels from nearby systems. CalCol security takes great care to chase away 'claim jumpers" (referring to both freelance mining operations and slavers come to poach rather than sell), people-smugglers and vessels which openly practice piracy nearby, maintaining a small fleet of system cutters, frigates and corvettes to patrol nearby space around the system (always being careful to remain close to the planets weak gravity well).
Culture:
The majority of the CalCol elite (including it's security forces) are of high-caste Indian origin and belong to Hindu families. The worker population is extremely mixed both ethnically and religiously. Most of the original miners were males of Indian extraction, yet after the Great Calamity when it became apparent that the Miner population would have to become self-sustaining, a large number of (mostly female) workers were "procured" from various shady sources in order to replace miners lost through (understandably quite high) natural "wastage'. Which, of course, in this context, refers to death in the line of duty.
As a result of what the CalCol elite refer to as this "cultural contamination" the miner population has become even more contemptible in their eyes. Almost as many miners now die while aboard Tarri Penu (executed for even miner misdemeanours) as die on the surface from exploding gasses and the like. So much so that many miners now feel that staying longer "on world" before returning to the station is preferable to spending more time there.
The CalCol elite exist in considerable -almost paranoid- fear of their miners, which in part accounts for the sheer brutality of their rule. They are terrified about the prospect of sabotage, given that their own station (and therefore they themselves) are so literally reliant on trade for survival. However, what they fail to appreciate is that the miners themselves cannot afford to cut their own throats by sabotaging their own production efforts let alone by conducting grand sabotage against the station itself. No, what the CalCol elite fail to appreciate is that they should be more concerned with is the very real threat of revolution. Recent "acquisitions' of mining personnel have not been screened as carefully as they would like to believe.
The mining population now includes a small but significant core of recent arrivals (whose physical prowess have yet to deteriorate overmuch from Apanthi's pathetic gravity) with scientific, engineering and even military backgrounds - and not one has anything to lose except their lives.
The Sky from Kut:
Other than a tiny and relatively bright spec in the night sky that orbits the world every thirteen hours, (Terri Panu itself) there is nothing to be seen save the distant light of stars. On Apanthi there is no dawn, no star-light and no moon. Only the ever present, threatening void of space above ones head.

Outside Relations:
Although the miners are intentionally kept ignorant of just who comes and goes above their heads, ships arrive hourly from all over the sector to offload vital imports and even luxury items in return for stocks of frozen water, oxygen, nitrogen, carbon, methane and -vital for space travel- the chlorine, fluorine, hydrogen and other gasses necessary for modern interplanetary (but not  FTL) spaceflight.

Travel Advisory:
Due to the extremely high number of violent incidents reported daily in the miner-restricted residential pleasure and residential areas of Tarri Pen, travellers are advised to refrain from entering these areas. There have been occasional reports of crewmen and traders from visiting ships being abducted by slavers for re-sale as miners in recent months. Travelling alone or when inebriated or in the company of strangers is not recommended. CalCol security operatives are know to be brutal and swift in the application of violence against trouble-makers -many of whom find themselves sentenced to the mines below. Discretion is advised.

Posted by Dangerous Brian at 13:11

Whoever controls that planetoid has the big Credits!

Yup, CalCol certainly has the dosh -and will probably have control of a few more worlds as well by the time I've finished the sandbox.

Hopefully by the the Corp will have the makings of being a real campaign-baddie.