Here it is, the first article in my new Cascade Failure sandbox series. You'll note that I'm producing entries for individual systems long before I've even designed the sector map. Don't worry, it's deliberate. I'll be able to start constructing the map once I have an idea of how various systems relate to one another - politically, economically, militarily, etc.

Star and planetary information obtained from Star Gen and thereafter modified. The entry on the settled moon of Kut that preceeds it is all me.

More importantly (for me at least) this is my last ever blog article as a single man. As of the 28th, I'll no longer be able to call myself a bachelor.  That same day, the lass I've been calling my missus for the last four years really does get to become my missus.

I'll be back in a few days. Until then, enjoy.


KUT (Terrestrial Moon of Auqlan A-6) 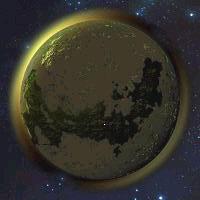 Equatorial radius: 5649.3 Km (0.89 Earth radii)
Density: 5.46 grams/cc (0.99 Earth densities)
Eccentricity of orbit: 0.036
Escape Velocity 9.9 Km/sec
Molecular weight retained 7.4 and above: N, O, CH4, NH3, H2O, Ne, N2, CO...
Axial tilt 22°
Planetary albedo 0.22
Exospheric Temperature: 1187.55° K (-85.45° C Earth temperature)
Length of year: (orbiting planet) 222.85 Earth days 283.81 Local days
Length of day: 18.85 hours
Boiling point of water: 83.4° Celcius/182.1° Fahrenheit
Hydrosphere percentage: 69.3%
Cloud cover percentage: 32.2%
Ice cover percentage: 4.3%
GAME TERMS:
Atmosphere: Breathable Mix. Air pressure lower than comfortable human norms
Temperature Range: Temperate. Somewhat colder than that found on earth at equivalent latitudes and elevation.
Biosphere: Chemical and Biological weapon releases into the upper atmosphere during the Great Calamity devestated the imported Terran biosphere. Only limited numbers of sealed biosphere facilities survived the war.Atmospheric pressure is somewhat low. Visitors are advised to wear breathing apparatus until fully acclimitised.
Human survivors have begun to repopulate the biosphere outside these facilities, but occasional construction has on occasion released fresh stores of weaponized bacterial spores into the atmosphere. Limited progress has been made towards developing new plant and animal strains resistant to these toxins although a human vaccination has been developed. Thus the remaining biosphere is very fragile. Ecological diversity remains very limited even inside controlled, sealed-environment conditions.
Surviving animal species are limited to Humans, Dogs, Cats, Goats, Rats and Cattle. Remaining plant species include several types of cereal, wheat, hops, turnips, carrots, beat-root, onions, peppers, grasses, flowering plants and apples. Some terrestrial insect life is also extant.
Population and Tech Level:
As little as 5% of the planetary population survived the Great Calamity, the majority of whom were either military or civic government personnel housed in bunkers or else agricultural scientists and farmers operating out of sealed biospheric environments.
Several hundred small farms and research facilities are scattered across the planet, clustered on the long, equatorial continent of “Myr”. The combined efforts of these facilities continue to feed and clothe the inhabitants of the three main “bunker cities” of Muscat, Abu Dhabi and Tehran. Each bunker city houses approximately 3000 inhabitants. The local farming and research sites provide the bunker cities with food and fresh water and, in return, are provided with manufactured goods and atmosphere scrubbers produced in the re-tooled bunker recycling centres using freshly mined minerals from the expanding corridors.
Hi-Tech items such as computers and modern weapons require difficult, expensive to produce components and are rare outside the cities. Perhaps the populations greatest asset is it's retention of a hi-tech skill base. Although the planetary populations grip on survival is tenuous at best, it is able to produce a small surplus of food and manufactured goods for trade with passing ships at the Tehran space-terminus.
As the only surviving bunker facility with space-port facilities, Tehran remains the “senior partner” of the three. Despite some recent tensions over trade tariffs, the three cities (though ruled by separate military junta's advised by Shi'a religious leaders) exist in a state of peaceful co-operation, despite frequent military posturing by all party's.
Note that none of the three bunker cities have anything approaching inter-planetary flight capability. A few hover-cars and air-cars remain functional, but that is all. The moon is completely dependant on foreign vessels for interplanetary trade but, due to the small amounts of surplus materials available, rarely receives more than one or two visits a year from traders.
Culture:
Settled by a consortium of Shi'a families from the Arabian Peninsular, faith remains a strong cultural bond between the three bunker-cities, who would otherwise be natural competitors. Though previously ruled in accordance with a corporate model, since the Great Calamity the former Myr corporation's security branch took control of each respective bunker. The three surviving cities each maintained a complete comm's black for several years, explaining why these three facilities survived the war where more than a dozen others did not. Contact between all three bunkers was finally established some 22 years ago. Each city has been ruled by it's own military (or "Public Safety") council since the years of silence. The three councils each send a single representative to sit in the ruins of the old Colony Capitol building (the Al Jalali) for six weeks at the beginning of every year, to discuss matters of common interest.
Gulf Arabic is the only language spoken with any frequency. Several settlers (particularly those who work at the space port) are fairly fluent in either English or Mandorin, but their numbers are few. They are reluctant to teach these languages to outsiders or even to other locals. This ensures that a handful of individuals retain a virtual monoploy on off-world trade.
The Sky from Kut:
At any given time either the Gas Giant (primary day) or the distant sun (night) or several moons (twilight) are visible in the sky of Kut. With more than fifteen other moons orbiting the gas giant however, reflective light is persistent. Even during the “night” cycle, light levels rarely fall below what would be considered twilight on earth.

Outside Relations:
Kut is an isolated world on the fringes of known human space. Other than the infrequent arrival of a few trade vessels from nearby worlds and supply ships from the S.S Ascendant Aurora, it has had no off-world contact of note since the Great Calamity.

Travel Advisory:
Due to the extreme number of moons and the influence of the gas giant itself, sea travel (or indeed, travel in coastal areas) is to be avoided. Tidal activity is unpredictable at best and suge tides of up to a kilometre in height are not unknown in some coastal areas. Finally, those who insist on sea-travel should be advised that the waterways remain full of biological sludge and waste from the Great Calamity. Engine failure on surface vessles due to clogged intakes is a common hazard.

I was clicking between my blog front page and my dashboard when the post hit the pavement. So I was right on top of that shit.

I'll definately be following this!

Hi Brian, congratulations and good luck with your big day!

Thanks Bill. I'll get the next location - a rogue planetoid named Apanthi (Urdu for "Wrong Road") up over the next few days.

Andthanks very much for your best wishes Paul. It was a great day. I'm now throughtly and happily wed.