I finished way ahead of my June quota for the Miniature-a-Day challenge, so June was a good month for painting. I'm still on schedule for July as well. This month, I'll be finishing off the last two squads of "Alliance Marines" for my 15mm Mass Effect games [link] and making a start on some Hoplite and Amazon figures for the Expeditionary campaign. But for now, here's June's minis:

First up we have some giant centipedes from Otherworld Miniatures. Expensive figures but great sculpts. Giant Centipedes are a mainstay of low-level dungeon encounters, so how could I pass these guys up? 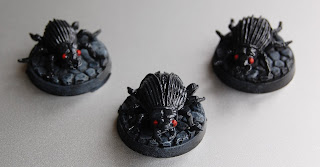 More figs from Otherworld, Giant Beatles this time. I left off the antennae since they seemed too fragile for table-top play. The coat of gloss varnish over the black seemed like a good idea at the time, but it pretty much destroyed my careful highlighting. Ah well. Them's the breaks.

Here we have another six of Mark Copplestone's wonderful colonial marine sculpts. These are available from a variety of companies. Pity, but now that I'm moving over to 15mm for my sci-fi games I doubt I'll ever get round to finishing the platoon. 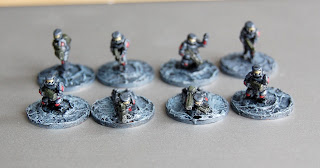 The three photographs above are my Ground Zero Games 15mm New Israeli infantry, painted up as Alliance Marines for my Mass Effect Games. At the top we have first squad. The command team (Lt, NCO, Medic, RTO, 2 AT troopers and 2 snipers) is in the middle picture. The third pic shows my special teams - two dug in sniper teams and a Forward Observer team. 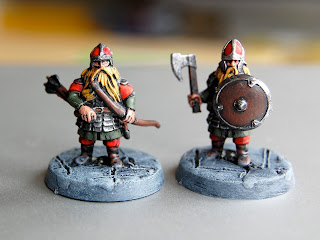 I'm not normally a huge fan of dwarfs. In fact, I doubt I've played a dwarf character in all my life. But these guys will feature very heavily in the Expeditionary campaign (in their traditional role as the "Gods' Own Builders") so I need to get a batch painted up. These two LOTR figures from Games Workshop were the test-run.

Finally, we have some lightly converted Critical Mass 15mm Mercs. It's not clear from this photo but if you look at the head of the pointing figure you'll see I've converted these figures into an Asari Commando unit for Mass Effect Gaming,

Shameless Plug: If you want to know more about my Mass Effect Wargaming/Roleplaying project, please visit my other blog, here.
Posted by Dangerous Brian at 22:48

Looking good, Brian, and well done for sticking to the plan!

Good amount of quality painting, will check out the other blog.

Thanks guys. Publically stating on a blog that you'll paint X many miniatures in a given length of time has really helped my motivation. Even if nobody cares if I finish on target or not, it still feels lke I've made a promise that has to be kept.

Good to get ahead of a challenge. Figures looking good too.