The Mycenean Pantheon is just one of many divine families that rule over the mortals of Edarnia. The majority of clerics and paladins in the new Expeditionary Campaign will be worshippers of this Pantheon, hence I've posted it here for potential players to take a look at. The name and most common title/honorific are given in bold type. Lesser titles are those listed in normal type. It is considered vulgar for a Mycenean to name a god without also using at least the greater title as well, to distinguish the fact the speaker is referring to a Deity rather than any mere mortal with the same name.

Major Gods:
Pysos: The Earthshaker, The Lord of the Flows, The Beast of Darkness. Emperor of Flame. Lord of the Underworld. 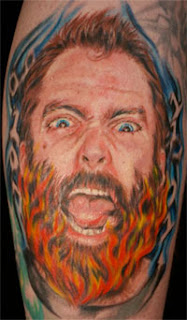 Chaotic Neutral
The Earthshaker is the terrifying, brutal head of the Mycenean Pantheon. An Elder God of mercurial temper and violent rages, many believe it is only a matter of time before this rampaging Deity is deposed by one of the Young Gods of his Pantheon. Pysos is the God of Fire, Earthquakes, Smelting, Miners and Volcanic Eruptions. He appears as a tall, wild-eyed man hurling fireballs, his beard wreathed in flame.
Clerical Weapons: Staff, Javelin, Dart, Spear, Shortsword, Flaming Oil. All Clerics of Pysos MUST choose flaming oil as one of their starting weapon proficiencies. 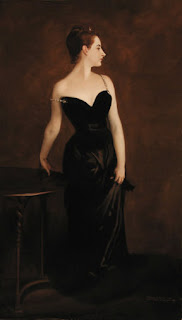 Haestia: Mother of Women. Wife of Pysos, Mother of the Gods, Persecutor of Adulterous Men.
Lawful Neutral
Haestia, wife of Pysos, is believed to be the true power (and stabilising influence) among the Gods of the Mycenean Pantheon, prone to deflecting her husbands rages elsewhere upon those whom she herself feels have wronged her. Though she has been betrayed by her husband many times, ever the faithful wife, she has taken no lovers of her own. Instead seeking to take revenge in subtler ways. Some whisper that is it Haestia herself who is the cause of her husbands madness. Many of her clerics multi-class as Assassins or Magic-Users.
She is the Mycenean Goddess of wives, marriage, morals, hearth-fires and revenge.
Clerical Weapons: Sling, Staff, Dagger, Poison, Blow Gun, Dart.

Dion: The Virgin Huntress. Lady of the Woods. Guardian of Virtue. Queen of the Amazons. Protectress of Mysos. 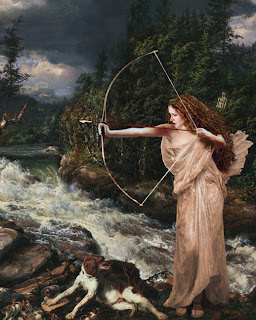 Chaotic Good
Dion is the virginal daughter of Haestia and Pysos, who bears her father an eternal hatred following his failed attempt at rape in a drunken rage. She dwells apart from the other Gods and supports the rights of women in Mycenean society. She is the protector and patron of the city state of Mysos -the only Mycenean city-state where women are the equal of men in all things- and of the Amazons. She remains a friend of her sister, Merax but hates her mother, Haestia, for continuing to support her hated father. She is the goddess of the Hunt, Wild Places, Virginity, Wild-Fires and Freedom.
Clerics of Dion may be male or female, but must remain chaste and celibate. If they break this stringent rule, even involuntarily, they loose all clerical powers unless and until the offending sexual partner dies at the clerics own hand. Many multi-class as fighters or rangers.
Clerical Weapons: Bow, Sling, Spear, Javelin, Dart.
Merax: The Obedient Daughter, the Lady of Law, the Shield of Mycene, Founder of Cities 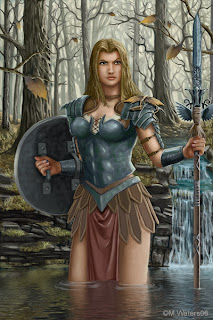 Lawful Good
Merax is the obedient daughter of Pysos, twin-sister to Dion and the patron of law, order and cities. When Pysos, in a black-rage, attempted to rape Dion in a drunken stupor, it was Merax who fought him off, earning her recognition amoung mortals as the protector of law and decency. It is said that while Dion taught the Myceneans how to live and farm in the wilderness, it was Merax that taught them to build and flourish in the cities.
Merax is the Myceanean Goddess of Crafts, Building, Law, Order, Justice and all those who work to further the cause of Mycenean civilisation as it is now, not as it should be (that is Dion's purview). Thus she is popular among city-dwellers of all stripes, but particularly clerks, lawyers, politicians and generals. She is the Goddess of the Forge and a skilled armourer/weaponsmith.
Clerical Weapons: Spear, Shortsword, Javelin, Dart, Sling.

Helkeon: The Bloody-Handed, God of War, Savagery and Conquest. 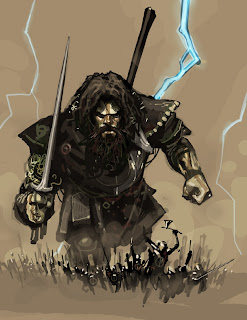 Chaotic Evil
If Meera and Dion represent the best parts of their mother, then Helkeon is all that is worst in his father. A brutal, terrifying God of savagery and warfare, Helkeon is a bloodthirsty maniac, never satisfied or content unless he (or one of his servants) is sticking his spear into an enemy or something else into an enemy's wife. Eternally at odds with his siblings, he fears Merax (for her disciplined fighting style easily overcomes his own berserk indiscipline) and despises Dion, whom he seeks to murder, dismember and display for the delight of his beloved father.
He is the God of Blood-shed, murder, war, arson, rape and pillage. The favoured God of bandits, brigands, pirates, mercenaries and the less-savoury sort of soldier. Needless to say, he is also a very popular God among the Balaerians.
Clerical Weapons: Short Sword, Spear, Javelin, Dart, Morning Star.
Minor Gods:

Few minor members of the Pantheon have a direct blood relationship to Pysos. In fact, most are mortal woman he has bedded, raised to immortality lest they die before he tire of them. Haestia is the avowed enemy of most of these. The other "demi-gods" are most often the children of trysts and the occasional (brief) marriage between Merax and a mortal Mycenean. Her father will not allow her to grant immortality to these lovers however, and so they have been few and far between. The minor gods listed here represent only a partial list. There are many more.
Athlos: Swift-Running Athlos
Neutral Good
Patron God of Athletics, Sports and Gymnasia
Son of Merax and a human athlete named Mesos. Clerical Weapons include: throwing hammer, javelin, dart, spear, short-sword.


Miranda: Far-Seeing Miranda. Lady of Oracles, The Blind Trollop (to followers of Haestia only).
Neutral
Worshipped by Mycenean magic-users and illusionists. She is hated by Haestia even more so that the rest of Pysos' cast-offs since her husband made of gift of Heastia's command of magic to this "blind trollop." Many Mycenean spell-casters continue to follow Haestia rather than Miranda.
Clerical Weapons: Staff, Dagger, Dart,
Fortuna: Fickle Friend or Foe, Lady of Luck
Neutral
Minor Goddess of Luck and Gaming. Worshipped by thieves, gamblers and tricksters of all sorts.
Clerical Weapons: Short Sword, Dagger, Sling.
Infamia: Gossip of the Gods
Chaotic Neutral
Minor Goddess of spies, whispering, gossip and intrigues.
Clerical Weapons: Short Sword, Dagger, Dart.
Tryastia: Maid of Victory:
Lawful Neutral
Minor Goddess of successful endeavours and battlefield victory.

Note: Yes, there is an intended dichotomy here in the nature of the Gods and Mycenean society: Mycenean society is dominated by men, but underpinned and stabilised by the efforts of female Gods. This is, if you like, one of the main themes around which Mycenean's in Zama were built. In other words, behind every great man there's a good woman. Let the controversy begin.
Posted by Dangerous Brian at 18:09

I like your pantheon. Lots of interesting choices and many unique personalities to help drive the politics in heaven that will influence the poor miserable souls on the ground!

Thank you both. Though I suppose it would have made a lot more sense to post information on Mycenean culture for the players first.
Not that I really think they'll need it. How many gamers haven't seen a Ray harry Hausen movie after all?

Pretty awesome stuff. While the first character I rolled up was a pretty average fighter (literally - all stats between 11 and 14), I did get some good rolls for a Cleric should Peliakos, Average Man kick the bucket (likely!).

Maybe it's because I have been reading a lot of Mary Renault these days, but I have been really digging your quasi-Greek/Antiquity approach to this campaign.

The pantheon has some nice distinctions, while keeping it familiar enough for players. It'll be interesting to see how it plays out with the expeditionary stuff.

@WTF: I wouldn't worry about Mr average. he might not have any strengths but he has not glaring weaknesses either -and stats don't have quite the same impact in OSRIC/1st ed as they do in 3rd or 4th ed.
In any case, my old school games tend to be quite bloody, so even a crappy stat-list won't be crippling.

@cktulik: Thanks. I really wanted to set the campaign in my old main-stay of Zama (the city as opposed to the world)but I was worried dumping players whose attendance at games might be a bit patchy into such an unfamiliar cultural setting. Keep reading. I hope you enjoy it.