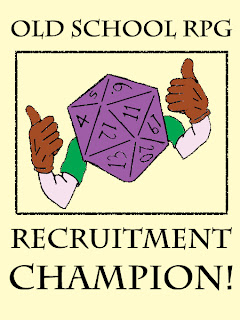 As some of you know, I'm big on recruiting new gamers. I run "cadet" groups for RPG-curious types every other year or so, many of whom go on to graduate to my regular gaming group, or else move on to start up new groups of their own. Yet even so, as much as I strive to bring new people into gaming, there is one blogger who has completely eclipsed all my efforts in this last year:

Beedo, from Dreams in the Lich House. Last year, Beedo ran a semi-regular group for kids in his neighbourhood, mostly around the age of eight or nine. Though he no longer runs this group, one of the other dads has taken up the flame and carried on. Several of those nine year olds developed their RP style well enough in that time to join his "adult" group as regular players. Of those who did not, at least one has gone on to create a pseudo roleplaying game of his own - an RPG based on Pokemon cards which this kid has introduced to several of his friends.

Thus, I can think of no finer person in the blogsphere to receive this, the first Annual (possibly semi-annual, we'll see) OSR Recruitment Champion Award, on what would have been the 73rd Birthday of the father of Old School himself, Gary Gygax.

(Many thanks to my lovely wife for designing the award graphic for me at such short notice).
Posted by Dangerous Brian at 03:12

That's a nice thing to do, congrats to him and yourself.

Congrats to Beedo and that's a great award Brian.