An introduction to the Mycenean (Pseudo-Greek) culture in Zama. You'll notice I'v changed the art style in this (and subseuqent) Zama posts to feature line drawings and etchings over computer-generated art. I reckon these better capture the Old School feel of my campaign setting than modern, computer generated imagery. 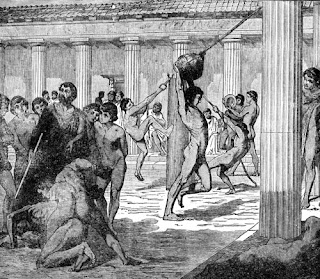 Myceneans:
The peoples of Mycenea came across the Outer Sea from lands now lost some 300 years after the onset of the Age of Conquest, shortly after the fall of the Pheonixian Empire. Invading the lands of the Southern Tuatha about the same time as the Sythians from the East, the Myceneans very quickly established a firm hold over most of the Southern Middle Sea Region, which they retain to this day.
Much of the ancient history of this otherwise knowledgable and educated race was lost with the catycysmic destruction of their homeland or in subsequent internal warfare. It is known that they came from the endless seas to the south of their present territories, armed with sophisticated siege engines and weapons of bronze. While the Tuatha fought individually with weapons and armour of iron, the Myceneans fought united, arrayed with long spear and pike in phalanxes the ragged Tuatha warbands could not penetrate. The tide turned further in the favour of the Myceneans when they learned the secret of iron-smelting from captured Tuathan smiths.
Yet when the Myceneans encountered the Scythians for the first time, it was they, not the Scythians, who suffered the gravest losses. Like the Tuatha, the Myceneans had never before seen cavalry, let alone fought against mounted men in combat. The strangely re-curved bows of the Scythians could easily outdistance all but the best Mycenean slingers. Thus, the swift and elusive Scythian hordes slaughtering phalanx after phalanx with arrow fire, sustaining few losses themselves save in seige warfare.
Only in the close terrain of what is now Canwyn were the slow moving phalanxes able to force open battle, slaughtering the Scythians in their turn. It was in one such battle with the Scythians that the last Mycenean King was killed without a named heir. 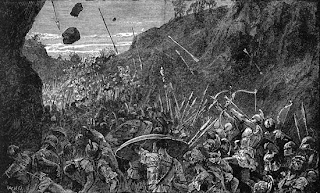 The result was a rush by a multitude of bastards, nephews, generals and brothers-in-law to claim the Mycenean throne for themselves. Even as the war against the Scythians raged on, the Myceneans began to fight amongst themselves.
Mycenea was shattered. In the chaos, an army of Canwyn Barbarians, assisted by a horde of allied warriors from Cerwya, descended upon the unguarded towns and cities of Mycenea, while their defenders fought fell upon one another elsewhere, burning many cultural treasures (including rare manuscripts saved from the destruction of the Mycenean homeland) to ash. Killing all before them, the barbarians drove the fractured Myceneans as far west as what is now called Pergannon. There the defending Mycenean armies met another Mycenean army marching to their relief from the west. This army was led by a man named Zerphon, grandchild of Arramnon, the last King.
Zerphon succeeded in uniting seventeen of the feuding Mycenean cities under his banner. Using cavalry trained by Scythian mercenaries and phalanxes of men armed with pikes trimmed to the size of spears to secure his flanks, he brought the Barbarian tribesmen to battle near the Holy Mountain. There, at the Battle of Balerophon, thirty thousandTuatha died. Zerphon was crowned the”Tyrant of Seventeen Cities” following the battle.
The mighty Tyrant of Seventeen Cities was able to recapture a great deal of lost Mycenean territory, but his successors were far less capable men. Today, the borders of Pergannon end almost within sight of Arka, the capitol, which has become an armed camp. Other than Pergannon itself, no Mycenean state  encompassing more than a hand-full of towns and cities exists. Instead, perhaps three dozen small city states make war on one another in the region known as the Free Cities. These scattered townships with their ever shifting web of alliances seem united only when faced by the interference of outsiders –as both the Imperium and Pergannon have discovered at great cost.
Cultural Traditions: 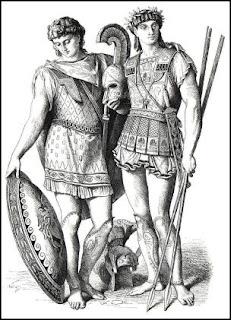 An intellectual yet war-like- people, the Myceneans have a reputation as notorious liars. Their reputation for political and mercantile scheming and intrigues is as legendary as their tempers. While the Myceneans make must of thier loyalty to their home-cities, many outsiders believe that the Myceneans value their individual freedoms rather too much. Often at the expense of their own families.
Myceneans, like many of the “civilised” peoples, tend to stand shy of six foot even at their tallest. Both men and women tend to be lithe of build, though muscular. Most have dark hair and eyes. Men often have considerable quantities of body hair, especially on their arms and legs, which they shave or wax often. Naturally hairless backs are far from common in Mycenean men.
While it is said that Pergannon and the Free Cities are the birth place of all art, culture and philosophy in the world this is hardly the case – as any Parnthian or Pheonixian will tell you. Yet Myceneans and Aryans insist that Pergannon and it’s sisters set the fashion for such things as rhetoric, theatre, wine, art, philosophy, and clothing for most of the civilised world (which, to an Aryan or Mycenean, conviently does not include the territories claimed by Parnthians or Pheonixians).
Mycenean sexual pratices however, are one aspect of Mycenean culture that has yet to be adopted elsewhere. In Mycenean lands, homosexual relationships between men are considered to be the ultimate expression of true romantic love. In fact, the man who loves his wife is often a figure of mockery in Mycenean theatre and poetry. In Mycenean epics, this love between men who are away from home on long campaigns, such as men who serve together on the battlefield, transcends all. Such couplings are known as “shield-pairs”. This custom is far more common in the Free Cities, than it is in the less liberal, more militant cities of Pergannon, whose generals (Strategos') generally insist in separting men who have formed "shield pairs" into a serparate phalanx.

In the Free Cities, marriage to a woman is often seen as a practical affair for the purposes of business ventures and procreation. Of course, with the double-standards typical of Mycenean society, female homosexual relationships, are frowned upon if not banned outright in many towns. Mycenean woman are even more repressed than those in Aryan high society. Woman have only slightly more rights than slaves and are often regarded as the husbands possessions by law. The exception to this is the island city-state of Mysos, where woman have full legal rights and may even elect to accept training in arms -purely for the purpose of defending the city while the men are away at sea or at war, of course. 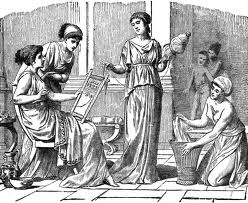 Elsewhere in Mycenea, Women are expected to remain monogamous when in a relationship and to know no lover save their husband in their entire lives. Only men may enjoy extramarital affairs which are considered quite acceptable even by most wives – even when the paramour is another woman rather than a man.
However, should a wife decide to take offence at her man committing adultery with another woman rather than a man, the penalties for both can be quite severe. A wife is quite within her right to murder both her husband and his mistress should she discover them in flagrente delicto. Provided, that is, she does so within three days of “disturbing” the couple. Otherwise, she is treated as having used the affair as an excuse to murder the husband and her paramour for other reasons. Likewise, to kill one and spare the other is also considered murder.
Fashion and Appearance:

Mycenean dress is almost identical to that of Imperials, who copy Myceneans shamelessly in all things save the endorsement of homosexuality. Both women and men often wear as much jewellery as they can afford. A small percentage of Mycenean men have even been known to wear cosmetics into battle.
Daily exercise on the drill field and recreational athletics keep the Myceneans trim and fit until well into their advanced years. Any man too fat or too slow to fit into his armour is considered a fool, a coward and an embarrassment to himself and to his city. Any woman unfit to race is considered a shameful creature undeserving of respect or pity. Even heavily pregnant women are expected to take part in athletic events until only weeks before the expected birth
The average Mycenean is impeccably educated. Even most slaves can read and write. Many poor Myceneans sell themselves into slavery in Zama or the Arcane Imperium. There they are assured of a good life in a rich household and the chance to buy their freedom once the master's children have grown up and no longer require the services of a pedagogue.
Regions:
Myceneans are not great travellers on the whole, as they have an un-savoury reputation in the rest of the world as scheming liars and pederasts. However, their merchants do travel extensively, but most like to return home for the campaigning season, lest they be thought a coward by their peers.
Most cities fight at least one battle with their nieghbours in any given summer. As a result, aside from a very few merchants, slaves and a surprisingly large number of mercenaries (mostly second sons or exiles) few Myceneans are found far from their own city-state. A great many of those who can be found are exiles of one kind or another. Myceneans are prone to exile petty lawbreakers rather than imprison or execute them, ensuring  they become someone else’s problem.
Religion:
Myceneans worship the Mycenean Pantheon exclusively, a collection of harsh Gods and gentler Goddesses that demand much from their followers while promising little in return.
Posted by Dangerous Brian at 13:12