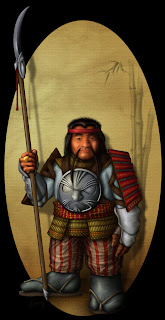 Conversion Notes: I changed the modifiers for magic and poison saves to +1 for every 3.5 points of constitution to bring this racial ability in line with OSRIC dwarves. Exchanged the level limits for the bushi class and the barbarian class. If most Korobokuru are Barbarians, it doesn't make sense for them to be limited to level 10 in that class but at the same time have unlimited advancement as a Bushi. Added the yari to list of permitted weapons as the background material in OA explicitly states they favor the weapon despite it not being on their list of permitted pole-arms.

The Korobokuru have been driven deep into the wild places of the world by the enchroachment of man. They reside in isolated villages and nomadic camps in remote areas of considerable natural beauty, frequently moving on when human settlement begins nearby.

Though many Korobukuru are hostile to the humans who scorn them and drive them from their homes, others, perhaps unwilling to leave the ancestral spirits of their race to the care of humanity, live in human lands still. Some even strive to become samurai.

Korobokaru stand approximately four feet in height, with arms and legs somewhat larger proportionately than humans. Their body hair is thick and course. Many sport unkempt, leonine hair or tangled beards. Their appearance is considered somewhat unkempt in the eyes of the more "civilized" oriental peoples.

Culturally, their society is considered far less advanced than that of their human neighbors. They subside through hunting, farming and fishing. What little art they produce is considered somewhat crude and artless. Their culture is considered somewhat "backward" as a result. Even those who live among humans are rarely afforded the same respect offered to a human of comparable status. Indeed, they are considered rude, pugnacious and even somewhat comical by the rest of world but, in particular, humanity.

Korobokaru tend towards chaotic or neutral alignments. They can be Barbarians, Bushi, Samurai or Wu Jen. Most are Barbarians. Their preferred weapon proficiencies include the yari, horse-bows, blowguns, shortswords, hand-axes and (when they can get them) wakizashi.

Korobokuru player characters should generate a family as per the normal rules for family generation. 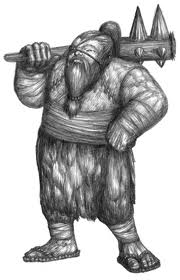 Restrictions:
Languages:
Own tribal language, Common, Spirit-Folk, Hengeyokai. They do not know any alignment languages (assuming these optional rules are used) and may not learn any additional languages regardless of their intelligence score.


Permitted Class Options:
Korobokuru may belong to the Barbarian, Bushi, Samurai or Wu Jen classes only. If samurai, they must serve a human master. If the optional non-human level limits are in use, Korobokuru can advance to level 10 as a Bushi, level 7 as a Wu Jen and level 6 as a Samurai. If the optional level limits are not in use then it instead costs a Korobokuru character 10% more experience points to advance to it's next class level.


Racial Limitations:
If the characters maximum and minimum ability scores do not fall within these limits after racial modifications then the character cannot be a Korobokuru.
Strength: 8/19
Dexterity: 6/18
Constitution: 12/19
Intelligence: 3/15
Wisdom: 3/17
Charisma: 3/16
Posted by Dangerous Brian at 22:32

Nice! Definitely going to lift the barbarian/bushi level reversal and the pole arm allowance, if that's ok. I wish I was into OSRIC, it would make life easier!

You didn't waste anytime getting started on this project. Nice work, good call on the Barbarian/Bushi switch- it just goes further to confirm my suspicions that OA was a rush job. Will you be including Ki powers, and if so, are you going to have multiclassing for demi-humans?

Oh, and I understand your desire to do the Korobokuru first, they are the easy ones. OA races only get harder from here, Hengeyokai and Spirit Folk both present serious overpower issues in play if the DM ignores their role playing aspects or, in the case of Spirit Folk, their natural mechanical weakness.

Glad you've enjoyed the first of these posts guys. I expect there'll be many more. Just not tonight, because tonight is game night!

Just about everything I put up on this blog is fair game for borrowing, either in part or in wholesale. Just drop my name somewhere and I'm happy. Fabian and Jagatai, I hope you won't mind if I do the same with your material. If we're all working on similar projects, it makes sense to help each other along the way.

I'll be using ki powers, but only those listed as part of a character class description. I'll be allowing multi-classing for non humans. The Korobokuru can multi-class as a Barbarian/Wu Jen. I'm hoping that giving Spirit Folk plenty of multi-classing options will go some way toward alleviating the mechanical weakness of the class. For all the penalties that accompany being non-human (limited level progression especially) they don't really gain much in return. I'll also be including the option of doing away with level limits for non-humans in exchange for slower class level progression. I think a 15% Xp penalty for the Korobokuru might be too high, so I've scaled it back to 10%. I think 15% would be about fair for Hengeyokai though. They're advantages are not necessarily as mechanically obvious as the Korobokuru (at least not in combat terms) but a well-played Hengeyokai can be powerful indeed.

I'll be doing away with their alignment restrictions though. Insisting that a raccon -dgp Hengeyokai must always be evil struck me as very strange considering that humanoid raccon-dog spirits are thought of as mischievous drunkards rather than evil creatures. The fox and rat I can understand given Japanese folk-lore, but even so, the alignment restrictions seem arbitrary and pointless. I might observe in the racial description that there are social, roleplaying disadvantages to playing such Hengeyokai because certain types might be perceived as evil, but that's probably as far as it will go.

I have an inkling that you're probably correct in your suspicions that the book was rushed. But I also have a small suspicion of my own that a lot of the errors weren't picked up on because one or more of the editorial staff might not have known enough about the subject matter. Which might explain why the yari issue I picked up on wasn't caught before editing.

Ray, Fran, if you fancy trying things out for yourselves, the gaming links on the right of the blog have a link where you can download the free OSRIC rules. It'll be a while yet before I have enough OA flavoured material finished for you to run an Oriental flavoured OSRIC game without having to do a lot of the work yourself, but you might want to take a look at it. I know how much you guys like your Warring States period samurai wargaming.

Level limits are optional in OSRIC, eh? I guess I should probably familiarize myself with those changes from AD&D. I actually like level limits for demi-humans, but I have a more sword & sorcery view of how things should work than high fantasy/Tolkien-esque idea of the whole thing. More Conan, less Lord of the Rings; so I come away with the idea that the "average" D&D party should be human, and I tend to design a human-centric world.

Not as such. Level limits are optional in my house-ruled OSRIC games. I'm including my house rule as an alternative to level limits. I prefer a humanocentric party too, and I find that assigning an XP penalty to non-humans keeps the numbers in the party appropriatly low as level-limits do. With the added benefit that players of non-humans arn't nerfed at upeer-mid and high levels.