Peoples of Zama: Elves and Shidhe

Unlike the other Zama posts thus far, the information below is NOT common knowledge in the Zama campaign setting. In other words, if you're playing in my Earthshaker campaign, the only way your character will know this information is if your character happens to be an elf. If you aint no elf, you ain't got no clue.

An Exerpt from, "On the Un-Lives of the Eternal Shidhe" 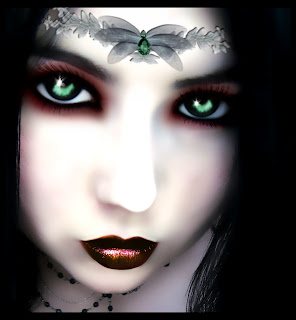 "There are some who consider the Shidhe (and the once-Shidhe) arrogant beyond bearing. In many cases “they” are correct. Yet there are many mysteries concerning this race. Mysteries I shall attempt in some small part to reveal hereafter. Perhaps then “they” will finally understand that the Shidhe have just cause to be overbearing, proud and contemptuous of mortals.
Indeed, this behaviour is hardly surprising when one considers that of the teeming thousands of Shidhe who dwell within the Summerlands today, most can truthfully claim to be older than the Gods themselves. Or at least, that generation of Gods whom we mortals worship today. Indeed, there are many Shidhe still in existence who witnessed, with open mockery, the very birth of our world, Edarnia. Shidhe who poured derision upon the the efforts of the first Gods of Edarnia, those mankind know now as the Primordials, and their efforts to create something new and ever-lasting. For the Shidhe, immortal, eternal, unchanging, perceived theis, the very hubris of the Gods, as rank folly. No-one and nothing, not even the God's, claim the Shidhe, are truly immortal. Nothing save perhaps the Shidhe themselves . Ever patient, ever deceitful,  ever malevolent and mocking of mortals from behind their veils of still living butterflies -stitched together wing to wing- they are no true race as we mortals understand the word. They are in truth, a force of nature. A part of the universal anima itself. Their very existence a law of creation. Some among them -including their fickle and malevolent “deity,” the EverQueen - through subtle innuendo and half-truths, hint of bearing witness to the birth-pangs of the universe itself.
Having experienced such wonders, or heard them spoken of as  living memory, is it truly surprising that the Shihde seem as alien to mortals as we are to them? Mortals, Gods, even the world itself- are but little more than may-flies in the ken of such a folk. Our occasional intrusions into their Summerlands -as we succumb to dreams or flit through their realm in the form of shades awaiting rebirth- are to them the merest speck of a momentary annoyance.
The Shidhe are truly ancient – and alien- in ways we mortals -and perhaps even the Gods- cannot possiblycomprehend. And yet, despite how they perceive mortals, in some ways we are much-alike. The Shidhe feel the baser emotions keenly – anger, avarice, malice, lust, greed- more so even than the vilest of mortal men. Yet in turn they know and comprehend little of gentler, more noble emotions such as love, kindness, compassion and honour-although even they experience such emotions from time to time, although as nothing more than a faint, vaguely disturbing sensation. A moment's perturbation that swiftly vanishes, a tiny drop of human experience in a sea of cruel Shidhe emotions.
Though many -even the Gods- have tried to prove otherwise, no Shidhe can be killed by any means while they dwell within the Summerlands. In the mortal realms they are vulnerbale, but even then they are mighty in power and awesome in aspect. In the Great War between the Gods and Shidhe at the time of Edarnia's creation, countless Shidhe warriors were struck down by the Primordials and their elemental servitors, laughing with ill-humoured mirth even as their disjointed body parts reassembled themselves before the very eyes of their “slayers”. In truth, none save the Shidhe themselves can claim to understand with certainty why the Shihde warriors simply turned away and returned home after untold centuries of ceaseless warfare. I, who have studied the Shihde for many years, I who am myself the son of a once-Shihde- have my suspicions. And they are terrible in aspect. 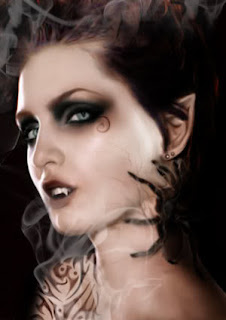 For I believe they simply grew bored.
Boredom is a curse upon these timeless creatures. Having lived uncounted aeons, even their debauched and treacherous tastes must soon leave then indolent with innui. Many Shihde court disaster time and again -risking the terrible anger and rage of the EverQueen- to escape the tedium of their existence. Many choose to plot uselessly against their Queen, or attempt to imprison or torment rivals at court. Or else choose to break the most sacred of law of the Shidhe. The EverQueen, conscious of her folk's eternal nature, has long-since decreed that no Shidhe save she herself may ever bear a living child. Though the act of love-making itself is tolerated, it's consequences can be deadly indeed. Many choose to undertake this dangerous, forbidden act from simple curiosity or from simple malevolent rebellion. Few Shidhe undertake this dangerous pass-time for reasons of love – it being an emotion almost as foreign and repugnant to the Shidhe as the desire to murder a child is to mortals. Instead, such indulgent acts of love-making, treachery and intrigue serve only as simple a distractions from boredom.
Those who do succumb to the slow natural fertility of their race most often destroy the child while still within the womb. Those few who succumb to the unfamiliar emotions that swell within them at the pace of their bellies face an almost unimaginable choice. An eternity of imprisonment in the squalid dungeons of the Shidhe – a fate truly worse than oblivion for the immortal Shidhe- or banishment to one mortal world of many. There to live out the reminder of their much-reduced, near mortal lives as a shrunken shadow of their former power. Such are wretched beings , however beautiful their appearance, for they have lost all that made them who they once were. Knowledge. Wisdom. The memory of lost beauties to which they alone among all living beings bore witness. I know and feel the pain of their loss. My own mother was one of the banished. The unShidhe. An Elf!
Those few who choose so terrible a punishment undergo a painful and humiliating ordeal, a ritual of blood and pain, in which their very anima is torn asunder and merged with the tortured Shade of a some mortal being, plucked for this very purpose from the tortures of the Underworld. The mortal soul is completely subsumed by the process, destroyed forever. Yet a glimmer of mortality remains within the ruined anima of the former Shidhe. The newly-created elf is forever after a mere mortal. Un-aging, yes. But not invincible. Cursed to live a shadowy existence until such time as it's immortal body is slain. Such former Shidhe are as vulnerable to blade and spell, disease and misfortune alike, as we mortal beings. 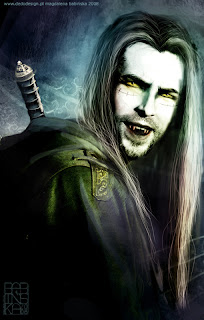 Yet worse still than the fallen state of their once-eternal frame is the ravages of the mind. The memories, skills and knowledge of the transformed are left as thin and ephemeral as a single strand of silk -and equally difficult to grasp. Just as their bodies are warped into a less fearful form by their transformation, their minds are left torn and tattered by the experience. Like a fine silk tunic gnawed upon by locusts, there mind and powers are the barest tattered remnants of what they once were. Such beings as my mother retain their arrogance – for a time- but many, like my blessed mother, mellow in their bitterness and envy with the passing of the years. Some even learn to find joy and blessings in their mortal lives, as though every moment has become more beautiful with the knowledge it may be their last. Yet, just as often the Elf becomes a self-destructive being of hate. Destined for a lonely death at the edge of a blade. A sad fate, for when the unShidhe pass over from this world to the next, there is no relief from their torment. No return to the blessed Summerlands from whence they came. No, not even in dreams can they return there. For they each still carry a fragment of the damned soul within them. A tiny soul-shard that condemns them for a time to the eternal torments of the Underworld, where, in time, they are sure to be devoured by the unnatural denizens that dwell forever within that dark place. No magic known to Gods or mortal man can return them from that place. In this regard, once dead, an elf is indeed truly damned.
Yet it is whispered among these scattered exiles, on those rare occasions when two or more may gather in one place, that salvation exists. It is said that if, by some chance, an Elf might perform some unimaginable feat that might draw the intention -and interest- of his ennui-ridden Queen, it is whispered that this terrible process can be reversed. I have heard often such whispers pass between my mother and those few Elves with she has corresponded during her long exile, that Shidhe have undergone the dreadful transformation many times. Passing from Elf to Shidhe to Elf again in accordance with the Queen's whims. My mother talked often of such a being – telling tales while I perched upon her knee, give me hope for her mortal soul. Tales of a creature she spoke of only in the most hushed and reverent of tones. Tales of the being she called the Dancer in Shadow."
-Pytheragon Half-Elf,
Pedagogue to the Royal Court, Zama

I love new twists on old races. Elves tend to stay very close to their Tolkenian "roots", but they have been expanding out of late (they're at least not as staid as Dwarves!).

The Shidhe sound pretty cool, and I can definately see the potential for some great villains out of the race (as well as more heroic PCs).