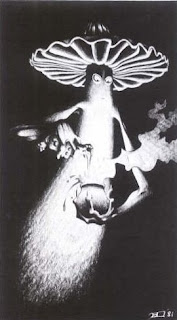 [Well, I wasn't able to run this session as a dual epic cut-scene battle after all. A variety of factors conspired to prevent myself and most of the other players from meeting up to create their back-up characters. Instead, I'll wargame the success -or otherwise- of the defending forces back at the Temple later tonight using 2nd edition AD&D Battlesystem Skirmishes. Unfortunately, most of my mini's and terrain are still packed-away following the move. I'm afraid I'll have to use paper counters instead. A pity really, as I'd love to do a battle-report on the attack, but there we go. I'll be taking notes though. If enough people are interested in such a thing I can always set up the miniatures and terrain at a later date and take the photographs then]
Anyway, we left the players just as the opened a door to come face to face with the Sinister Shroom:


Garrison at the Temple of Meerax (absent players and NPC's):
Antipater. Human (Mycenean) Male Ship's Master. NPC
Kallisto: Human (Mycenean) Female Fighter 1. Played by Jackie
Minerva: Human (Mycenean) Female High Priestess and Princess of Mesos. NPC
Peliakos: Human (Mycenean) Male Fighter 1. Played by Coakley
Sparious: HUman (Mycenean) Male Fighter 1. Spare Character.
The battle opens up with Shadowdancer (whose player was running late) fading into darkness while Boagris and Andros, each standing at the entrance of one of the two southern doors into the chamber, set to receive a charge. Ki Oman and Kallias keep an eye on the various corridors and doors behind the party. Friendly the Trog begins the actual combat by tossing all three of it's darts at the Sinister shroom, hitting with two. Kalias, out of spells, lingers at the back away from trouble.
Thanatos and Xenos, meanwhile, move into position behind the front rank fighters, ready to fight with their spears. At this point, the Shroom, still reeling from the two darts embedded in it's rubbery trunk, unleashes a nasty surprise on the party. It waves it's arms in the air as though spellcasting. Boagris, succumbing to the Shroom's spell, drops his spear and shield to the ground and blinks rapidly in confusion. Meanwhile the Shroom's unusually large podman bodyguard moves into action, advancing upon Andros who, thrown by Boagris' strange behaviour, merely knicks the creature with her set spear.
Surly advances to join Thanatos and Xenos in the second rank, wondering why the big tasty human in the front suddenly smells so off. He soon has his answer.
“Noooooooo! Don't hurt my Shroom!” Boagris, throwing his arms wide, leaps upon his fellow fighter Andros, wrestling her to the ground. The party's two front-rankers thereafter spend the remainder of the fight rolling around on the floor in a grapple, seemingly taking it turns to roll atop the other.
Friendly, Xenos, Thanatos and Surly take up the slack left by the brawling warriors, engaging the pod-man in vicious hand to hand combat. Thanatos, perhaps regretting her new found atavism, goes down hard on 0hp after taking a pummelling from the creatures fists. Ki, on the other hand, notices a door-way potentially leading into the Shroom-room from the west [I say suddenly, but what I really mean is that I had forgotten to include the damn thing in the room descriptions until Ali noticed it on the map] and hurries towards it, intending to flank the creature. Shadowdancer (whose player arrives around this time) follows. Friendly, meanwhile, is badly hurt by the Shroom's magic missiles but stays in the fight.
While the two fighters continued to play “king of the hill” on the floor, the brace of party-members fighting the pod thing finally begin to make a visible dent in it's considerable pool of hit points. Realising his body guard is about to go down, the Shroom flees -or rather, hops and slithers as fast as his slimy little stump will carry him- towards the rooms eastern exit, helped on his way by one of Surly's darts.
Ki Oman and Shadowdancer appear through the western doorway just as the pod man hops through the eastern exit. Flicking a switch, a portcullis falls behind it. The Shroom hops around to glare balefully at the two assassins following behind, who continue running towards the eastern door, hoping to find the portcullis switch.
[The Shroom chamber in my adaption of the module is considerably longer east-west that in the published version]
Just as Ki (in the lead) reaches the portcullis itself, the pod-man finally goes down and the Shroom unleashes a gobbet of black, mucousy goop. The globule strikes Ki full in the chest, sending him crashing unconscious to the floor on -2hp, the black gloop still smouldering on his chest.
Xenos runs into the room and, with Shadowdancer drags the wounded assassin/bard to one side, out of the Shroom's line of sight. Surly  and Friendly soon follow the others into the room. Seeing the imminent arrival of the two Trogs (and -correctly- suspecting that as former residents of the complex the Trogs know exactly where the portcullis switch is) the Shroom casts a web spell into the chamber, concentrated near the switch. The web catches both Trogs, Shadowdancer, Xenos, and Ki Oman. However, Shadowdancer is caught on the outskirts of the web and easily tears through the foot or so of gunky chord between himself and freedom. Xenos reveals his own, somewhat surprising, strength for the first time and also makes headway in freeing himself. Moreoever, the web provides no obstacle whatsoever to the two Trogs who, with cold reptilian strength, tear a path through the web towards the portcullis and it's switch.
Eyes glowing in alarm, the Shroom turns and hops away down a corridor to the south. It's too slow however, and is quickly caught by Surly, Friendly and Shadowdancer, joined shortly thereafter by Xenos. Even with four against one the melee is not a short one. It is Surly's spear that knocks aside the Shroom's longsword to pierce the rubbery hide, spilling black slime from it's fungal “veins”. Though this foul ichor covers the cavern floor, so too does a small amount splatter onto Surley himself. His arm dissolving in similar fashion to that of the late Glykeria, Surly calls out to Friendly to stay back.
“Tell the old one I died well.” he hisses fiercely, before running down the corridor out of sight and away from the equally susceptible Friendly.
Thanatos soon recovers consciousness and helps the others free Ki Oman from the web. Andros has, meanwhile, finally managed to restrain a weeping Boagris, though the former gladiator continues to struggle. His...ahem.. disposition is not helped when Xenos, his former owner and a slaver by profession, advances upon with some vine-rope, intent on tying him up. Eventually, unable to trust the violently struggling warrior in his present state, they manage to tie him securely. He is later released after having had a chance to calm down. 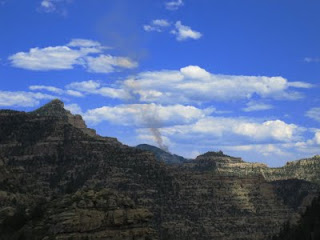 Dear DM, can we please have the Fireside Reverie write-up please? Please.....

Not tonight, but you can have Session 9 instead if you like?