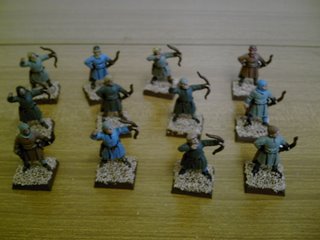 What a busy day it's been.

Today started with a little (very, very minor) disappointment. My Gripping Beast banners and LBM shield transfers still haven't arrived. But given that it's (, well, was) only Tuesday I can hardly grumble. Maybe they'll arrive tomorrow (later today that is, since its well past 1am). The day improved considerably though. I now have seven flats to view over Thursday and Friday (yah!). On the other hand, considering I have Bill's Ebberron game tomorrow night, Pirates of Penzance at the Theatre Royal Glasgow on Thursday night and my Uncle to visit on Friday, I`m not going to have much time for painting.

Together with having popped along to G3 tonight for an hour or so to arrange a game against Colins vikings next tuesday ( a double landmark: my first game of WAB AND my first game with my new army), this means I've had to rethink my painting schedule. Especially since I absolutely hate playing with unpainted miniatures. Doesnt matter if the other guys figs are all shiny lead, just as long as mine arn't. If I fall back into the habit of playing with "naked" miniatures I`ll never get anything painted.

So, now that the Archers are finished (as of about ten minutes ago: I`m still waiting for the paint on the bases to dry so that I can add the cork. Once thats done I`ll edit this post and put up the photo's) I`m going to start work on the mounted milites, rather than the liberi spearmen. Purely because I`m going to need them as a core unit and can muddle by without the Liberi if I can't finish them all in time. I reckon that if I can do four complete cavalry models (rider and horse) each day for the next three days I`ll still have time to paint the spearmen. It will be tight, and it would probably be quicker to paint the 12 axemen I have from Perry plus their command group, but I dont think 15 Serjents with handweapons are going to cut it against Colins Vikes. I`ll have to think on what to do next, after the horsemen.

Anyway, I'm glad I had the chance to challenge Colin. For one thing he has a good reputation at the club for being patient with beginners and, despite having some pretty impressive facial hair, for not being as "beardy" as far as rules are considered. He should be a good teacher - but I`m still expecting to be soudnly thrashed. His glee when he discovered I had no armoured crossbowmen painted (or even unpainted - they'll be on order at the end of the month, as soon as I get paid) was altogether unholy. Note to self: buy more crossbowman than originally planned. Tweak army list accordingly.

One extra consideration that was brought to light by my quick visit came about from a chance conversation with Spence. Spence, the guru of "keeperdom" (on the grounds that he needs a second house just to keep his lead in - this guy has no danger of dying from painting his last miniature any time soon) reacted with some degree of surprise when I mentioned "diluting" my Perry force with Crusader figs. Spence seems to reckon that while Perry figs do indeed go well with the occasional Gripping Beast or Foundry fig, Crusader figs are far to "chunky" by comparrison to look right in the same army, let alone having the two product lines in the same unit. Colin on the other hand, (whose question's about my new Army more or less initiated this particular conversation) feels that why they're not suitable for fielding in the same unit, they look fine as seperate units.

I truly hope so, because I think the Crusdaer figures are more than merely "very nice" and I especially want some of their archers, axemen and spearmen for my collection. I was even thinking of using Crusader or GB to supply my light cavalry unit as well, but the Perry Twins will probably edge in to another fine victory over my pocket book once again.

Anyway, back to the basing and the photo's. In case your wondering, all the figures shown were painted using Vellajo Model paints, with a few colours (the dark browns and the blue-grey) from the MP "Miniatures Paints" range. Actually, I was surprised by how quickly these were to paint ( exactly three hours for each batch of six - same as the armoured spearmen) especially since there was nothing to drybrush. In fact, I seem to spend more time waiting for the "White Stone" textured paint to dry out than I do actually painting. Just so you know, I use the white stone to blend the minaitures molded-on stands into the plastic GW bases that I`m using, so that there isnt an odd bump. Ive found that if I build up two or three layers before gluing smaller "true 25mm" figs to the base, the extra 3mm or so of height can create the illusion of scale and make the different figure lines more compatible. Provided I only sprinkle two or three throughout the unit, that is.

I would try this with the Crusader miniatures as well, but Spence tells me the issue is one of breadth rather than height. Apprantly, they are just proportionally broader than the other miniature lines Ive been using. Ah well. I`ll order a pack or two (probably one of archers and one of those quilt-wearing spearmen Ive mentioned a few times) just to try them out together. Even if they dont go well together in a unit, I still hope that (for once) Spence is wrong and I can at least use them in seperate formation. If anyone out there has any experience of combining Crusader and Perry figs, I`d love to hear from you.

Pics will be up shortly (not that anyone out there is crazy enough to be reading this right now). G'night.

Edit: Pics didnt come out right due to poor lighting. Will take the pics later this monring when the sun (and I) have both risen. Ill put up another progress report tonight (most likekly in the early hours) and report on the Ebberron game.
Posted by Dangerous Brian at 01:28

Thanks for the flattery. Way to disarm your opponent.

You can see Crusader figs in Static if you want to compare, jsut take your other figs in. I have mainly Artizan figs and my few GB figs don't look that out of place mixed in with them.

As far as being afraid of berserks, don't forget, I can end up losing more points than they kill with them, they are expensive swines.

Remember that your Coloni are skirmishers. If they are broken your formed units don't care (pg 56 of the 1st ed rule book). As far as I can tell the same happens to your Liberi if they take the Light Infantry option and are formed as skirmishers.

Thats another good peace of advice. Thanks Colin. Also, thanks for clarifying that issue regarding the skirmishers. Dont worry: I`ll have the rules well and truly memorised by Tuesday.