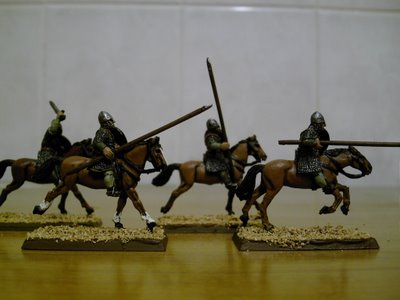 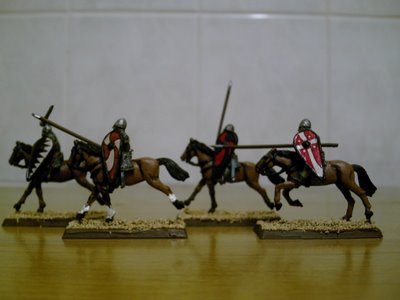 No, it's not a re-run of Richard Gere's worst movie (thats not saying much, really), it's the first batch of mounted milites.
Today was vaguely productive, even with the return of the old dears from their hols` (naturally, they wanted to tell me about it and naturally I was interested enough to listen). I managed to complete my first set of four mounted milites. Special thanks to the folks over on the Warhammer Ancient Battles List for pointing me in the right direction (i.e towards a web-article on painting horses).
It's hard to believe, but in fifteen years of painting (well, 19, but the first four years don't count because I thought undercoats were an item of clothing until I was about 12) these four beasts constitute my sixth, seventh, eighth and ninth horses! Yes, fifteen years and I've only ever painted NINE horses! I know, I know. I`m not the only gamer with a near-phobia of painting the damn things, but how I manged to go so long avoiding the job I'll never know.
Well, yeah, I do kinda. It comes from all those science-fiction and late medieval-style armies I've collected and 9rarely) painted. Barely a horse in sight in those and the ones you do see are covered head-to-foot in War of the Roses style barding anyway.
I've very fond of these four. My efforts may not have produced spectacular miniatures but I am painting for gaming purposes here and not for display. The really surprising thing I that I quite enjoyed painting them! I dont know why this was ever such a bugbear for me!
Well, no doubt you guy's will let me know what you think. I have five more on the table at the moment and when I finish those (hopefully early tomorrow) that will leave me all afternoon to sort out the command group, arrange an army list for Tuesday and prep the Libre spearmen for basing and painting.
It'll also give me time to do a little repair work on two spearmen I accidently spray painted rather than varnishing. Yup, I managed to have a good stab at re-undercoating two of the newly shielded spearmen you saw earlier instead of varnishing them. It'll take all of five minutes to cover up the minimal damage ( I realisedsomething was up right after the first sqoosh) but the worst thing is, they weren`t even in the FIRST batch of spearmen to be varnished. Oh no, they were the very LAST TWO!!!!.
Note to Self: Never Spray Varnish after midnight. Especially when your Spray Varnish and your Spray Undercoat have the same colour of lid. Bad, bad idea. Even for me.
Thought for the Week: "Your only goal in playing a wargame should be to make sure your opponent has a good time." - Jervis Johnson, quote courtesay of the WAB list.
Damn straight!
Posted by Dangerous Brian at 00:55