The Ruin at the End of the World 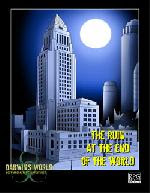 Ordinarily I would be prepared and willing to create a sandbox for my new setting from scratch. However, as I'm already running two regular campaigns (the Pendragon campaign and the Expeditionary Campaign) and a one-off game, that looks set to become a full campaign as well. That doesn't leave me with a great deal of time on my hands. Fortunately, there are a number of excellent Post Apocalyptic sandboxes already available out there. So I'm going to mess-around with one of the better (and in my opinion, the very best) pre-made post-apoc sandboxes out there: Darwin's World's “Ruin at the End of the World.”
Coming in at nearly 300 pages, the book evocatively details a post-apocalyptic Los Angeles with more than 200 wonderfully detailed encounter sites. The ruins as presented don't quite fit neatly into my imagined campaign setting however, so the sand-box needs some work to make it compatible with my campaign. Here's a brief list of the setting elements that don't really pan out for me: 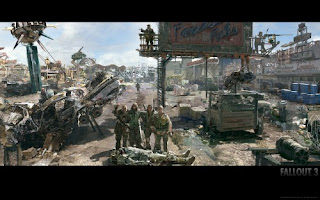 As you can see, the three elements don't quite fit with my “vision” of the setting are easy-fixes. On the other hand, the list of things I like about this setting are well, extensive, to say the least: 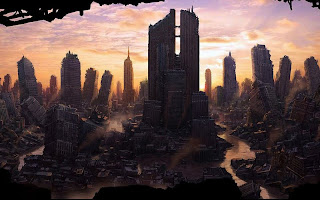 Any future campaign played-out in the L.A Ruins of the Post-Rapture world would likely begin either inside, or just outside, the city. My present leaning is towards starting just outside L.A, on a hill overlooking the ruins of the city. That way, the first image of the campaign world the players will ever get to see is an astonishing vista of the entre city, laid out before them in utter abject ruin.
"Noooooooo. I slept too long."
Yeah Ash, you and the other PC's both.
Posted by Dangerous Brian at 16:18

"My present leaning is towards starting just outside L.A, on a hill overlooking the ruins of the city."

Could it be anywhere other than from the Hollywood Sign? ;)

And it really is an amazing supplement. I'm frankly amazed that it hasn't received more recognition for the sheer quality of the setting.

Non-gonzo post-apocalypse is strangely under the radar as a P&P RPG genre, it seems. Not sure why that is. Too grim for general tastes, maybe?

At any rate, here's a couple shots from behind the Hollywood sign. That cluster of skyscrapers in the distance is Downtown L.A. proper.

Larks, you are a star. It shouldn;t be too hard at all to Post-Apoc them in Photoshop. Cheers very much.

Darwin's World has some great adventures/material, it definately deserves more love! I will definately be following your posts on this!

Thanks Bill. I'm not sure how many more posts I will devoting to this setting (at least not until I have a chance to play it) but I'll finish up the basics at least.

So if I'm understanding you correctly there is a "more" PA version of the Cascade Failure rules coming out?

Greg's working on a set of Post Apocalypse rules. He hasn't said much about them. I'm assuming that they're PA. But I could be absolutely totally wrong.

Sorry, assuming they'll be Cascade failure based. But I could be wrong.