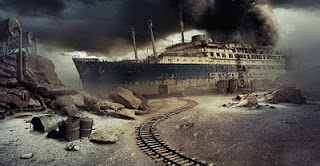 As you can see from even a brief perusal of the previous post, the term "post-apocalyptic" covers a lot of ground. Therefore, before you begin designing your campaign world, it's helpful to stop for a moment and ponder what exactly it is you mean to include. And what you intend to leave out.  In essence, you need to ask yourself the following questions:

Right about now most of you are probably wondering, why the hell would I leave choosing the rules till last? Well, you can always tailor your sandbox to your favourite rule-system if you wish and then crowbar in house rules that would allow you to include zombies, demons and psionic powers into a game of Aftermath, for example. I prefer to create the setting I want and then pick the rule-set that would handle that setting best. To me, it's a more elegant solution than having to bolt on endless house rules. Your players will probably thank you for it.
Here's how I used these questions to establish my own post-apocalyptic setting:
Step One: Real Earth or Not-Earth?
Having looked over the options and thought about my source material,  I've decided to stick with the real world for now. However, rather than having my "Event" occur in the modern day, I'll set the "Event" 200 years in the future. This will allow me to have lots of hi-tech gee-gaws and gadgets ala Gamma World scattered around the environment. It also raises the possibility of human civilisation having spread to the stars (or at least, elsewhere in the solar system) before the "Event".

Step Two: Defining the "Event".
Taking a page from the likes of Stephen King's 'The Stand", the movie "Legion" and RPG's such as "The End", I've decided that my worlds trigger event was nothing less than the "Rapture". Or at least, that's what the survivors decided to call it. However, I also like the idea of nuclear annhilation, supernatural monsters and "fast zombies" so I'm going to work these elements into the tale as well.
On one single day in 2222 untold millions of human beings simply vanished into thin air, leaving their empty clothes and personal effects behind them. Though confusion reigned, it took only a matter of hours for police and investigative reporters around the world to piece together some startling information: though those they dubbed the "Taken" had belonged to all manner of cultural and religious groups, each had been a devout practitioner of their own religious beliefs. In essence, the faithful had been taken away by a higher power. Those that remained behind were quickly dubbed the "meek" (those who professed to possess a religious afiliation but who were lackadaisical in their adherance to it's teachings at best) and the "faithless" (those who either belonged to no religion at all or who claimed to be devout but were instead somewhat hypocritical, rather than merely lax, in their beliefs).
Shortly after this first revelation reports of the dead rising from their graves and attacks by supernatural, monstrous creatures straight out of Hell itself were wired, emailed and streamed all across the world. In desperation, nuclear powers launched missile after missile at their own and foreign populations in an attempt to stem the tide of evil. Strange and wicked plagues scoured the land, unleashing slow and painful deaths upon the multitide and driving the enraged survivors mad with angry, cannibalistic fury. Those who remained immune to the infections, or who managed to avoid exposure, destroyed themselves in an orgy of violent competition for food and resources. The word, as it's inhabitants had known it, ceased to exist.
Step 3: Pre-Event Tech-Base 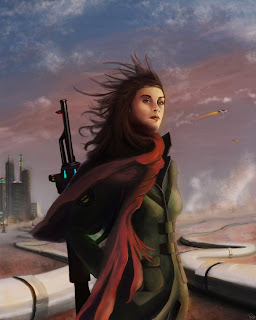 I've already established that the Event happened 200 years in our future. So we'll say that there are an awful lot of old scientific gee-gaw's lying around just waiting to be discovered and repaired by enterprising types. These will include laser guns, robots, androids, A.I's, power armour, grav vehicles, inter-system space-craft and so on.
Step 4: How Long Ago?
The answer to this question will determine just how far civilisation has sunk (at one extreme) and how far it might have recovered (at the other). Most of my favourite post-apocalypse games seem to be set anywhere from eighty to two hundred years after the Event. I think in this case we'll go with eighty. Long enough for third and even fourth generation survivors to be running around (possibly with mutations) but not so long that old skills (such as the ability to make or repair firearms, some basic understanding of science, mechanics, telecommunications etc) have died out completely. There could conceivably still be survivors of the actual Rapture Event running (well, most likely lying or sitting) about the place. Either as the recipients of life-extending medical treatments or as revered elders who were only children at the time of the Rapture.
Step 5: Recovery/Current Tech Levels
Although sources such as the Postman, Eli and the Mad Max Films were all set either during or soon after the breakdown of society, I've always rather liked their feel. So we'll say that the majority of survivors have retained some level of “savage” (i.e modern day) technology. Lucky settlements have access to water purifiers, electricity, radios, a few working vehicles and the like. Warrior and soldier types are likely to possess a few treasured firearms and laser weapons but most normal folk make do with melee weapons and improvised or poor-quality firearms and block-powder weapons. A few lucky towns have specialist craftsmen with the skill, talent and resources to manufacture automatic weapons and cordite-based ammunition. This level of technology is merely the base-line. Extremes exist in either direction. Essentially, this world will have a lot in common with the Fallout series, with the major (and important) exception that it will lack Fallout's 1950's aesthetic.
Step 6: Who (or What) Survives?
Despite all the odds, millions of stubborn, tough and well-prepared (or even just lucky) human beings survived the radiation, the war, the disease and predation by ghouls and demonic beings to pass on their genes to a new generation. Unfortunately, so did many of the ghouls and demons. Moreover, those humans who did survive did not (for the most part) survive without at least some damage at the genetic level due to radiation. At first this damage resulted only in some minor deformities among children borne by survivors, most often leading to the death of the child concerned. Yet some mutated traits were advantageous and these were usually passed on to children of the second and subsequent generations, becoming more pronounced and dominant each time. Of course, the radioative and (perhaps supernatural) elements in the environment continued to affect each subsequent generation as well. Now many survivors bear obvious (but relatively minor) phenotypical mutations of one kind or another. These minor physical mutations usually grant some small advantages such as improved vision, thicker, radiation resistant skin and the like. Extreme mutations (such as functional, non-vestigial extra arms or tails, for example) are incredibly rare. At least in humans and other animals. Creatures with faster generational cycles (such as plants and most insects) have undergone some more extreme mutations since the Rapture. Most mutations however, pose a distinct disadvantage with regards to survival, though as radiation levels decrease and the generations pass disadvantageous mutations are becoming distinctly less frequent (but are still common). Some few individuals have even begun to develop minor mental powers such as telekinesis or telepathy.
In other words, unlike in settings such as Gamma World, Mutant Future and Darwin's World, obvious mutants (or obvious mutant humans, at least) remain the exception rather than the norm. In the current time frame anyway.
Threats to the survivors and PCs include: raider groups (human and mutant), ghouls (humans and mutant fast-zombies affected by the Ravvies virus), rogue robots, ancient military bases, multiple factions, mutated plant and animal life, secret societies and, scariest of all, supernatural threats such as demons.
Step 7: Where do the PC's Come In?
Unbeknownst to the rest of the world, two large factions of humans survive in relative safety: the Vault Dwellers (taken straight from games such as Fallout, Exodus and Darwin's World)  have lived for generations underground in relative ignorance of the terrors and depredations above. A second group, often referred to as “Popsicles” (by those few outsiders who know of them) also exist in remote, secret locations around the globe. These men and women are pre-Event humans who volunteered to be stored in cryogenic suspension in the event of cataclysmic emergency (though no-one could have predicted the form that the apocalypse actually took). These brave men and women  of the Morrow Project (yes, ripped off directly from the RPG of the same name) were supposed to awaken a mere decade after the Event in order to assist in rebuilding. Alas, Prime Base was destroyed mere months after the event and no recall signal was sent. Now, eighty years after the Rapture, the power-systems for the cryogenic storage tanks are running dry. Morrow Project teams all over the world are finally coming to life, face-to-face with the Herculean task before them: survive, re-educate, re-build. 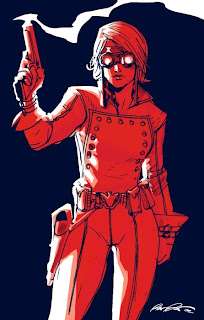 It's my intention for the first group of PC's to come from either the Vault Dwellers or the Morrow Project. This will let me flesh out the sandbox bit by bit as the party explores their environment rather than having to create the whole sandbox before-hand. Later replacement PC's (or even whole parties) can come from anywhere in the sandbox that PC's have already explored. Restricting the first party to outsiders from a Vault or the Morrow Project gives the party a good reason to stay together. At the same time, it also explains the character's (and player's) general ignorance  of the setting.
I will add there is also a third and (at least) a fourth group of human individuals out there whose ancestors never experienced the torments of the Rapture. I'd say more, of course, but I intend to run this sand-box one day and can't risk spoiling the surprise for ym players.
Step Eight: Choose your Weapon (er, rules. I meant rules).
This is such an important step that I want to devote an entire post to it. The next post, will cover the available rules in my collection with some detail, looking at the strengths and weakness' of each in relation to the setting.
Posted by Dangerous Brian at 19:49

Blimey that's sounds like you've put a hell of a lot of thought into thgis design, and I've gotta say it sounds very good, can't wait for more!

Excellent post and has certainly given me some food for thought. It came at the right time too, as I'm in the process of imagineering a PA scenario of my own.

Sounds like a really rough place.
--Should be great fun for the players. :)

You do a great job of defining the tech level pre- and post-apocalypse. I had a hard time deciding for GWW. I wanted it more advanced--but not TOO advanced so that the aliens had the upper hand. I'd say it's about the same level or so as what you have (kinda the same as what's in the original GW) though I haven't gotten so far as to outline specifics.

Thanks guys. Glad your enjoying it and also glad to help. Let us know how you get on with your scenario Arlequin. I'm keen to see what you come up with.

I have no idea when I'll finally have a chance to game it, but I'm always enthusiastic about a chance to do some world building.

I always kinda liked the tech level in Gamma World -the high end anyway. I wasn't all that keen on how far tech levels had regressed at the lower end of things. But it's a wonderful setting that I ingored for far too long when I first started out.

I hadn't even realised you were doing Gamma World War until you mentioned it, Jay, but I'm following it now.