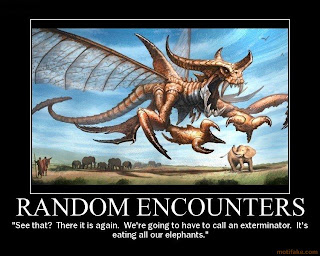 One of the things I enjoy most about building a sandbox is created  keyed location encounters and wandering monster tables. One of the things that proves how obsessively anal I am as GM is the fact that these are all updated regularly to take into account campaign events, like not encountering a camp of guys from faction A at hex XXYY if the guys from A are all under siege back at hex AABB. The second thing that proves my status (and oddly the most time-consuming) is the fact that every single possible random encounter is also linked in some manner to a keyed location encounter . Those wondering monsters have to live somewhere right?

Lions, wolves, bears, orcs, giant-elephant eating flying lizards, whatever. If it can pose a threat to a PC and appears on my random encounter tables then that very same individual creature also appears in a keyed-location encounter somewhere (and vice versa). So if one or more wandering monsters creatures are killed or wounded in an encounter, I immediately update the keyed encounter to reflect these changes (sometimes mid-session while the PC's are planning their next move, most often right after the session. Likewise, if a monster is killed in its keyed location, then I quickly update the information on the random encounter table as well.

This is every bit as true for my dungeons denizens as it is for wilderness inhabitants.

I often wonder if my players even notice that the more they clear-out an area the less wandering monsters they encounter (because so many of the wandering monster rolls now come up with creatures who have already been killed elsewhere). I've seen the occasional Eureka moment with my players now and then, mind you. Like the time my players cleared out an orc lair and discovered a magical sword looted from a dead PC by those self-same orcs in an earlier encounter thirty miles away. But did my players simply think this was just a cool way to re-introduce an old magical item to the game? Or did they actually realise they only got the sword back because they happened to track down this particular band of orcs?

Does anyone else link their keyed encounters and wandering monsters this way? Or am I simply an obsessive freak? The reason I'm asking is that I'm currently creating hex-linked and random encounters for the Expeditionary Campaigns wilderness map, the Isle of the Earth-Shaker. Much as I'm joining the process, I can't help but think I could get this whole campaign up and running a lot sooner if I wasn't so damnably anal-retentive. Is the extra-effort worth the pay-off if the players don't even notice?
Posted by Dangerous Brian at 00:11

I admire your dedication to reasonable wandering monster encounters. I played with a guy who just threw random shit at us for hours every session.

Of course it is, your reputation for evil GM is legendary and the effort is worth it, makes the game better even if they don't appreciate it.

Thanks guys. You've not only answered my question, but you've managed to get me all keyed up and ready to write more encounters.
Four hours till I leave for work?
Plenty of time.

I will do updates to random encounter tables, but mostly just to replace encounters that have already played out. I find it both easier and more fun to figure out the logic of an encounter on the fly once it actually comes up. Until it actually occurs, there is nothing more to it than "2d6 frog men hopped up on elven absinthe" or "old lady unconscious on the side of the road".

Don't get me wrong, world building with lots of detail can be very fun, but in my experience it is mostly wasted effort.

I think stuff like this adds a lot to the gaming experience.