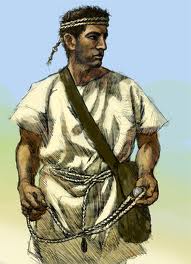 The people of the Balaerian Isles have retained their independence and cultural identity for centuries.
Largely because no one else wants what little they have.
In the distant past , these islands were invaded numerous times by a succession of different peoples. This period of invasion changed the face of the Balaerian Isles forever. When the conqueror’s attempted to interbreed with the small, lithe native woman they found that many died in childbirth or could not carry such large babies to term. Very quickly the conquerors found themselves with a population crisis and began to hire out as mercenaries, taking their payment in young nubile slave girls of all races.
To this day, the talented slingers of the volcanic Balaerian Isles undergo their rite of manhood by hiring themselves out as mercenaries to “earn” their first wife and become a man. Over the years, the men of the Baelric Isles have mated with woman of so many races that they themselves have no distinctive racial appearance of their own.
Any given Islander might appear to be a Pheonixian, a Khemite or an Mycenian. Some will even have the racial features of more than one ethnic group –making them ideal as spies and assassins and earning the entire culture a sinister reputation. Their men are famous for proving their bravery through “stealing” the virtue of other men’s wives – climbing through bedroom windows in the middle of the night to seduce them or carry them away to their rocky fastness.

Regions: Although many Balaerian Islanders serve in the fleets of the Pirate Isles or as mercenaries in the employ of the Zaman Protectorate, no man who does not call the Balaerian Isles his birthplace may consider  himself a man of the Isles (although it is difficult to imagine why anyone else would want to).
Religions: Given the eclectic nature of the Balerian ethnic make-up, the Islander’s worship just about every God or demon known to the peoples of the Middle Sea, regardless of pantheon. It is not unfair to say that the lack of technological or cultural progress on the islands is due to the fact that the Islanders seem to celebrate a religious festival every other day. They therefore achieve very little in comparison to men of similar talent from other lands.
Notes: As you can probably tell from the sparseness of this post, the Balaerians haven't featured much in previous editions of Edarnia and have probably undergone the least changes over the years of any human cultural group. Generally speaking, they turn up only as bands of mercenaries, brigands or opponents in tavern brawls. Given their distinctly unpleasant cultural idiosyncrasies, I don't think it's surprising that I've never actually seen a Balaerian PC.

Edit:
Additional Development Notes (added after comment 3): The original premise behind the Balearians was that I needed them to fill an empty gaming niche in the campaign. In the earliest days, Zama was a human-only game world. There were no orcs, goblins or the like. So I created the Balaerians: a thoroughly evil and unpleasant human culture the PC's would have no qualms about killing on sight. Making them mercenaries meant I could place them anywhere in the game world. Making their home an archipelago meant that I didn't have to alter the world too much to fit them into it.
Posted by Dangerous Brian at 07:36

I concur but good background info.

Thanks Lurk. In the earliest days of Zama there were no orcs, goblins or the like for PC's to simply cut loose against knowing they were bad guys, so this is where the Balaerians came in.

yes, thanks for the background on this.