July was a fairly good painting month, at least to start with. My painting efforts tailed off towards the end however. In the last half of the month, I painted exactly zero figures. So while I'm ahead of the miniature-a-day target over all, I could have done a lot better. Especially considering that most of these mini's are 15mm and a lot less time consuming to paint.

First up we have a number of hoplites and amazons painted for the upcoming Isle of the Eathshaker Expeditionary campaign I'll be running. The fabric on these guys (and I do mean guys, the girls are hardly wearing a thing) has been painted in my traditional "mook" blue. That is, the dark blue colour I paint most of my RPG minion types in. Clearly, that means none of these hoplites will represent PC's (I have the Foundry Jason and the Argonauts figures for PCs) but one or two amazons might wind up with better, non-mook paint-jobs depending on how character generation goes.

Next up we have some 15mm Critical Mass aliens painted up and re-modelled with milli-put for my Mass Effect theme science fiction gaming. These guys already appeared (in a different photo) on my Terminus Omega blog last month. So that'll explain any sense of de ja vu you might be experiencing.

I love these rats. Otherworld miniatures produce some great sculpts but these little guys are my favorites, hands-down. In fact, I'd go as far as saying that they are some of my favorite sculpts from any range. And very simple (and quick) to paint too. 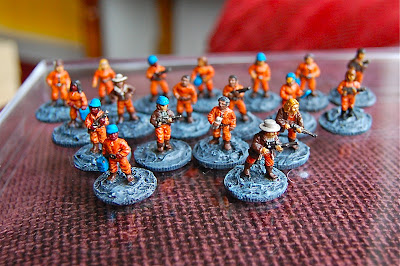 Finally, here's the first of two shots showing my 15mm science fiction gaming colonists from Ground Zero games. I bought eight packs of various sci-fi civilians, techs and security guards from GZG last month. They come eight miniatures to a pack, with 2 each of 4 poses. So half are being painted up as Corporate clones (19 done so far, 13 left to go) while the other half will be painted up as normal, non-corporate types.

And here's the corporate wage-slaves again from a second angle.

In case you're wondering why I need so many civilians in overalls, well, the answer is simple. I'm building a 15mm "moon-scape" scenery set right now. One of the major terrain features (it'll take up roughly a 4ft x 4ft area all by itself when completed) is a generic production plant/power station facility. The guys in orange get to be the staff on duty. The other civvies get to the off-duty inhabitants of the "company town" I'll be building to take up the rest of the table. There will be a post on my Terminus Omega blog with more details on this terrain building project soon.

Posted by Dangerous Brian at 20:07

Thanks guys. Critical Mass are a great company. The detail they achieve on those little 15mm figures is staggering.