For the benefit of myself and my players, here is a brief list of the notable NPC's from the Earthshaker Isles shipwreck. I say notable, because all the other NPC's present represent the replacement character pool and will stay unnamed and nebulous until needed to replace a dead PC. 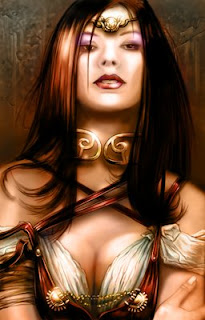 Minerva: Priestess of Hestia and eldest daughter of the King of Mysos, Minerva is a passenger aboard the Persephone, the leader of a trade embessy en route to Zama and (some whisper) potentially an arranged marriage with Prince Hamilcar Zarka, Archon-Prince and Champion of Zama. Minerva is short in stature and dark haired, with a winsome smile that does little to hide the great intelligence and fine humour glittering in her eyes.

Minerva has spent the vast majority of the journey surrounded by bodyguards, either at the Prow of the ship, where she has studied the motion of the waves with great interest, or taking leisure in her tent erected beneath the mast.

(Note: In this setting being a priestess does not automatically make one a cleric. A priestess is just as likely to be a 0 level character or even belong to another class altogether). 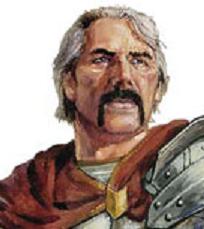 Antipater: Grizzled capatain and ships master of the Persephone, only the great respect in which he is held by his crew has prevented his lynching following the mysterious, clearly god-driven storm that has driven the Persephone onto the rocks of this mysterious island. Indeed, were it not for his firm and steady hand at the rudder, likely no-one would have survived the wreck. Instead, only a few sailors were lost, swept overboard by waves or crushed by snapping oars. Nevertheless, Antipater took a hefty blow to the head when the ship crashed upon the rocky beech and has yet to regain his wits.

Posted by Dangerous Brian at 12:33