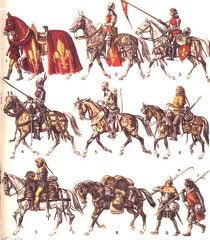 One of the more interesting aspects of character generation in Pendragon is that, as well as your main character, the rules call for determining just how large an "army" the character can call on in time of need. The main part of this army includes other knights belonging to the same family, but not necessarily subordinate to your PC. These knights are divided up by age category and include such things as uncles, cousins, older (bastard) brothers and younger brothers. Then you have a category for other non-knight family males and, finally, a levy category.

This is all well and good, but where are the yeoman who provide military service to the knight in lieu of rent? Or, for that matter, the men-at-arms permanently employed to protect the manor while the knight is away? To fill the niche, I've replaced the "non-knight" category with Yeomen, (who fight as infantry for simplicities sake) and the "young knights" category with "men-at-arms"- family members who have not been knighted, but who are equipped as knights and serve the knight as his permanent force of arms.

Of course, normally these forces would left at home when the knight leaves to go on quests. Should a muster be called, I will rule that either the Yeomen or Men-at-Arms can be left at home. However, bearing in mind that the common-born soldiers who accompany knights to battle are organized into separate companies from the knights themselves, it is unlikely a PC knight would be able to command his own men in battle. Of course, should his lands be raided during the Winter Phase for example, well, that's a different matter. Should that happen, the knight, his men-at-arms and yeomen (and if things were really desperate, his levy) would form into a single unit (or at most two: foot and horse) for purposes of playing out the battle.
Posted by Dangerous Brian at 14:32

Sounds good. It's been a long time since I used the random generators for characters. What edition of Pendragon are you playing Brian?

We're using fifth ed, but I'm planning on using some elements from older editions as well, such as the feasting rules (if I can just remember which of the pre-5th ed books I can find them in) and the Manor management rules.

Never played Pendragon but it does sound interesting for backgrounds, similar sort of thing from the old C&S, but with a bit less hassle.

Feasting rules are in Tales of Mystic Tournaments. I'm actually using a system based on posts made over on the Pendragon Round Table message board - I'll be posting about it shortly.

The Book of the Manor isn't available commercially at the moment, but in the mean time there are bootleg PDFs floating around on the net, if you're so inclined. Highly recommended; there are costs for hiring troops and so forth contained within.

This is a timely post, actually. In the campaign I'm playing in I'm planning on leading some raids into Clarence in the next game year or so; it'll be useful to be able to call upon some cousins to help me kick the hated Duke's ass. ;)

@Hendrid I'm tryint to think back but (maybe just because it's so late) I can't remember the character generation methods for C&S for the life of me. But the Pendragon version we used is very story-based. It doesn't have a huge effect on the final character, except for Passions and Glory Points, but it's still damn good fun nonetheless.

@ sirlarkins I'm sure I saw the feasting rules in one of the older books in my colection as well, but damned if I can find. It's an annoyance, but merely a niggling one at the moment. I'll tack em down eventually though.