In honour of our little darling Lyla and my wife's interpretation of her (and with tongue firmly in-cheek) I present to you: the Vampire Ferret, a new monster for OSRIC. 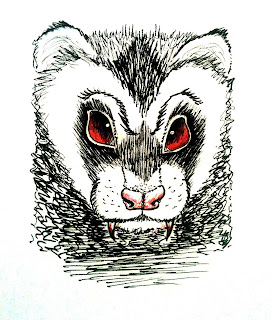 Frequency: Unique, Number Encountered: 1 or 1 + Were-Ferret Size: tiny, Move: 40ft, Armour Class: 3, Hit Dice: 3+1, Attacks: 3, Damage: 1D3+ 1D4 Con drain (bite) 1d2 X2 (claws)  Special Attacks: Sneak Attack: +1d6, climb 100%, hide in shadows 85%, move silently 85%, squeeze into the tiniest places 100% , Tasha's Uncontrollable Hideous Laughter (see below) Special Defences: Immune to non-magical weapons and shouts of dismay. Too cute to kill (opponents must save vs spell or else suffer a -5 to all attack rolls) Magic Resistance: standard, Lair Probability: 50%, Intelligence: Semi, Alignment: Chaotic Neutral, Level/XP: 3/105+3/hp.
Treasure (Lair Only): 1d8 x 1000cp (50%), 1d6 x 1000 sp (25%), 1d3 x 1000 gp (25%), 1d8 gems (30%), 1d4 jewellery (20%), 1 sword, armour or misc weapon (20%).
Tactics: The devilish and innocent-seeming vampire ferret is guaranteed to strike always when least expected, normally from hiding: under rugs, blankets, cushions or underneath sofa's are the preferred hiding spots. When a suitable target is spotted, the vampire ferret leaps from hiding, preferably onto the head of the unsuspecting prey and bites down deep. If it scores a wound, it proceeds to suck 1D4 Con points of blood from the victim each round. After the first successful bite attack, the character so affected must save vs spell or else be affected as per Tasha's Uncontrollable Hideous Laughter, as the cunning vampire ferret tickles it's helpless play mercilessly with it's raspy tongue.
Special Weaknesses: The Vampire Ferret can normally be rendered docile simply by refilling it's food bowl or placing fresh, cold water in it's drinking bottle. Dangling a tasty looking treat or a soft toy from a piece of string tied to a stick is also said to alleviate it's bestial fury.
Posted by Dangerous Brian at 22:01

LOL That is simply awesome.

That's great! What about a vampire cat?

I like it, especially the bit about its food bowl and water dish!

Thanks guys. Alas, I have deathly allergy to cats, though I'm quite fond of them, and have no vampire kitty of my own to write up.
I do have a were-ferret however, and her write-up shall follow just as soon as the missus finishes her picture.