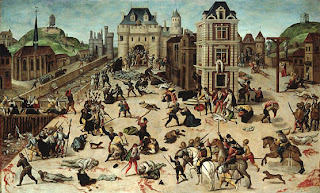 Well, they didn't make it out of the dungeon, so it's out with the old campaign and in with the new. The guys have asked me to run a zombie-based one-off for them, and since none of my players are particularly interested in having to read any rulebooks, I'll be adapting Greg Christopher's Cascade Failure rules [link]. This has the advantage of using a rule-set similar to one they already know, and lets me try out a new system I've been wanting to play-test for a while.

One of the things that first struck me about this system when I first reviewed it [link] just over a month ago was how flexible it could be. So I don't imagine converting the rules to a modern setting should be too much trouble.

So in just over a weeks time (come the end of my night shift) or possibly longer depending on how much background I have to do (and the fact I need to read the rulebook again) we'll be enjoying some good old fashioned zombie mayhem on a Caribbean cruise.

In other news I met my painted miniatures quota for the month (pics to follow) though my goal of painting up the colonial marine platoon I've been collecting for tomorrows war was subverted by the need to paint more miniatures for fantasy gaming. I only managed four marines, but I take consolation in the thought that my army of evil gribblins has been expanded with the addition of four kobolds, six hobgoblins and ten skeletons. Add in the random collection of misc. figures and I painted 31 altogether in the month of may.

Pictures will follow just as soon as my dearly beloved gets her camera out for the lads.
Posted by Dangerous Brian at 23:06

Sounds an interesting set of rules.

Did they die screaming down there?

Love a bit of zombie, looking forward to that.

Zombies on a cruise ship !! now that sounds like good fun, looking forward to that report.

Hi guys, yeah it should be a good game. I'm really looking forward to it. We spent the tail end of last night coming up with characters. I'll probably post them up later on today.

@Christian: Wi ouldn't really say screaming as such. One of them was knocked unconscious and ragged down to a watery death by a crabman. Another character cracked up (excellent roleplaying by that player by the way) when they were down to two conscious PC's, no food, no water and no way out. So that probably counts as screaming.

Still, it was all a learning experience for my still relatively new players. They're all looking forward to seeing how long they can survive on the cruise-ship.

In true zombie-movie fashion, none of them are expecting to get off that ship alive.

Dragged down to a watery death? Those damn crabmen have no respect for water safety rules.

Lol. Yeah. I guess you could say he died with a "plop" rather than a scream.

Oh... the player is so gonna make me pay for that if he reads this.

Cool! Sorry for the delayed notice of this post, I have been on vacation :)