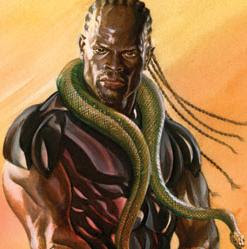 The tribes of the interior desert and savannas, have occupied their lands since before the beginning of recorded history.
What is known of their culture begins in the Age of Gods, when the animistic interior tribes of a nation known as Great Kush waged a mighty war with the upstart Khemet nation to the south. Although a far older civilisation than that of the Khemites, antiquity had bred apathy and corruption in the Kushan bureaucracy.
Thus, the mighty armies of Kush fell to the Khemites. With their sophisticated chariot’s, their skilled bowmen and their scientific approach to warfare, the Khemite’s won their wars remarkably speedily. The peoples of Kush were taken back to Khemet into slavery, where their descendants would eventually mix with their conquerors to produce the Khemet race of today.
The Kushan's ancient and nameless Serpent God, described as a creature of great and ultimate evil by the Khemites, was cast down by the Khemite Pharoahs and imprisoned by Khemite Gods. While even they could not utterly destroy one so ancient and powerful as the Serpent God, it is believed that the Great Devourer, He-Who-Must-Not-Be-Wakened, sleeps to this day, imprisoned beneath the statue of the mighty Sphinx.
The surviving Kushites formed small bands who lived as desert nomads and raiders. While deep in the interior, in the regions of grassy savannas, the tribesmen of the two main nations, Numidia and Nubia, have developed cities of their own the rest of the world continues to believe them a savage and unsophisticated people. Few ever seek to question how a supposedly nomadic people can simply stumble across so many valuable gems and other precious minerals for trade. Most simply assume that other, more settled people’s, exist beyond the lands of the nomads. 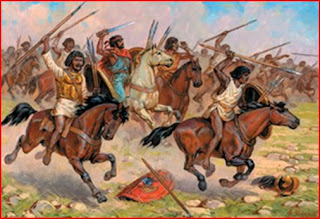 The light horseman of these tribes are in fact merely the hereditary outriders and border guards of these new cities. The Princes of these tribes are, in reality, subject rulers of the Kings of the Cities charged with the defence of their homes. They sacrifice themselves to a life of desert wandering and mercenary service in foreign armies in order to protect the secrets of their civilisation. The desert is not nearly so wide as many believe, the interior tribesmen claim far more explorers than the searing desert sands ever do.
Within the cities themselves, the King rules supreme, advised by his cluster of Priests of the Nameless one, all seeking to one day bring about the return of their God. Thus the population remains small, as the Priests have determined that the swiftest way to bring about their masters return is through massive torture and human sacrifice. Thus these small, blood-soaked kingdoms are places of despair and misery. There is a deep, dark secret in the desert. In these cities, every man and every woman is a slave to the King.

Meanwhile, these noble warriors conduct their duties honourably, unaware of the travesties they die to protect.
The honour bound and oft hospitable nomads of the desert live in ignorance of these ugly truths for the most part, the great secret of their task being known to only a few powerful families and the Princes of the desert tribes. They and their people are forbidden from entering the savannah lands in which these cities lie hidden, on pain of incomparible suffering and, ultimately, a slow death. Thus, many of these tribesmen have taken to worshipping the gods of their neighbours, especially in tribes where the ruling family has at some point become extinct (taking knowledge of the tribes secret prupose with it). Thus, it is common to find foreign deities such as the Arbaalic Pantheon worshipped by the Numidian tribes around Zama or the Khemite pantheon worshipped by Nubian tribes close to Khemet. 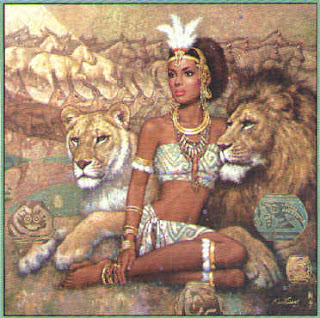 The men of the interior tribes tend to be tall and thin due to their active lifestyles and diet. The skin of the Numidians tends to be a mahogany brown while the Nubians are much darker, almost blue-black in their colouration. In their desert homeland, few bother with clothing at all, save for protections in rain storms, instead wearing loincloths due to the great heat. Women tend to go topless, also for reasons of comfort. All however, wear robes to keep out the sand when travelling the desert rather than sheltering in their oasis tent-settlements. When they must deal with others, the Princes of these tribes deck themselves in fine, thin robes that leave much of the flesh uncovered and able to breath, while catering to the sensitivities of other cultures. Traditionally, princes wear robes of green trimmed with gold, as do their families.
The hospitality of the desert dwellers is legendary and well earned. While under their tents one is safe. However, should one express an interest in travelling further into the interior, these same hosts will have no compunction in hunting down and killing the would-be-trespasser after he has left the safety of their tents. 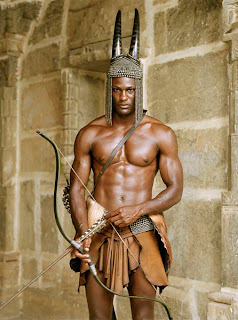 While the Numidian tribes ride and fight on horses exclusively the Nubians mix infantry -especially their renowned archers- with horse cavalry and camels. Closer to the savannas, the warriors encountered are the guards of the Priest Kings. Such men travel on foot over great distances and routinely perform feats of endurance which would be regarded almost as legendary elsewhere. Few strangers will survive an encounter with such a group however.n
Regions: While Numidians and Nubians fight in the armies of Zama and Khemet respectively, their only true homeland lies in the interior desert itself. Thus, they can be found anywhere along the Northern coast east of the Arcane Imperium, but are rarely found elsewhere in the world except as slaves or the descendants of slaves.


Religion: Numidian nomads favour the Arbaalic pantheon, while worshipping the spirits of the desert winds as well. Nubian nomads worship the Khemet Gods. The city-dwellers worship the Serpent God, whom they also refer to as the Sleeping God, but some may have taken to preying to kinder gods for deliverance in secret. Their knowledge of such distant gods is distorted however, and one might be surprised to hear Morogoth 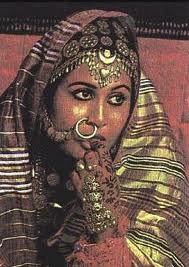 Design Notes: The Kushan's are based on the Numidian and Nubian peoples of North Africa during the classical period, but have been blended into the historical Empire of Kush, Egypts southern rival in what is now Sudan. With a healthy dose of Aztec evil thrown in for good measure
I'm aware that Numidians were ethnically Berbers rather than Africans, but I've become gradually more and more sick of RPG settings that effectively exclude some players (unintentionally, I believe) from playing characters of their own ethnicity should they wish too. Thus, I strove to include as many ethnic groups in the world of Zama and the Middle Sea as possible. Hence, the Berbers of the Numidian tribes and the Africans of the Nubian tribes are both descended from the survivors of the same ancient empire. Stick around, read more of these articles, and you'll see what I mean.
If never been happy with using the historical names for the Numidians and Nubian's however. If someone can come up with a good alternative that still evokes the right kind of sentiment and feeling, I'll probably adopt it in a heart-beat.
Posted by Dangerous Brian at 19:03