Spoiler warning for prospective players. You might not want to scroll any further down than this.

Here's the player map (without GM only icons and absent features as basic as sources of fresh drinking water) for the Isle of the Earthshaker. It's a relatively small island (1 hex to 1 mile) but there will be several mega-dungeons, a few smaller dungeons and encounter locations, a ruined city, a temple complex and an inhabited village to explore.

Of course, I don't intend feeding my players all of this information regarding terrain at once. They will have a blank hex map of their own to record this stuff. And there's a very good chance I'll have altered this map considerably before the campaign begins (hint hint). But it serves to illustrated the basic outline and shape of the island.

Made with Hexographer. If any of you have ever been to the Canary Islands or to any volcanic island in the Med, then you'll have a fairly good idea of how the terrain on the map relates to real life. Lots of sharp, rocky badland areas and mountains higher up but with good soil, streams, and plenty of forest at lower elevations, with steep slopes throughout. Can anyone tell me the name of the real island it's based on? I know for a fact some of you can. 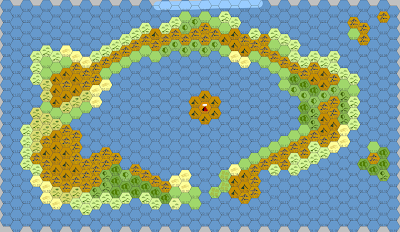 Posted by Dangerous Brian at 02:43

You are putting a ton of work int this campaign. It's really going to pay off!

I hope so. I'm adding a whole new island to the game world and expanding an existing archiepelago (how do you spell archepelgo... acheg...ah hell you know what I mean).

I'm really keyed up about this. It's going to be a great game, I know it.

This looks awesome. I wish I could be one of the lucky 24 people! :)

Kind of you to say Prof. Where do you live anyway?

South Carolina, USA. A bit far from you, I'm afraid.

Ah well. That rules out the odd day-trip then.

That'll be Santorini then, I presume :) Hopefully just as dead as well...!