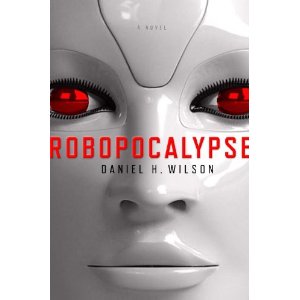 Marketed as "Visionary fiction" rather than sci-fi and with endorsements by techno-thriller writers rather than members of the sci-fi author community, Robopocalypse by Daniel H. WIlson is nonetheless as much as Sci-fi novel as the acclaimed I, Robot. In this case however, unlike the events depicted in I, Robot the film, there is no plucky hero to prevent the Robot revolution wiping out much of the human race

The novel is written in the successful "diary" or "journal" style of World War Z, told from the recollections of the point-of-view characters after the event. In this case however, the "recollections" are narratives supposedly based on events recovered from the A.I's memory after it's eventual destruction. That said, each scene unfolds as seen through the eyes of one of more human Point of View Characters. confused? Not surprising. Read it and you'll see what I mean.

Some of the aforementioned characters are extremely well thought out, the best of the bunch being an aging, shy, lonely, retired robotics engineers from Japan who becomes a very unlikely hero. Even the standard arch-types that feature in survival or disaster movies that make an appearance are sufficiently well-rounded and envisioned as to escape immediate recognition as the stereotypes they are.

However, as much as this book should appeal to any survival horror or sci-fan fans out there, it should satisfy that more "mainstream" audience that enjoys Superhero films and big budget "action" movies such as StarTrek and Battle for L.A. You know, the one's that can't bring themselve to admit to themselves that they like science fiction every bit as much as us geeks.

My one issue and complaint is that, probably from a desire to target a more mainstream reading audience, this book is too short. Way too short. 347 pages of large type just is not enough for this type of subject matter. True, the snapshots do give an accurate picture of some major events during the "New War." Yet while some parts of the story (Zero Hour, for example and the year leading up to the War) are lavished with attention others, especially the War itself, fly past way to quickly. That's the nature of snap-shot novels of course, they provide a way of telling a tale that could fill a whole book-shelf in one little book, but the narrative suffers as a result. Considerably more so than in the case of Max Brook's World War Z.

Verdict: A decent read with excellent characterisation and a very plausible plot. Not to mentioned a wealth of idea's for gamers - it's inspired a few ideas for my upcoming Cascade Failure campaign and even the one-off zombie session.  But it's just too damn short to satisfy the desires of a sci-fi/fantasy community that thrives on trilogies, quadrilogies and even quintrilogies.

Damn, are those last two even words? Who knows.
Posted by Dangerous Brian at 16:52

We know what you meant, maybe secondhand and cheap.

Talk about hitting the nail on the head Fran. I'd have saved myself two paragraphs if I'd just thought of that one sentence.