Right, as promised here are the thirty-two painted figures from last month. Some of them look unfinished (the banner bearer and one of the pyramids for example) but they're not. I need a painted and unpainted pyramid for gaming and the hobgoblins banner is blue because, well, because I'm too bloody lazy to paint heraldry freehand.

First up are ten Skeletons from Mantic Games. When I first bought these guys a year ago and opened the box, I felt gutted. They just looked awful on the sprue. Now though, with them all based up and painted, I think the miniatures actually look pretty damn good.

Some more of my LOTR Moria Orcs painted as hobgoblins.

Reaper kobolds, painted orange. What can I say, I'm a traditionalist. Kobolds are goblinoids and goblinoids mean orange. You'll note that many of my dungeon beasties have the same blue livery. That's because they do double-duty as my generic evil-wizard army for wargaming. Now.... if only I'd been smart enough to mount them all on the same shaped bases. That would have helped. 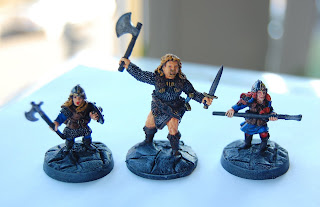 My wife has an odd sense of humor. Comedy juxtaposition: a half-ogre and a pair of female dwarves/gnomes from Reaper. 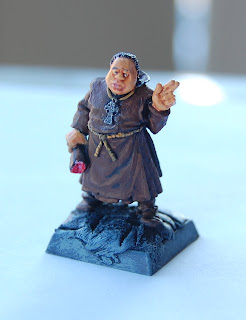 My joint-favorite of the bunch. In the photos the metal spillover on the habit from painting the cross is more noticeable. In normal light it's invisible. 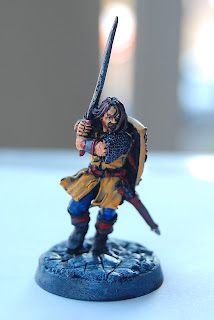 I think of this one as my King of Scotland figure. Not Robert the Bruce, he preferred an axe. Maybe William the Lion? 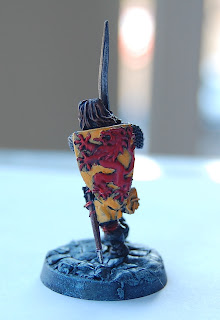 Rear view of the shield. I'm quite proud of this one. Think it's from a Reaper accessory blister pack. 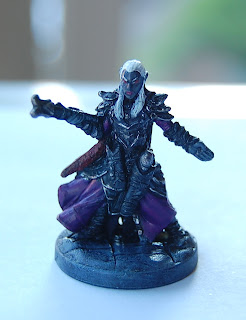 Re-painted D&D figure. All my Drow figures have this same color scheme.

Displac....er...uh. Are there any copyright lawyers around here? No? Er. Good. It's a Reaper Displacer Beast (think they call it something else though).

The Colonial Marines Strike Team I painted. Same scheme as last time, but with MP Umber added to the camo pattern on the armor.

The aforementioned pyramids. Dungeon scenery purchased for the grand total of £2.00 at the Burrell Collection in Glasgow.
Posted by Dangerous Brian at 19:18

I have the mantic skellies as well, and really like them!

Instead of heraldry you should try to think of a mark.

A spiral or something.

I agree with Lord Siwoc. A simple sigil is all they'll need. I'll see what I can come up with.

Thanks guys. I'll go paint a nice stylaised claw or something on the banner now.