Cruise of the Dead

As mentioned in my previous post, my OSRIC group came to a sudden end when the party failed to escape a dungeon. Thus, I'm now doing prep-work for a one-off zombie game using the Cascade Failure rules. We spent the balance of our last session coming up with character concepts for the PC's and a few dependants. So without further ado I give you the cast of "Cruise of the Dead"

And finally, the most important character of all:
The S.S Ramirez
Three Swimming Pools, five elevators, great night life and a shit-load of zombies. 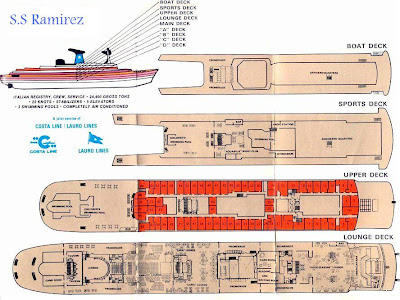 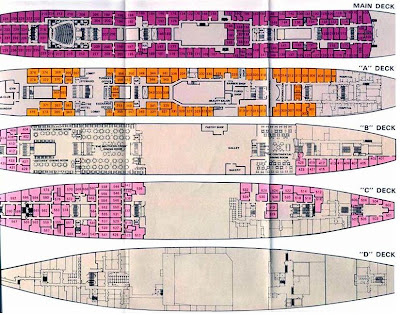 Posted by Dangerous Brian at 06:58

Really liking it so far.

Big ship! A lot of places to hide....also for the zombies!!!

Love the ideas so far...are you going to build the ship Brian ?

Thanks guys. Lots of place for the survivors to try and hole up as well, so plenty of choice for the characters when it comes to survival tactics.

I'd love to have been able to build a custom ship or even just print deckplans for the cruise ship. I've been planning an ATZ game with this group since I first encountered Vampifans blog way back in December.

Alas, my wargames factory zombies only arrived after a five month wait, mostly remain unpainted; and very few of my modern civilians have seen a lick of paint.

I didn't expect the OSRIC game to end so quickly. So, being as unprepared mini and scenery wise as I am, we're just going to have to run it as an RPG rather than as a skirmish/RPG with the ATZ rules.

Which is a damn shame, cos I can't help but feel it's something of a waster opportunity ATZ wise. Day Zero on a cruise ship would have been a thing of beauty.

I dig the cast of characters. In any zombie outbreak, the interplay with the survivors is always fascinating!

I agree. Which is why I'm taking bets on who kills that yappy little dog first. The zombies, or a PC?

This sounds really good, however, if i ran it, my players would literally be falling over themselves to be "just the cook"

Lol. My firefly/serinity character was just "the cook". A Korean cook. A Korean hit-man on the run cook who was good with "cooking knives".