Review: Vinyl Maps from Signs on the Cheap

First, the disclaimer: SignsontheCheap.com approached me a week or two ago with the offer of creating a free vinyl map or similar gaming related item in return for a placing a review on my blogs. However, there was nothing in the deal that suggested this had to be a positive review.

But it's going to be pretty damn positive anyway. Just take a look at this: 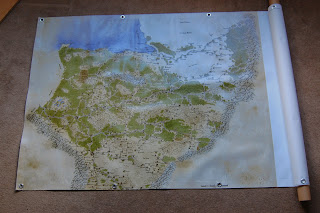 Although I never thought to include anything for scale, what you're looking at here is a 3 high vinyl map of the Empire and Kislev from the Warhammer World. Despite the quite considerable magnification to go from the original image here: 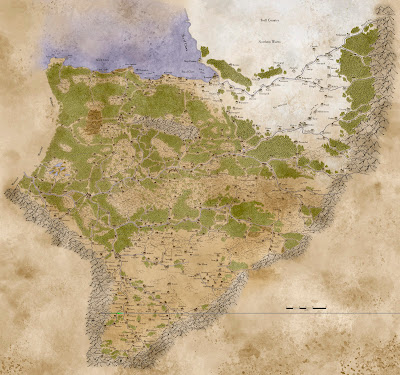 ...to the image printed on the vinyl, all the place names, rivers, mountains and other terrain features are clearly discernible and readable, with only minimal blurring. Someone more pedantic than myself might consider tidying up the place names with a permanent marker but there's really no need. The map is entirely readable even in quite dim light and frankly, looks pretty damn amazing too.

You'll notice that the image printed here is slightly truncated north-south when compared to the original image. That's because the guys at Signs on the Cheap noticed that the original file I downloaded from the web-site was corrupt, and had a band of randomly coloured pixels just south of where my map ends (you can see it on the original image if you look closely). They kindly suggested a number of options and we eventually decided simply to end the map just before the corrupt segment.

Delivery was extremely fast and proofs were emailed promptly only a day after I sent the map image. Anyone considering such a campaign map should certainly give signsonthecheap.com a good look.

I'm even considering trying to commission a proper vinyl battle-mat or two just to see how they turn out. I have a lot of old Classic Battletech hex-maps that I'd particularly like to see reproduced on a material considerably more durable than paper or cardboard. Watch this space and I'll let you know how I get on.