The OSRIC campaign on google+ has been going for a couple of months now, and I wish I could tell you all more about it. However, as it's a play-test for some new material Stuart Marshall (editor of OSRIC) is looking to release I'm afraid I'll be doing the honorable thing and keeping my mouth shut about the details.
What I can tell you is that Staurt's new mega-dungeon is a very well put together and dynamic place, with plenty happening in the setting that is triggered by the action of NPC's. Rather than being a "typical" static dungeon setting, where nothing really changes except as a result of player actions, we're constantly being surprised by changes to the world around us. Changes resulting from very plausible causes-and-effects that are helping to immerse us all in the setting.

We've had one character death so far (mine) and I have to tell you it was a great experience to be losing characters for a change rather than killing off someone else's. It seem's like forever since I've had the chance to actually play in an old school setting, rather than DM it. And I couldn't be playing with a better DM than Stuart. Most of us have been holding on to our magical items (rather than selling them for quick xp gain) and that's something which, because of the pressures built into the session forcing us to explore deeper and take greater risks, is probably going to hurt us all in the long run.

In the mean-time, we've been testing out new character races and character classes. Many are actually new takes on old favorites, but all have worked extremely well and added new elements to the game. One class in particular has especially captured my attention: a support/healer class that actually complements, rather than replaces, clerics and which free's up some of the cleric's spell slots for more than just healing.

I can't begin to hype this setting enough. In several months of gaming, we've encountered just four creature types that us old hand's in the party are familiar with. The sheer number of new races has added an unexpected element to the game: a certain degree of uncertainty over who we should be attacking outright, and who we might want to ally with first. That's gone a very long way to keeping the veteran grognards in the group on their toes just as much as the relative newcomers to dungeon-delving.

I've been keeping a campaign journal, but it won't be seeing the light of day until after publication of the mega-dungeon. Not unless Stuart want's to use it as a teaser. Can't wait to share out experiences with you all. 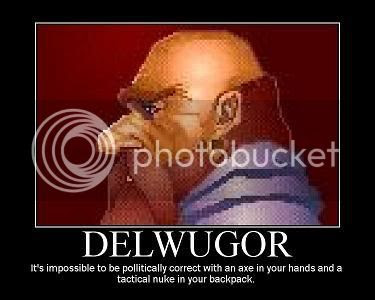