Barbarians at the Gates: Rules for the Barbarian in OSRIC

One thing sorely lacking in OSRIC from both a Harnic and a Hyborian perspective is the absence of a solid barbarian class. I've never been too fond of the later concept of the barbarian as a berserker warrior, preferring to take the class back to it's "Cimmerian" routes.

In my opinion, the Barbarian class as designed by Gary Gygax (published in Dragon 62 (I think) and Imagine magazine issue 2) probably comes closest to the ideal of the barbarian as noble savage, rather than frothing-mouthed berserker.

However, in my opinion, the Barbarian class as first-presented by Gary has some major flaws. For one thing, the class was not conceived with the usual Old School min/max stat requirements. Instead, players were allowed to roll a a variable amount of dice for each stat (up to 7D6 for strength) and choose the best three. So, instead of limiting the number of characters possessing this more powerful "sub-class" of fighter (as with the Ranger and Paladin) essentially anyone could roll up a barbarian and be assured of pretty good stats. It also included a number of secondary skills listed in the class description, assuming that the secondary skills system had already been adopted into the campaign.

The following home-brew character class, then, is my take on this flawed by otherwise exciting first incarnation of the Barbarian. It follows the usual format of minimum scores to qualify to the class, keeping the numbers artificially low when compared to fighters and does away with some of the secondary skills, likewise amending or deleted some other class features. it is my hope that this home-brew adapt ion stays true to the spirit of the original concept, while making a playable class that won't come to dominate an entire campaign. 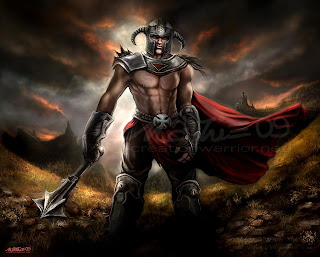 Barbarians are tribal warriors, equally at home in nature as they are upon the battlefield. Though often considered "backward" by their "civilised" cousins, the brave but superstitious warriors of Cimmeria, Pictland, the Black Coast and the Frozen North are mighty and knowledgeable in the arts of war. Putting knowledge of nature and terrain to good effect, the oft times poorly armoured and heavily outnumbered barbarians continue to turn back incursion after incursion from the armies of the civilised lands.

While the warriors of Aquilonia, Nemedia and Stygia are often professionals, trained and employed solely for war, the vast majority of Barbarians, though trained as warriors from birth, are farmers or hunters first and soldiers second. They may not march into battle, wheeling and changing face at the command of a drum roll, but each man knows that his kin fight beside him. And that should he fall, his wife and children will retain honoured places within the tribe.

This fierce bond of loyalty is often enough to drive individual barbarians to mighty, near legendary feats of heroism. Such hero's often feel the need to grow beyond the small, wooden palisade that encloses their home to venture out into a larger, more troubling world. 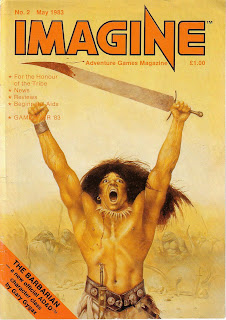 Armour/Shield Permitted: Any non-magical up to (but not including) plate-mail. Some cultures impose limits on the options available to beginning characters (Cimmerians shun metal armour, for example, at least until several near-death experiences have taught them the value of adaptation).

Weapons Permitted: Any non magical weapons selected from the following categories: 1H or 2H Sword, Any Axe, Any 1H or 2H Bludgeon, Spear, Longbow, Shortbow, Oil, Throwing Weapons. May not use the optional specialisation rules.

Weapon Proficiencies: 3 + 1 every two levels. Barbarians may not specialise.

Penalty to Hit for Non-Proficiency: -2 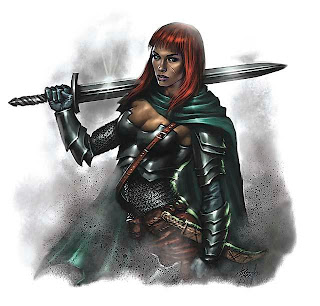 Magic Intolerance: Barbarians hate and fear arcane magic, and will (if given the chance) attempt to destroy any Magic-User or Illusionist based magical item if given half the chance. Barbarians do not hate and fear clerical or druidic based items however, though will be reluctant to take advantage of any permanent items of this nature themselves. They have no compulsion against drinking potions or using other, similar, one use items however. Provided, that is, their companions can convince them that the items providence is divine rather than arcane.

Barbarians may (reluctantly) fight and work alongside Magic-Users and Illusionists. They will, however most likely take every opportunity to convince these companions of the error of their ways. Even going so far as attempting to divest them of their spell-books and familiars, in some cases.

Magical Armour, Shields and Weaponry: Barbarians fear and detest magic. No Barbarian will ever willingly (or knowingly) equip himself with a magical item of this nature except in the direst of emergencies. Should a character be forced by circumstance to use such a weapon (say, when fighting against gargoyles or similar, mundane-weapon immune creatures) then he gains no XP whatsoever from that encounter, whether from combat xp or treasure xp. This penalty will continue until he has divested himself of these unclean items and undergone an hour long purification ritual in penance for his misdeeds.

Illiteracy: Barbarian characters who wish to begin the game able to read and write their native tongue must spend a bonus language slot in order to do so. Characters may also spend such a slot if the opportunity to learn this skill occurs through roleplaying and game-play. However, they must spend one such slot for every language they learn to read. Learning to speak (and read) Kushite would therefore cost the barbarian character two bonus language slots.

Wilderness Lore: In their natural environment, Barbarians can move silently, hide and climb walls as a thief of the same level -provided they are not wearing metal armour. However, they can ONLY do this in their natural environment (mountains for Cimmerians, tundra for Vanir, woods for Picts and so forth). They can learn to apply these skills in a different environment only after having spent a month of game time in the environment in question. For example, a Cimmerian who spent a month living in the Purple Lotus Swamps of Stygia would be able to climb, hide and move silently in Swamps as though they were his natural habitat. Potential habitats include: Dungeons, Urban, Forest, Hills, Mountains, Marsh, Tundra, Desert, Jungle, Arctic, Swamp and Shipboard.

Tracking: Barbarians may track with the same reliability as a ranger of the same level. However, this skill only applies in their natural habitat. Tracking in other habitats can be learned with time as for Wilderness Lore above. However, a Barbarian will never be able to track in a Dungeon, Urban or Shipboard setting.

Weary: Barbarians have a base 20% chance (+5^ per level) to detect an incoming backstab. Thieves or Assassins whose back-stab attempt is detected do not gain an attack modifier against the barbarian and, if there attack is successful, do not obtain a damage multiplier.

Sixth Sense: Barbarians have a base 50% (plus 2% per level) to detect “unnatural” magical energies such as magical items, powerful spell-casters and even demons within a space they occupy. This aura extends out to 60ft unless blocked by stone walls or thick doorways. They will be unable to pinpoint the location of the source. They will only know it is "close". Likewise, the barbarian cannot identify the nature of the supernatural presence. The prickling of thumbs or hairs-raised on the back of the neck warns the barbarian that something "uncanny" is present. Nothing more. This ability functions at all times, even when asleep and unlike a Paladins detect evil ability, does not require concentration. If the Barbarian character is asleep while a supernatural creature moves into the radius of this effect, the Barbarian has a chance of awakening equal to his chance of detecting the new supernatural presence when awake.

Note that the presence of familiar magical items (such as those carried by the party) and specific creatures (such as a rangers companion or magic-users familiar) will not trigger this sixth sense after a sufficient period of acclimatization has passed (DM's fiat but one game-week is suggested).

This ability allows a barbarian to detect the presence of a magical effect such as that which creates an illusion, without being able to identify that an actual illusion is present.

Saving Throws, Attack Rolls, Attacks per Melee and so forth are as per the Fighter Class. XP progression is as per the Paladin class.

Posted by Dangerous Brian at 16:07

The "Berserker" mislabeled as Barbarian is one of my pet peeves with fantasy gaming. I don't know why more people aren't bothered by it, but apparently the barbarian has come to be defined by his berserker rage in today's games, for some reason.

Couldn't agree more. It's a sad departure for the genre, if you ask me. Yet the hype around 3rd eds Barbarian-as-a-berserker was astonishly fairly positive. I personally felt it represented more of a lost opportunity than anything else.