New Side Project: OSRIC in The Hyborian Age

Having spent the last few days playing Age of Conan online, I'm well and truly in a "Conan" mood. So as a side project, I'll be working on a sandbox style campaign for Conan as well. Or rather, a series of sandboxes- why restrict the players to just one small part of a wonderful setting? 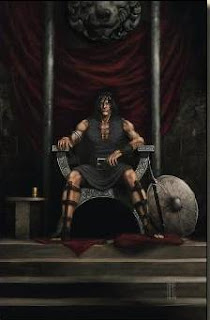 I've always wanted to use the N4 Treasure Hunt module, in which the characters are flung together by a shipwreck and have to escape a haunted island before a great cataclysm befalls it. The adventure has such a great sword and sorcery feel to it (including an encounter with a "Petty God") that it almost screams "Conan!"

So, I'll imitate the Age of Conan game by starting the campaign in the jungles of the Barrachan Isles. The great thing about this is it means I can replace the warring humanoids in the various island modules with, say, Pirates and Picts. It also gives me leave to strand the characters in a "Pirate City" (Tortage) and allows me to make good use of the many island based adventures released for early editions of D&D and AD&D over the years. Isle of Dread anyone? Isle of the Ape? Lost Island of Castamere?

I still want to develop Harn as my main "go-to" campaign sand-box. But I think that I'll introduce my players to OSRIC prior to the Harn campaign by playing through Treasure Hunt, which is, frankly, an excellent module and one of my very favorites.
Posted by Dangerous Brian at 18:22