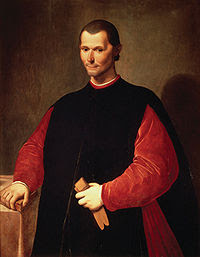 Today sees the birth of a new, semi-regular feature I like to think of as "Machiavellian Monday". Every Monday I'll be looking a Chapter from Niccolo Machiavelli's seminal work, "The Prince" and applying it to Old School gaming techniques.

So lets kick things off with Chapter 1: How Many Kinds of Principality There are and the Ways in Which They Are Acquired.

"All the states, all the dominions under whose authority men have lived in the past and live now are have been or either are principalities or republics. Principalities are hereditary, with the Prince's family as long-established rulers or they are new. The new are completely new, as was Milan to Franscesco Sforza, or they are like limbs joined to the hereditary state of the Prince who acquires them, as with the Kingdom of Naples in relation to the King of Spain. Domains so acquired are accustomed to be under a Prince , or used to freedom; a prince wins them either with the arms of others or with his own, either by fortune or by prowess.

Thus we have just read the entirety of the first chapter. At first glance, there's not a great deal there that can be properly applied to gaming. However, on deeper thought, there is more than you might think.

If we view the state as an adventuring party, we know then that the leader(s) are either born to the position (such as in the case of a noble leading his retinue on adventure) or else elected. The style of leadership in the party is an important aspect to consider in and of itself. Not all "republic" model parties actually elect a leader. Many determine major group actions through a cast of votes; though, hopefully, they have the sense to elect a "battle leader" to prevent debate mid-combat. Additionally, the party leader (or battle leader) might change from expedition to expedition, much as the leader of a Republic might change from year to year.

In any adventuring party, especially an Old School, dungeon-venturing one, it is important to have a clear cut chain of command. Particularly in combat. It is vital to know whose instructions the party should be following in a scrap, if only to avoid a situation where half the party charges while the other half runs away.

Finally, there should be clearly established rules for how a leader is chosen. Is it by social rank? Character level? Or by election? If by election, when is it appropriate to select a new leader if one is required? How (and under what circumstances) can a leader be deposed and a new leader selected? Who shall rise in his place if the leader should fall in battle? And who shall replace the new leader? And so on and so forth.

If all these questions are answered prior to the groups entry to a dungeon, the groups chances of surviving to exit it again are certainly magnified. If the group has not determined who is in charge before the first blow is struck, then it is already too late. Confusion, and thereafter bloody carnage, is sure to follow.
Posted by Dangerous Brian at 15:12

I am a little confused.

International relations is a dynamic environment of competition, while a dungeon environment is a fixed challenge (in Old School gaming) against which someone is tested. There is no "reaction" per se. The dungeon doesn't sense your weakness and pounce.

Who are we politiking against?

The environment. And those who "live" in it. A dynamic dungeon setting (and the wilderness around it) should at least seem to shift and change; and not just in responce to the characters actions.

The "Realpolitik" I'll be looking it is how the PC's interact with the NPC's and political bodies within the campaign world (or sandbox)as a whole, not just in the dungeon environment. Although it's entirely suitable for use in a typical dungeon as well. Wan't to negotiate a treaty with the orc tribe? The Prince has lessons that apply. Want to break that treaty and crush the tribe, now you no longer need them? The Prince can give you instructions on how to do that too.

In essence, the articles series will be about applying the instruction Machievelli gives to Princes, and looking at how they apply to adventuring parties as well.