Sindarin: The Elves of Harn

“The Sindarin mostly live within the confines of the Shava Forest. Outsiders regard them with awe. Sindarin culture is aesthetic and efficient. peaceful and gentle. Individual elves can be both magnificent artisans and formidable warriors.” 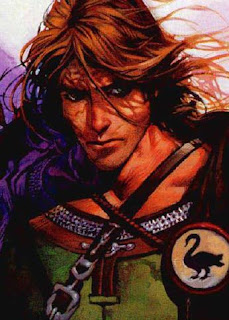 The Sindarin, the elves of Harn, appear little different than men, at least to the eyes of men themselves. Near-immortal, they rarely die of disease or old age although many meat their end at the point of a sword. Over-time, the Sindarin forget skills once mastered and no longer practiced, so that a Sindarin who was once a mighty swordsman in the distant past might become little more than a fumbling amateur in later life. They also tend to forget events of long ago, recording them in song and verse for the very purpose of recalling their own history. Indeed, when a Sindarin living today claims to remember the Battle of Sorrows, many centuries ago, he is actually recalling the events as recorded in song, rather than as recalled by actual memory.

The elves of Harn can live for thousands of years, rarely appearing to age beyond early adulthood in all that time. Their rapid healing rate allows Sindarin to recover quickly from wounds that might slay a human, and as such they rarely scar even from serious wounds. However, they can die from thirst, starvation and grievous wounds. Nor can they regenerate lost eyes or limbs. While they do not visibly age as they grow older, the repeated erasure and replacement of distant memories can lead to bouts of insanity or psychosis. Even the youngest elves tend to forget seemingly unimportant details very quickly and can be very absent minded. While a human might recognise an acquaintance from years before and even recall his name accurately, a Sindarin is likely to forget even the face of a good friend or family member after a certain period of separation.

Sindarin rarely allow themselves to display extremes of emotion. It is not that they do not feel rage or anger, simply that the choose to hide them. After all, time is on their side. They can afford to out-wait an enemy rather than confront him directly. For similar reasons, a Sindarin will think nothing of spending three of four days studying a blade of grass even when his travelling companions are in a hurry. They simply do not feel the pressure of time's passage the way a human might.

When a Sindarin wearies of their existence, they board ship and sail to new plans of existence. Some human sages conjecture that this is little more than a metaphor for suicide through the medium of drowning at sea. 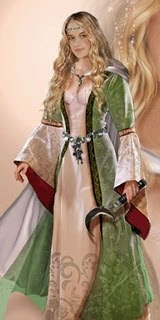 are a dwindling folk -only 5000 or so remain on Harn from the multitudes who once followed their God, Seim, to this world. When their god, Siem, departed Harn, he summoned the Khazdul, the dwarves of Harn, to ward and watch over his chosen children, so beginning the epoch known to history as the co-dominion, when Khazdul and Sindarin ruled over Harn jointly and in peace.

In time, the Sindarin and Khazdul welcomed the humans peoples known today as the Jarin to Harn, though in time they grew alarmed by the swift growth of the Jarin and their despoiling of the land. Yet before bloodshed could ensue, a second race of men, the Atani, invaded the islands. For a time, Jarin, Khazdul and Sindarin alike warred against the invaders, but with the death of their King, the Sindarin retreated into the Shave forest, abandoning their dwarf and human allies. They have remained there, living in isolation with only a few thousand Jarin servants, ever since.

The Sindarin are divided into family clans, all of which are considered freemen by the standards of Harn's human kingdoms. Clan councils are often called to discuss internal matters, but most problems are resolved through negotiation – there is very little crime in Sindarin society. What little there is of it is judged by a legal system derived from that the of the Khazdul, based on the concept of Vendetta. Society as a whole is governed by King Aranath and the Vulparen, his thirteen member advisory council.

The inhabitants of Evael are not taxed, and the economy exists on a basis of barter rather than currency exchange. The system is one based on trust, the exchange of favours and ties of kinship. In any human land such a system would fall apart immediately. It works for the Sindarin primarily because of their attitude to wealth (they rarely concern themselves with acquisition except for items they actually need – although even the simplest tools will be works of art in and of themselves) and also because such transactions are so few. Almost every Sindarin clanhold is entirely self sufficient save for a few imported minerals such as metals and gemstones.

It is considered almost a rite of passage for young elves to spend fifty to a hundred years travelling Evael, visiting every clanhold in turn. Some, a significant few, extend this journey further to an exploration of all Harn. Such individuals often make Trobridge Inn, a relatively well known crossroads frequented by travellers from many lands, their first stop. The Inn is an excellent place for a Sindarin youth to blend into the greater mass of humanity without revealing his true origins.

Posted by Dangerous Brian at 01:00