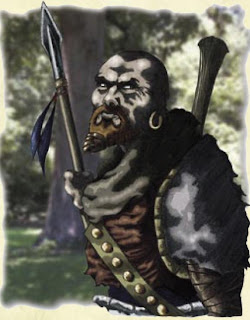 One of the problems of converting a humanocentric world such as the Hyborian Age to the OSIC system is the general lack of traditional Old School opponents. Goblins, Kobolds, Orcs and the like just don't fit in the Hyborian Age, except as the very occasional (and geographically very isolated) experiments of a deranged wizard such as Thoth-Amon or the Hyperboreans. Fortunately, given that the Barachan Isles are just to the South of the Pictish Wilderness, I don't need to look too far for a solution.

Traditionally, Hyborian Picts fill the “bogeyman” or “savage monster” role occupied by orcs and other humanoids in most fantasy settings. Given that some of the Picitish tribes idolise and have chosen certain sea or coast-dwelling creatures for the totem animals, it's not hard to justify the presence of sea-going Picts on the Barachans.

To give me plenty of lee-way for establishing multiple power-blocs (and a rationale for why the Picts haven't swept away all opposition on the Isles, including the city of Tortage) it becomes necessary to go beyond the relatively few canon (or near canon) Pictish tribes of a nautical nature and create a few of my own. I've also adapted a few of the Pictish tribes with jungle-animal totems to my needs. All of these tribes are far smaller in number than their counterparts in the Pictish Wilderness. In part due to the relative scarcity of land and fresh water. Mostly due to contstant internecine tribal warfare.

Once I have my modules picked out, and have a better idea of what my sandbox map is going to look like, I'll be able to establish geographical territories to each tribe. But for the time being, the Pictish tribes of Baracha are as follows:

Bat Tribe: Lifted from the Age of Conan MMO, the Bat Picts train dire-bats and giant bats as guard-beasts, hunting animals and even mounts. Like their name-sake, they are commonly most active at night, their preferred time to hunt or attack. Their lifestyle means they have above average (but not supernatural) night vision but, due to a penchant for sleeping in caves during the day, can be adversely affected by bright light.

Crab Tribe: One of the rare few Pictish tribes that wear any form of armour, the Crab tribe have taken to hunting Crab-Men to strip them of the shells, which Crab Picts thereafter wear into battle. This sacred hunt has taken on overtones or a rite-of-passage for the younger men of the tribe. Crab tribe warriors fight with two weapons at once, usually a serrated club in either hand, though some will wear a small shield (made of Crab-man Pincers) as well.

Crocodile Tribe: The Crocodile tribe wear the hides of their totem animal into battle, often stretching the hides with sturdy sticks to make functional and effective shields. There favoured weapons are clubs, spears or javelins studded with crocodile teeth. They are adept at ambush and, like their name-sake, adept sprinters over short distances. A favoured trick of Crocodile Picts is to lurk just beneath the water, breathing through a hollow reed, before leaping to the attack.

Lobster Tribe: Much like the Crab, the Lobster tribes elite warriors gird themselves for battle in the shell's of giant lobsters, many slain generations ago and patched with clay. They paint themselves with a red dye made of boiled lobster shells. Traditionally, they sacrifice their victims by boiling them alive inside a giant lobster shell. The Lobster and Crab tribes have so many traditions and rites in common that local sages have postulated that one might be an off-shot of the other. 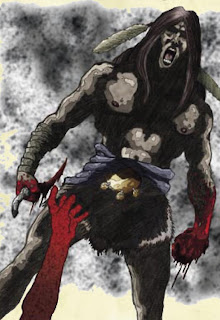 Shark Tribe clad themselves in supple shark skin, which assists them to swim at great speed underwater. Their weapons often feature shark teeth or serrated designs. Warriors emulate their shark totem with near ceaseless motion, never remaining still during their waking hours. When a Shark warrior is incapacitated by wounds, his brothers fall upon him in a frenzy of teeth, daggers and nails, consuming him raw as an offering to the Shark Spirit.

Panther Tribe: Panther tribe warriors paint themselves black and excel in stealthy movement (many are thieves or assassins). They favour a pair of knives or fighting claws as weapons and many file their teeth into sharp points for biting. Their battle cry mimics the hiss-roar of an angry panther with uncanny accuracy.

Spider Tribe: The Spider tribe often coat their knives, spears and darts in spider venom, using different varieties depending on whether they wish to capture or kill their prey. They attack and hunt in packs of eight, often springing from the trees or leaping up from under camouflaged maps to assault their foe. Every year, their chief mates with their Shaman, who is always female, in an orgiastic rite that culminates with the Shaman gnawing the head from the shoulders of the still-living previous chief before mating with the new. It is said that when the semen of the slain chief falls upon the ground, a deranged half-spider, a half-man spider creature is summoned. Such creatures are often kept to lead the tribe in battle, or else form a protective curtain of scouts around the encampment. They are one of the smallest tribes on the islands, yet also among the most feared, even by other Pict tribes.

Dolphin Tribe: Warriors of the Dolhin tribe often enter the city of Tortage to trade for weapons of bronze, iron or steel. No woman is safe around them. The warriors of the Dolphin tribe take no permanent mate, preferring to gang-rape any women of the tribe (or any other tribe) at whim. They sometimes choose to forget that this behaviour is illegal even in a cess-pit like Tortage. They consider any woman they choose to be fair game, as the warriors “right”. His foul reward for a successful “hunt”. Men (and woman) go quiet whenever a Dolphin warrior enters a Tortage inn. Patrols of Skull Guard follow them everywhere. Alas, most dolphin warriors seem to regard their unsubtle escorts as little more than another obstacle on their “hunt”.

Serpent Tribe: Like the Spider Tribe, the serpent tribe often coat their weapons in poison. They prefer to strike from a distance before fleeing, allowing the poison to do its work, before returning to finish off a weakened or dying foe with knives. They keep many snakes, particularly of the poisonous variety, as pets and guard animals.

Tortoise Tribe: Another of the more “friendly” tribes, the Tortoise carry heavy shields and wear plate armour formed from Tortoise shell into battle. Slow to act, slow to anger and slow to move, the implacable tread of the Tortoise warriors strikes fear into the heart of any Pict who hears it. They are a small tribe, but militarily one of the most powerful. The exist in a near-constant state of war with the Shark, Spider and Dolphin tribes and rarely display any form of emotion.

Posted by Dangerous Brian at 19:22

You ever looked at the D20 Conan stuff? Lots of useful setting info, cool alternate rules, and *gasp* a way to make melee characters not suck!

I've looked at the books for setting information, but I have to admit I've never even bothered reading through the rules. I take it their worth a look?

Hi everyone! I'm originally from London but am living in Berlin at the moment.
Gotta like this place!