I've Been thinking a little more on Tortage. On the grounds that it might be very atmospheric to see the same pirates ships returning to Port time and again I've decided to come up with a few "stand-out" ships that the players are likely to take notice of with each visit. Some of them serve as adventure hooks and plot devices. Others will just be scenery.

All five (with the exception of "Ravager of Sorrows") will be in the harbour when the PC's arrive. Ravager will arrive behind soon after. Each day, each ship has a cumulative 5% chance of leaving port for 1D4+1 weeks. The exception being "The Black Ship" which shall leave port to return in 1d4+1 days. Another 1d4 ships will be in dock at any given time. These may (or may not) be detailed later.

"The Black Ship": A 120 oar Stygian galley, with three banks or oars and a fully enclosed top deck. No one ever admits to seeing any of the ships crew on deck, let alone anyone entering or leaving. Whenever this ship docks, a very palpable pall settles on the city, even the fiercest of pirates keep their roistering toned down to a near sepulchral degree when the Black Ship has docked. Never coming into port alone, a swarm of smaller Dhow's perpetually sail alongside, maintaining a perimeter and slaying all who come near. Even Lord Azzur, Pirate prince of Tortage, must await permission -and presumably an invitation- before boarding.

DM Notes: This ship carries a Stygian Sorcerer of the Black Ring, his retinue, his undead servants and anywhere up to around 250 living crew and marines. The ship and it's crew will be a constant foil for the adventuring party -every time they turn up at an old ruin, the Stygians have been there, are there, or are likely to be on their way. Many of the Sorcerers they encounter throughout the Isles have connections with this ship. Just what is it that this ship and it's mysterious captain are up to?

The Ravager of Sorrows: This will be the pirate galley - crew approx 100- that the characters first meet in the opening adventure of the campaign. While most of the crew are likely to be killed during the course of events, some will survive to steer the ship back to port. How great a role it plays it the remainder of the campaign is up to the players. Black sail with a weeping skull motif.

"The Son's of Crom": Not so much the name of a ship as the name of it's crew. A captured merchant galley with a crew of about 30-40. All Cimmerian. The captain will accept only his fellow hillmen among the crew, so despite their recent success as coastal raiders, the groups numbers remain fairly constant. One sudden reversal however, might be enough to reduce the Son's to a mere handful. Always badly handled and in poor condition.

The Woeful Tide: A slave ship belonging to the Slave Lords, it carries a relatively small crew and can squeeze a great many slaves, all lying flat on their backs, into the hold. The ship reeks. The locals swear they can smell it coming a full day before it appears at the docks. Red sails. 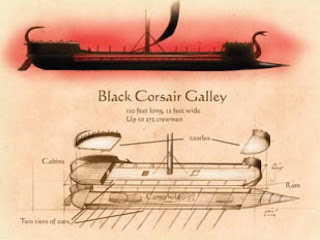 The Face of Chaos: The personal galley of Pirate Prince and Lord of Tortage, Varek Azzur. All know that when this ship is no longer in port, neither is it's captain. At such times, the brother of Prinze Azzur, the self-proclaimed Sultan Mehmet, "rules" Tortage. Crueler and far more sadisitic even that his brother, whose cruelty at least always has a purpose, all know that when Mehmet rules, punishments become all the more harsher and the "laws" of Tortage all the more unpredictable. Black sail with a demonic, leering green face.

A Final Thought on Sailing in the Hyborian Age:

It occurs to me that Hyborian Age ships are coasters at best and most often simple galleys. Historically, galleys had to be beached at night, mostly because the ships weren't really capable of riding out bad weather by day let alone at night. So would there only be one or two settlements in the Barachan Isles? Perhaps I should have a few more coastal villages in sheltered bays, whose economy relies on providing services to beached crews, much as there was in the Mediterranean during the Bronze Age. However, the Mediterranean didn't have an infestation of Picts? Perhaps the ships do still beach at night -but put out a party of armed guards and light torches for protection against Pict raids. Something to ponder.
Posted by Dangerous Brian at 11:32