Digging the Sandbox: Against the Slave Lords. 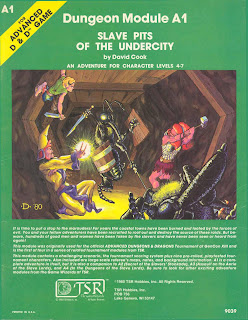 I'll be liberally spreading adventure hooks throughout the sandpit for the next series of modules: A1-4 Against the Slave Lords. A classic module set originally designed as tournament modules, the A series could have been purpose designed for Hyborian gaming, were it not for the overwhelming presence of humanoids. It even has carnivorous apes and insect-men, all of which are very Howard-esque in and of themselves. All the A serie modules have been reviewed to death in the past, so I'll concentrate (briefly) on what makes them so apt for my campaign.

The first module presents a Slaver base in a Ruined Temple within a city, meaning that in my sand-box the Temple (and it's sewer level) will be located in Tortage. The module is extremely well written, with a number of challenging traps and encounters. It features a new race of insect men, the Aspis, whom I happen to like very much and will liberally sprinkle throughout other modules (along with lizardmen) to break the monotony of Picts and Pirates. The A-2 Module, Secret of the Slaver's Stockade, is my favourite of the four. Set in a hill-fort, it represents a place where the slavers store their “stock” prior to taking it to market. The module features a number of excellent “Saturday Night Specials” including fun with mirrors, a nice little encounte 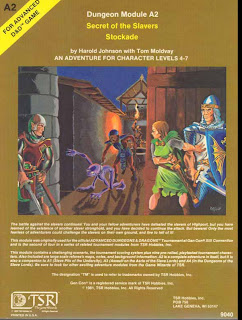 r with the restless dead and a much more memorable encounter with an NPC who could teach big Arnie's character in Predator a thing or two about guerilla warfare. Finally, even the main villains have character – including a Blind Swordsman and great-sword wielding ogre (a huge Cimmerian in my campaign) who knows a few nasty (very nasty) manoeuvres.

As far as conversion goes, both modules are relatively easy to place. A-1 will happen in (and below) Tortage. A-2 will be sited in a Hill fort on one of the islands. All of the modules have a number of humanoid encounters which I'll simply replace with correspondingly dangerous humans. Even the undead encounters have suitably Hyborian themes. All this means I expect the Slavers to feature prominently as the main mid-level campaign villains, especially given that the PC's (as escaped slaves themselves) are very likely to hold a grudge against their captors.

Unfortunately, A2 is where the Slavers mini-campaign must come to an end for my Hyborian players. As much as they are excellent modules, the third module relies on the players visiting a "hidden city" and the fourth involve escaping from the clutches of their slaver captors. I've always hated deux ex machina style railroading, and module three requires that the characters lose a battle to ensure the lead in to the excellent fourth module in the series. I suppose it's entirely possible to take the players out of the Barachan Isles to a city in a foreign land, but in my experience once the players leave your sandbox it can be damned hard to get them back in it. Alas, therefore, A3 and A4 are consigned to the "no" box.

Even discounting the later two modules of the series, A1 and A2 add two new locations to the campaign. One location added to the Tortage Map, and another added to the wilderness map. Namely the Ruined Temple (which I'll be calling "Slaver House") and the Hill Fort stockade itself.

Posted by Dangerous Brian at 23:18