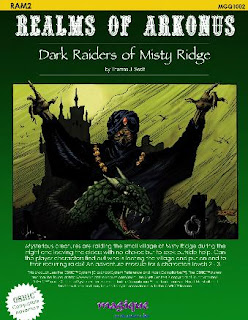 Once again, I've read and reviewed another pair of modules with an eye to including them in my Hyborian Age Sandbox campaign. This time I look at two modules designed specifically for OSRIC. Here are the results:

Misty Ridge is a module designed specifically for OSRIC. It features the traditional “help the hapless villagers” trope and introduces both a new monster race and a new player race . At 18 pages it's about the standard size for a newer module, but the problem is, other than the new race and the new monster, there is very little to make it stand out.

From my Hyborian Age campaign-conversion perspective, the fact that it centres on a relatively normal village atop a sea-cliff is, perhaps surprisingly, problematic. The Barachan Isle's are pirate isles after all, so I want as few permanent settlements as possible. Apart from the odd Pirate Cove, I already have a Slave Village, the Village of Women and Tortage. Now, the Island chain is about 200 miles long and features 13 islands, but even so, given I have to find room for all the Pictish tribes and ruined sites, I don't have much space for villages which, in all honestly, probably would not last five minutes in a region ruled by Pirates. As much as I plan to have a (small) part of the Mainland as well as some Argossan and Zingarran settlements (naval bases, more or less, in modern terms) on the campaign map I can't justify filling a slot with an unexceptional village like Mistyridge for the sake of an average module. True, I can probably get away with running multiple modules out of one village -but how many problems can one little village have? At least, without driving the residents away.

So, I'm afraid Misty Ridge becomes the first module in the “No” pile. It's decent enough as modules go, but too vanilla to make the final cut.

The Sarcophagus Legion, on 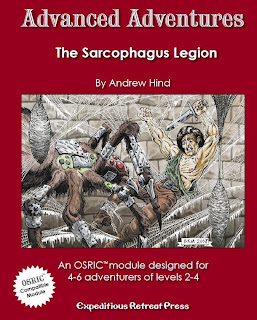 the other hand, seems to have much better prospects. Although designed for a Middle Eastern type setting, with endless deserts and featuring dervishes as the foe, it includes some very Sword & Sorcery-esque backstabbing and betrayal. The Sultan's intended is missing, captured by those dastardly Dervishes, and the party have to rescue her. In true Hyborian style however, things are never that simple where a pretty face or rich women is concerned.

It's a well written, gritty little module with plenty of twists and turns and -best of all- doesn't require the addition of a village to the map. Why not? Because the Sultan in question is the younger brother of Tortage's Pirate Prince. I'll just replace the dervishes with a daring crew of Pirates or Slavers and away we go. I'm going to base the climate and terrain of the Barachan Isles on the Canary Isles, so there will be plenty of volcanic, sandy landscape on the southernmost islands for the wilderness part of the module. Thus, the module is relatively painlessly converted. Oh, I nearly forgot, the Dark Dwarf sorcerer: he becomes a rather short and hunchbacked magic user. All done.

So, the Legion makes the cut, bringing the following locations to the sandbox: A desert-like stretch of terrain on one of the main southern islands. The Black Plume Mine and a Ruined Temple.

Next instalment: Against the Slave Lords.

Posted by Dangerous Brian at 01:22