Digging the Sandbox: B1 In Search of Treasure 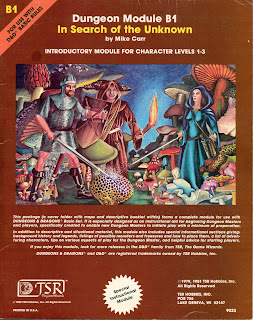 This module has been reviewed in detail a great many times before, so this post will be (unusually) brief and succinct for a change.

The premise of the module is that a cavern complex once used as a base by a pair of adventurers has recently been rediscovered and is now ripe for exploration. The two dungeon levels included are well described with a few nice "specials" including an interesting magic-mouth routine, to keep the players guessing.

The real gem of the module however, is the way it's written expressly for both New Players and New GM's, with an extensive section offering advice on how to play (and run) the game for beginners. It's this well written section which is probably the source of it's persistently high praise by just about every Old School type who has ever reviewed or played it. I'm sure somebody, somewhere, didn't like it (and not just because they've played through it umpteen times by now) but I've never met him.

Now the main area of concern for me is, once again, how easily can I adapt this to the Hyborian Age? The beauty of this module is that it doesn't actually assign either monsters or treasure to individual room keys. Instead, the DM is supposed to pick a dozen or so of each from a list of thrity or so and place them around the dungeon prior to play beginning. Coincidentally (hardly) giving the module a fairly high replay value, since it'll never be the same treasure or monsters in the same room twice. This design methods works especially well for me, as it means I can ignore the lists and simply put whatever I like there. Now, once again, Picts are the first thing that spring to mind. However, I'm already all-Picted out (as I imagine my players will be by this point) so I have to think of something else. Perhaps the crew of a mysterious Stygian galley that's been lurking in the Tortage Harbour for a considerable period of time? If so, what are they looking for?

This question could be answered by the next point. If two adventurous types are going to build a fortress, I imagine they would build it near an adventure site of some kind -so why not place it near the Acheronian Ruins, the sand-box Mega Dungeon. This means that the inhabitants (whomsoever they might eventually be) could be using it as a convenient base for their own exploration of the ruins. Que rival adventurers anyone?

B1 is an excellent module, well deserving of it's sterling reputation and well-thumbed place on the shelves of any Old School Gamer. Yes, it's been played to death by many gamers, but fortunately, my group will be almost certainly delving it for the first time, with the possible exception of Andy, the only other veteran gamer in the group I'll be running the campaign for; making over-exposure a non-issue in this case. Fantastic. This is one dungeon I never get bored of running. I just wish someone else would DM it so I can actually get to play through it for once. You know, just to say I've done it.
Posted by Dangerous Brian at 01:36