The Necromancer: A New OSRIC Class. Part I 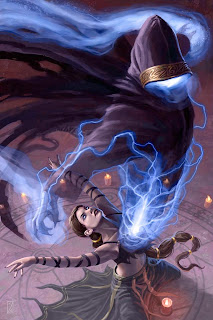 The Necromancer Character class depicted here is adapted from the version published in White Dwarf number 35. While the flavour text has changed considerably, there are very few mechanical changes to the class as invisioned by it's creator, Lew Pulphiser. Those changes relate mostly to making the Necromancer specifically a Magic-User sub-class rather than the cleric derivative it was originally intended to be.

Necromancers are a very specialised form of magic-user, ones with an unholy interest in the workings of undeath and a morbid desire to prolong their own life through the study and animation of corpses. The "typical" Necromancer (if there is such a thing) is a loner who vastly prefers the company of the undead to living beings, who serve to remind him of his own mortality. Such sinister figures rarely submit their will to anyone save themselves, or their master in the dark art's they pursue. Humanoids rarely enter the service of such a being, lest they wind up serving their masters whim as experimental subjects as well as guards. Even animals tend to avoid a Necromancer, warned away by the all-pervasive stench of death and decay that surrounds them.

As a Necromancer ages in his craft, they become more and more repulsive to other, living beings, loosing what little grasp of their own humanity they once possessed. Desperate to maintain their unholy lifestyle, they must frequently sacrifice intelligent beings in dark rituals to maintain their power, absorbing the life force of the prey to maintain their sinister powers. As they lose more and more of their humanity, they gain a greater affinity with the negative energy of the undead, no longer able to heal themselves naturally or through cure spells, instead requiring the sacrifice of a living being in a long drawn out ritual culminating in the consumption of the victims flesh and blood.

Loathed and hated by all around them, Necromancers face persecution from all sensible folk, yet in certain lands they have found welcome and even high status, though such lands are dark and benighted places indeed.

Minimum Scores: Int 12+, Con 14+ and Wis no more than 12. Cha is also important, as explained below.
Hit Die Type and Number: D4 (max 9) - Please note this does not match the figure given in the advancement table below. Substitute a D4 instead.
Alignment: Any evil
Experience Bonus: none
Armour/Shield Permitted: none
Weapons Permitted: Dagger, Staff, Sickle, Scythe, Flaming Oil
Weapon Proficiencies: Pick 1 +1 every four levels.
Non-Proficiency Attack Penalty: -4
Saving Throws & Attacks: As Magic User of the same level. 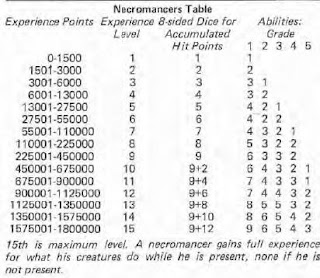 Magic Items: The necromancer may use potions, rings, rods, staves, wands and misc. magical items. He may not use Cleric, Magic User or Illusionist scrolls. Nor may he use any magical armour. He may only use magical weapons with which he is proficient.

Spell Casting: The necromancer may cast a certain number of Necromancer spells per day depending on his character level. See the Necromancer Advancement Table for details.

Control Undead: The necromancer automatically controls any undead that are of his creation up to his maximum limit of Hit Dice (see below). He may also Rebuke and Control Undead as per an evil cleric of the same level (though this does not require a magical item or any other prop, simply an authoritative command that they obey him). Once he has successfully used his Control Undead ability on an undead creature, that creature remains under his control until one of the following conditions occur:
These conditions also apply to any undead created by the Necromancer. The maximum Hit Dice of undead under the Necromancers control at any one time is equal to his Character level x2. However, undead left in place with orders to guard a specific location do NOT count towards this total. Therefore, even a relatively weak necromancer can "command" a mighty horde indeed.

A Necromancer gains full xp from any kills made by undead creatures under his control while he is present and in line of sight. He receives no experience from their kills otherwise.

I Am Your Master: Any cleric attempting to turn an undead creature under the Necromancers control in the presence of the necromancer subtracts one from their check result on the Undead Turning Matrix for every two levels of the necromancer.

The Blood is Life, the Blood is Unlife: Necromancers do not heal wounds naturally or by use of cure spells. Instead they must conduct an hour long ritual in which an intelligent being is sacrificed in order to heal themselves of any wounds or disease. The ritual requires special equipment including an alter and sacrificial knife. The Necromancer heals himself of damage equal to a total of half the victims hit points at the time the ritual began. Otherwise, a Necromancer can only be healed by the fifth level Necromancer spell, Drain Health. Even reversed cure spells have no effect.

Appease the Dark Ones: A Necromancer must periodically make a special sacrifice to the forces of evil and undeath or else lose his powers. The frequency of sacrifice and the rarity of the victim increase with the Necromancers level in accordance with the table below. If the Necromancer misses a ritual, he loses all his non-spellcasting class abilities until such time as he has "caught up" with the missed sacrifices. Even then there is a cumulative1-in-6 chance per missed sacrifice that a demon or powerful undead entity arrives to claim the necromancers soul instead of accepting the sacrifice. 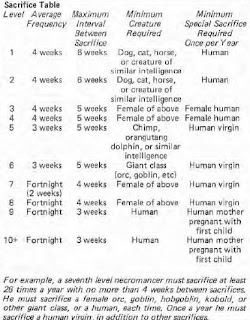 The Power of Undeath Compels Me: As a necromancer rises in level, he becomes more and more like an undead being himself. His appearance becomes more and more cadaverous as he begins to lose touch with his own humanity. Each time the Necromancer gains a level in the Necromancer class he must permanently lose a point of Charisma. At second level his eyesight fades, becoming more accustomed to dusty crypts than the world of the living, and the Necromancer gains infravision out to sixty feet. He also gains the ability to see into the Underworld even in his waking hours, granting him a %5 + 1% per level of seeing an invisible creature.

You Cannot Kill What Does Not Live: Necromancers who are slain by any means will always arise again as an undead being on midnight of the 13th day after death. This occurs even if the body has been completely destroyed. the necromancer will rise as a form of undead with hit Dice equal to his Necromancer levels when alive. necromancers of 9th - 14th level always return as vampires. Those of fifteenth level will return as a lich.

Temple of Bone: At tenth level the Necromancer may create a special Stronghold type known as a Temple of Bone. A Necromancer can possess only one such temple at a time, but may create another should his existing temple be destroyed. The temple must be constructed of human, humanoid and demi-human bones, using the blood of those slain to produce the bones as mortar.

Construction requires living beings (undead lack sufficient dexterity) and takes 10 man hours and costs 10gp for every cubic foot of walls, floor and ceiling in the Temple. Every ten cubic feet requires the bones of fifty man size creatures and the blood of five. The Bone Walls of the temple are supernaturally strong - treat as the strongest type of stone for causing damage. While in his Temple, the Necromancer is at his most powerful. All saves against his spells are at -2 and all attempts to turn undead are at an additional -2 (cumulative with other modifiers such as the presence of the Necromancer). While in his Temple the Necromancer radiates damage at a rate of 1/hp per turn. he may also call additional skeleton troops from the walls - up to one skeleton per ten cubic foot of wall per day. These skeletons do not count towards the maximum number of Skeletons the Necromancer may control at any given time. No matter how many skeletons are destroyed, the Necromancer can always summon as many again the next day, unless the temple has since been completely destroyed.

Phylactery: At fifteenth level the Necromancer learns the secrets of becoming a Lich. He can become a Lich at any time by spending 10,000gp on a phylactory and performing a night long ritual. Should he die after reaching fifteenth level but before performing this rite he will rise again as a lich. However, if destroyed again before completing a Phylactery and undergoing this ritual, he will be destroyed permanently. After fifteenth level, the Necromancer can also bestow lichdom on any other willing evil Cleric, Necromancer or Magic-User character of 12th level or greater. Again this requires a Phylactery and an hour long ritual. However, unlike the Necromancer, the participating character must succeed at a system shock roll or else the soul will be forever lost (not even divine intervention, a wish or a True Resurrection spell will restore the character to life or lichdom).
Posted by Dangerous Brian at 22:58