Digging the Sandbox: The Jade Hare, Temple of the Ape and Idol of the Orcs. 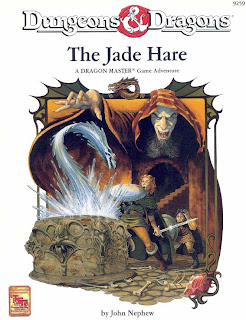 J-1 The Jade Hare is a fairly standard “rescue/retrieve” module for low level characters. In the module itself, the Idol has been stolen by a wizard and his goblin followers, taken from a small village. At just ten pages long it's a short module, with a small dungeon that a typical low level party might manage on a single trip, and otherwise sparse on setting details, making it easy enough to Transplant into any campaign. The character and location names have an eastern feel, but this is easy enough to change on the fly.

Which leads us to the issue of how easily the module can be converted to the Hyborian Age. There aren't many settlements in the Barachan Isles outside of Tortage, with the exception of Pictish Villages. However, in the Age of Conan game it appears that while slaves are (obviously) not illegal in Tortage, escaped slaves are. In fact, escaped slaves are simply not allowed into the city and must face exile. I imagine that these former slaves are themselves, in fact, something of a target for slavers. So I shall rule that a small band of ex-slaves have long since banded together to form a small village not far from Tortage, deeper into the mountains and protected by stout stone walls for protection. They may even trade with the city itself from time to time, providing it with some essential local items such as meat, furs, hides and so on.

We shall rule that the Jade Hare was stolen from here. I'll also use the village as the base location for other, similar adventures in the same vein. By which I mean modules that require that the party assist a village. The villain of the peace is an easy one: he'll become a Stygian sorcerer, perhaps either in service to another, more powerful sorcerer on the island or else a runaway apprentice out to make a name for himself. Once again, the goblin servants will become a bunch of Picts and pirates, change the desert setting to a desert island and we're ready to roll.

So this module gives me two locations to add to the Sandbox: the Slave tribe village and the Dungeon of the Mad Warlock. I'll leave off a decision on where to put these just yet. Chances are they will go on the main island, but lets see what we get from the other modules first.

This leads us to the T 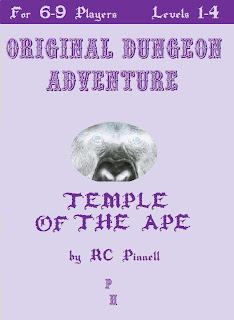 emple of the Ape Module by RC Pinnell. At 15 pages long it's also a nice, short module which any given party should easily manage in a short session. However the first 6 pages serve as an introduction to Old School gaming and rules. The Premise that the party encounters an island village of beautiful women, with no men. These woman are refugees from ancient times (in my campaign, I'll say they are descended from Atlantis or the Acheronian Empire) and are protected by wise-women and man-apes. Yet the villagers have heard little from either in some time and now the head-hunting local hobgoblins (Picts again, in my campaign) are starting to encroach on the villagers traditional territory. Que a quest to find out whats happened to the man-apes and wise-women.

It's a nice enough little module, but presents an awful lot of unanswered questions. One off-hand sentence notes: “there are no men in the village (anymore).” Anymore? What sort of explanation is that? True, a variety of possibilities for how the woman breed (and what with) are hinted at in the module text, but there is nothing at all to say what happened to all the men? Frankly, the module relies on innuendo, never quite wanting to come out and say exactly what's going on. The author explicitly states he is aware of the lack of concrete answers, but demures by saying he wanted to emulate the style of certain Old School modules by allowing the DM to decide what's happening on his own. Personally, I hated those particular old school modules. I like to know what the module writer was thinking when her wrote the module. Hell, if I don't like it, I'll change it anyway. But the chance exists that the author's explanation could have been far more interesting (and make more sense) than mine. After all, what's the use of a “mystery” module if the mystery isn't resolved by the end of it? DM's enjoy finding out the answers to mystery's as well, after all. It's one of the reasons I actually buy modules rather than just making my own. The main one, of course, being that building a sandbox takes long enough without having to write everything in it.

Regardless of it's many flaws, Temple of the Ape has a great deal of Hyborian flavour to it. It's this fact, rather than the writing, that will win it a place in my Hyrborian Age sandbox. Even so, I just can't shake the slightly disappointed feeling that with a little more work on the part of the author, this could have been a right little gem of a module.

Temple of the Ape requires an island setting. But to justify why these women haven't gotten themselves kidnapped by slavers, it'll need to be quite out of the way. The module suggests a large island, but in this case I'll have to make it quite a small one. If only to explain why a colony of nubile females all on their lonesome in the middle of a Pirate Stronghold hasn't already come to a bad end.

So, three more more locations for the sandbox from this module. The village of women. The Temple of the Ape and Pictish Head-Hunters Village.

Finally, we have the 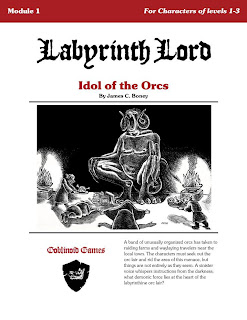 Idol of the Orcs. Another small dungeon, just to continue the theme, though with a delightful twist and extremely well written. However, in this case I think I will exchange the Orcs for a band of pirates or brigands down on their luck (perhaps even the survivors from the Pirate's in Treasure Hunt). I'll either make it a sea cave on one of the smaller islands or place it in the wilderness around Tortage. Rather than Orcus as the idol, I reckon I'll make it some ancient, evil Acheronian demon-god. The module won't so much be an adventure with a lead in as a wilderness location the party might some day stumble upon.

So that adds one more location to the sandbox, for a total of six locations from 3 modules. So far, from 4 modules reviewed, all four have earned a place in the sandbox. I hope I can start paring the numbers down soon, or else I'll end up with an adventure site in every damn hex!.

Posted by Dangerous Brian at 21:33

Cool ideas. I'm in touch with R.C. Pinnel (Thorkhammer) from time to time. I've done a bit of editing/advice for him on his earliest Giants modules. He's a good guy with a lot of fun ideas, but not the best writer out there.

It's cool to see you piecing together all of these modules for your sandbox. I made the mistake of trying to do everything myself, and the campaign didn't ever get very far.

I think you've hit the nail on the head. Temple of the Ape is a really fun idea. Just a little more work on the writing and content would make it quite a good module. I think I'll check out more of his work. I don't mind paying Thonkhammer's low prices to mine a fun idea or two.

I'm hoping I can keep up the reading and reviewing for the Sandbox, but I can't help think I may have given myself too big a reading list. I want to include modules that I haven't used before, but even I just keep to TSR modules from now on, it's still avery long list.

hello there thanks for your grat post, as usual ((o:

really an eye opener for me.