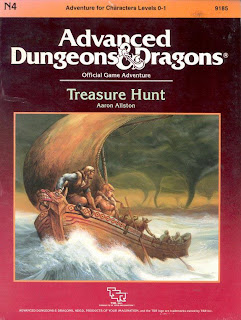 Possibly one of the most inappropriately named modules to be produced by TSR, N4 became something of an experiment. To the best of my knowledge, it was the only module ever released for 0 level characters – though the “Players Guide to the Dragonlance Setting- also had optioned rules for beginning play as a O level character, at least in some classes.

The basic premise is that the characters begin play as typical nobodies – 0 level fighters taken by slavers only to be stranded on a deserted island. Beginning at -500xp, the choices made by the characters during the game help determined what class that character eventually becomes at 1st level. The module includes convincing enough mechanics and encounters to justify development into just about every character class in any Old School setting. There is even a convincing “religious epiphany” moment to justify a character suddenly “finding god” and wishing to become a cleric.

Refreshingly, given that the characters begin with nothing more than the clothes on their back (or, rather, loins. They are slaves remember) the module tends to reward players that either avoid combat altogether or else cunningly take advantage of the environment to even the odds. By the time the characters reach a point in the adventure where they positively have to fight, they should have advanced to first level and scavenged enough weapons and armour to have a reasonable chance of surviving.

Ultimately, of course, the goal is to abandon the island and return to civilisation. The module includes brief notes on an island archipelago (one which contains the N-4 Island) as a setting for further adventures. Successful exploration of the nearby islands is facilitated by the ultimate treasure to found in the module – a boat.

For me, one of the best features of the module is that is allows new players to work out what type of character they would like to play, through play. Thus a character who decides he really would prefer to be a cleric rather than a fighter has a convincing means to change from one to the other mid-scenario without having to roll up a new character. Another plus is the very setting itself. It's an island, you can place it easily in just about any campaign setting. As an introductory, basic level adventure, it also provides a convincing reason for a motley mix of character races and classes to adventure together -they are escaping from a life of slavery together. Such shared experiences might very well create strong bonds within and between a group of people that might otherwise hate and despise one another. After all, it's hard to actively dislike someone who has helped save your life. 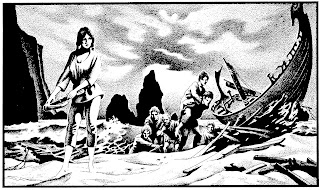 Like any commercial product, the module has it's flaws. It can be a rail-road at times, but with new players unused to gaming this can be a useful thing in and of itself. The module focuses on only one way off the island, yet it hints at two others, both of which would be much, much more difficult for the party to survive. Finally, there is a certain encounter in a temple which I have alluded to earlier. Yes it makes sense given the circumstances, but veteran players might role their eyes at the interest of such a being in a low level party. Come to think of it, there are two possible encounters in the temple that might have veteran players roll their eyes. The second because of a potential “Dick-DM/Ass-Hat” TPK kill moment. An encounter where the creature in question is deadly enough, thank you, without playing out the encounter exactly as written, however sensible the tactics used by the foe.

One of the primary areas of concern for me with regard to module selection is the ease with which a module can be converted to Hyboria. Happily, N-4 cn be adapted with a minimum of effort. The island setting makes it especially easy to incorporate into the Barrachan Isles Sandbox. The slavers are a classic Hyborian foe -and can lead on the Slaves Lords series of modules at a later date. Finally, the main antagonists of the module consist of warring bands of orcs and goblins. Obviously, for those who know Hyboria, this isn't exactly an appropriate choice of foe. Easy enough, however to replace the goblins with Picts and swap out the orcs for a band of Pirates. Success. Module adapted in under thirty seconds.

Treasure Hunt is an undiscovered, unforgotten gem of a module lost amid the sheer cornucopia of other, equally good entry level modules produced by TSR. Yet it's unique features should help it stand out from the crowd. This is why I'm especially happy for the opportunity to use it as the opening module of my new Hyborian campaign. A cracking module which, despite it's flaws, I love to run again and again.

Posted by Dangerous Brian at 18:07

I always liked this one too. Never had a chance to run it though... I'd be curious to see if it worked out smoothly, with the PCs gaining their class and all.

It usually works out okay. Only once has it been a potential problem. One player had their character repeatedly use a looted crossbow, not realising that she would eventually become proficient with it. When she realised her character no longer qualified for the cleric class, she became rather upset. But given she was a novice player and had understanding of class requirements and weapon proficiencies, I simply decided that her deity would make an exception under the circumstances.
She became rather famous in the campaign setting as "that cleric with the crossbow".

Limited understanding, I mean. Hows that for a typo?

Did the module cause you problems Greg?

This module was a unusual one when it came out. I've never had the chance to run it or be run through it, but it has an interesting concept with the 0-level that would have been fun to explore.

If you ever get the chance to pick it up and run it, I heartily recommend that you do. I can't deny that it has certain flaws, but it's an excellent module to kick-start a new cmapaign with.

Good fun as a one-off too, come to think of it.