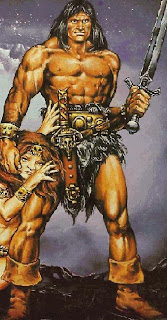 Okay, I lied. This stuff forced it's way into my brain while I was in bed. I'm sure as hell not going to get any sleep till I write it all down so here it goes.

In the Hyborian Age, player characters must be human. A fact that will go without saying for anyone familiar with the setting. However, multi-class characters are very much a trope of Hyboria – Conan himself was fighter/thief after all, though it could be argued with some justification that he was dual-class character who dabbled in thievery for a bit before returning to his original fighter class.

Multi-class characters can pick up to two classes from the following four groups and combine them to create their character. However, no more than one option can be chosen from each group. For example, it is not possible to have a multi-class Magic-User/Illusionist or Fighter/Ranger. The one exception is the Houri class. The Houri class may, in fact, multi-class with another Rogue class.

Group One: Fighting Men - Barbarian, Fighter, Ranger (Note that while Paladins are a playable class they may not be multi-class characters).

All normal multi-classing rules apply with the following exceptions:

Only single class (not multi-class) fighters may use the weapon specialisation rules. All other classes (including other, single-classed fighting men and multi-class fighters) may NOT specialise.

Posted by Dangerous Brian at 01:23

Forgive my ignorance, but have you detailed the extra classes such as the Houri on your blog?

Thanks Evan. The first part of the Houri article is up tonight. It's a modified version of the Houri class first published in White Dwarf 13 (fluff heavily modified, mechanics only lightly so).

The Necromancer class is from White Dwarf 35 or thereabout. I'll get to that one shortly.

oh, and the Barbarian class is already up on the blog. It can be found here:
http://dangerousbrian.blogspot.com/2010/11/barbarians-at-gates-rules-for-barbarian.html

Sounds good. I especially look forward to the Necromancer class. I've always appreciated the practitioners of the black arts.

It's not bad as classes go, very slick and in keeping with the "Sword and Sorcery" genre depiction of Necromancers.
Definately not a good class for PC's unless you're playing an evil camapaign, but excellent villains. The "Stronghold of Bone" class feature is just wonderful. Should be up within the week.

Thanks due to the fact that this nice article, it's extremely famous blogs