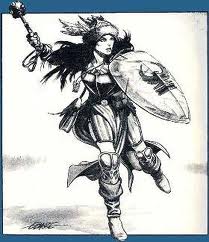 I've been putting-off this final old-school survival guide for quite a long time. Not because I didn't know what to say -on the contrary, the cleric is my favourite character class -but because of the high degree of variation seen in first level clerics from one set of rules to another.
In some of the earlier D&D box-sets the cleric didn't get to cast spells at first level at all. In the original D&D and AD&D games clerics who used non-blunt weapons could expect to lose their clerical powers. But there are rules in use today that, while they do not to permit clerics to take proficiencies in non-blunt weapons, do still allow clerics to use them without divine censure. The only penalty suffered being the standard negative modifier to attack rolls for using a weapon without proficiency. The situation is further confused by the ability of clerics in some settings to use any (or only) weapons favoured by their deity, not neccessarily just blunt weapons. Deciding what assumptions to make in this guide proved something of a headache.


In the end, I've decided to base this guide on the assumption that the cleric in your game is restricted to blunt weapon proficiencies and can cast spells at first level. This seems to cover most of the old school retro-clones in common use. At least measured by the yard-stick of the old school blogging community.
Without further ado, here is the guide:

The First Level Cleric's Survival Guide:
You're a brand new cleric. You've got your bludgeon, your holy symbol, more hit points than anyone except the fighters and you've got an armour class that equals theirs. Time for your cleric to go down that dungeon. Heal wounds and kick ass! Right?
Hell no!
THOU ART NOT A FIGHTER!
Sure your cleric can strap on plate mail and a shield with the best of them, and given your starting money in most old school systems, there's a darn good chance that you'll be boasting AC5 or better before the first time you even leave town. Top that off with your D8 hit points and you've got a good chance of surviving at least one hit before you need healing. Time to take your place in the front rank of the marching order?
Wrong!
That armour isn't there so you can wade into combat. It's there to keep you alive long enough to help keep everyone else alive. And not just with your healing spells either. Consider this: you might have the second highest hit points in the game, but a goblin wielding a longsword two-handed can still drop you with one hit. And if you go down, the whole damn party goes down. TPK. Campaign over.
Moreover, have you actually seen your weapon damage? Using most old school rules, the cleric is limited to blunt weapons. Blunt weapon's which typically (again depending on rules-set) do a lot less damage than anything the fighters are carrying. A fighter might drop that goblin with a single hit. In fact, with a weapons specialisation, he might drop two of them! But there's a good chance that all you're going to do (even to Mr 1/2 hit-die goblin) is make him mad. And if he's busy battering away at you with his sword, how are you going to heal the wounded party members when you're too busy defending yourself? Furthermore, being on the front lines means that any wounded characters who need healing have to stay near the enemy in order for you to heal them. Unless you want to turn your back on the monsters while the wounded guy stands behind you.
Come to think of it, do I have to mention just how many monsters there are out there that laugh at blunt weapon damage? Zombies, for example?
Consider then, the benefits of being in the second (or even third rank) of the marching order. From the second rank, you can heal a wounded fighter simply by reaching out and touching him on the shoulder. He doesn't even have to dis-engage from combat. Moreover, from the second rank you can still fight. Especially if you've chosen a proficiency with slings or the lucerne hammer. Or even a spear if your playing a system that won't strip you of your powers for using a sharp weapon. Even with a negative modifier for using a weapon you lack proficiency in, you'll still land the occasional hit. If you're lucky enough to find yourself in a party with an abundance of fighters and/or hirelings, you might even prefer to stand in the third row of the party marching order. This prevents any canny monsters from using their own pole-arms to strike over the heads of the fighters in front with the aim of killing you. You can still heal effectively from the third rank. Any-time a front line fighter needs healing, he simply switches places with someone in the second rank while you heal him. You don't even have to move.

Finally, the fact that you are almost as good at hitting things as a fighter at first level (assuming the fighter has specialised in a weapon) combined with your fairly high AC also makes you a good choice as the party rearguard. Especially if you've exhausted all your spells for the day. Just remember that, as rearguard, your job is to shout the alarm and hold off the monsters until the fighters arive. As soon as they do, make sure you place at least one of your fighter or hireling buddies between you and the bad guys. Don't throw you're life away. They'll need you to heal them when you recover your spells.

Regardless of whether your deity is loved or feared, of all the character classes (unless one of your companions happens to be of noble birth) you are the one most likely to gain an audience with a figure of authority, whether than be with the village elder or the mayor of a small town. While a first level cleric might not be able to gain direct access to a King or Duke by his own efforts, it's a fairly safe bet that, if he's been known for his diligence and respectability, he can at least arrange for an introduction from someone who can (such as the local bishop).
THOU ART KNOWLEDGABLE INDEED:
With the likely exception of the party magic-user, you may very well be the most educated member of the party. Indeed, in some settings -especially those which closely resemble the real life dark-ages- there's a very good chance that you and the mage are the only PC's who can actually read and write.
Make good use of this knowledge. Monks and lay-brethren used to make good money (and learned a great deal of gossip) by writing and reading letters for other people. When you're not adventuring, earn some extra coin (and possibly some kudos with your superiors) by using spells on behalf of the faithful in return for “donations”- and not just from cure spells either. Who wouldn't pay for a quick “detect evil” spell in the presence of their future mother-in-law? You also might be surprised at the things a Cleric might learn while making a house-call on a wounded or sick parishioner. The things people say in a fever....
THINGS TO REMEMBER
Posted by Dangerous Brian at 02:22

The weird delay in response was due to a call from the wife telling me she was headed home with the final parts of the puzzle-5 Arkham Horror expansions. I have been breaking down tokens and cards and such.

If you would like to add any commentary just post it or email me so I can included it, an overview or thoughts, inspiration for the series, whatever you think might be appropriate.

Now to find a few authors who are MIA. I must find them! The hunt is on! :)

Of course, in Labyrinth Lord, you'll have d6 hp... So even less inclination to mix it up with the melee dudes.

Arkham horror! You lucky man. Thank's for the feedback. I'll send you a paragraph or two later tonight, if that's alright? Good hunting, by the way.

@Fabian, you know, I wonder if that's one of the reasons why they made it D6. To discourage clerics from getting stuck in?

Yeah, Elder Sign is a gateway drug to Arkham Horror. I played 6 sessions of ES and bought AH and all the exp blind.

Being a Lovecraft fan(atic) I am in heaven. Always wanted to have a go at CoC but nobody was ever into.

The magic word: Solo. Both ES and AH. So if nobody else wants to step up, smack down some alien gods and go insane I guess I'll just have to DO IT MYSELF!

A great post! I've got to go back and read the others in the series.

I have been looking forward a new Survival Guide since you posted the last one.

Cheers Ragna. Sorry I kept you waiting so long.

I just found your website thanks to a link from my fb account. I am intrigued by your work. The blogsite looks very professional and the content is masterful. This will be a regular stop for me, I believe. Are you familiar with the 'Roll for Initiative' podcast and the OSRGaming.org forum site? I'd like to see you participate there if able. You can look up RFIPodcast on iTunes. Give them a listen sometime. Nothing but talk about 1st edition AD&D. Great stuff.

Thanks 7/6/1dad, you've greatly cheered a man confined to bed with man-flu. I'll start listening to those pod-casts right away and sign myself up to the forum. Thanks for the referral.

I want to thank DR EMU for the wonderful work he done for me and my family, i was having a serious breakup with my ex but when i contacted him for help he brought him back to me with his historical powers, and also helping me to get a job, since he cast his spell for me things has really be good to me and since i know him my husband has been faithful to me, well i will say that this man is a really great spell caster that every one must contact for help, if you are facing breakup or marriage problem just contact this man for help he will help you settle everything with his power, please contact him on his email: emutemple@gmail.com once you contact him all your problems will be solve.