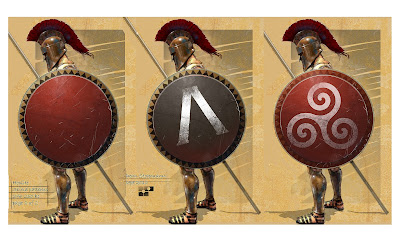 Known as the Bronze Legions, the Army of Zama represent the finest disciplined fighting force the lands of the Middle Sea have ever known. Though heavily outnumbered, time-and-again this mighty force has beaten back the fiercesome Mantis Legions of the Arcane Imperium. Were they not governed by the all-encompassing constitution of the Protectorate of Zama, a constituion that forbids the Bronze Legions from taking the field in a war of aggression, they could indeed have conquered the world.
At the core of this mighty armed force lies the Sacred Band, a body of professional soldiery recruited from every city of the protectorate, yet only from those of true Pheonixian blood. The 13,000 men selected to serve and die in the selected band are conscripts, recruited on pain of sacrifice. Yet to call this a conscript army is perhaps a disservice. Zaman boys at their childhood battle drills dream of donning the purple cloak and rune-encrusted bronze of the Sacred Band. An honour that, in nearly two thousand years of recorded history, none so-chosen have ever refused.
To join the Sacred Band is to be elevated to the ranks of a noble brotherhood, a warrior-society without equal in all the world. For while the professional warriors of other lands and cultures often die in training, none-so-many die in the attempt as those who seek to join the Sacred Band. 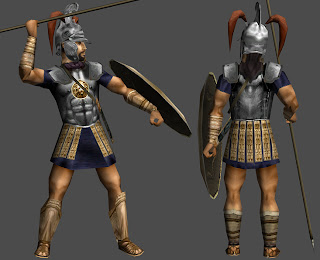 Always 13,000 strong, the Sacred band recruit from those who have attended and trained at the Dogi, the most brutal and effective warrior academy in all the Known World. From the age of twelve the conscript cadets, none of whom are ever addressed by their real name, but merely by a coded series of numbers of letters, strive to prove themselves worthy of the honour they have been selected for. Only in times of great calamity, when the Band's numbers have been depleted too badly for the graduating soldiers of the Dogi to fill the ranks are adult soldiers, the elite of other Zaman fighting men, admitted to this sacred religious order.
For the Sacred Band are not just soldiers. They are a warrior and religious elite, the Temple and Palace Guards of the Holy City of Zama and the Queen herself, a direct descendant of the Goddess Tanith.
Promotion within the ranks of the Sacred Band is earned by merit, not birth. Yet the Dogi is not a school of reading, writing or history. It is a school of war. And therefore, only those supplicants with the best educations prior to joining the Dogi, specifically those from rich or noble houses, ever rise to high rank. The sole exception is the Prince Archon, the Champion of Zama and leader of it's armies. The Prince Archon is chosen, by the Queen, to be her representative on the battlefield. She may chose any man for this task -but with two restrictions. He must be a member of her family, and he must be acclaimed by the man of the Band. 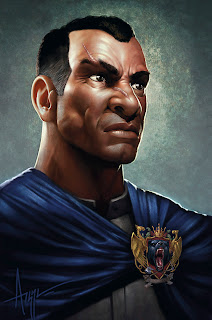 The current Prince Archon, Hamilcar, the Queen's Brother, has only recently come to replace her husband in this role. Yet even prior to his ascension his name has been legend. The Commander of the Blood Gates, the sole Pass into the lands of the Protectorate from the territory of the Arcane Imperium, he has already led the armies of Zama to Victory in eleven battles, and has been prophesied to lead them in many more. The Prince-Archon holds a place in the Zaman heart and the Zaman religion second only to that of the Queen herself. For just as Zama's Queen is the heart of the Goddess Tanith, so Zama's Archon-Prince is the mortal swords of it's Gods.
8000 men of the Sacred band fight as heavy infantry, forming phalanxes in battle armed either with long pikes or heavy spears, short swords and great, heavy round shields. Encased in rune-enchanted bronze chest-pieces, greaves and helms and wearing their mighty purple war-cloaks, they are the finest heavy infantry in the world. As immovable as a mountain.
Another 2,000 men of the Sacred Band, those afforded as they very best, ride into battle atop mighty warhorses. Known as the Companions, they fight equally well afoot as mounted and serve as the bodyguard and battle-companions of the Archon-Champion himself. 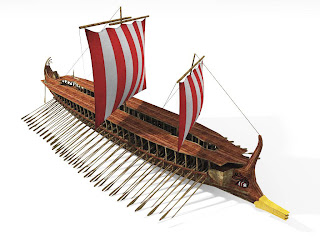 Last among the Sacred Band are the 3000 men who serve as Marines to man the mighty war-ships of the fleet, ten marines to a vessel. Though the ships of other navies might augment their rowers with as many as 40 to 100 marines, the men of the Sacred Band are no mere mortals. They go into battle even as sea in their heavy-bronze armour and long spears, allowing ten men to match against forty or fifty lighter armed marines of other nations. Unlike these other marines, who are expected to board and capture a ship, it is the task of the Sacred band merely to defend their own ship from boarders. The navy of Zama has no need to capture the inferior ships of enemy nations, preferring to send them to the bottom of the sea. Thus, the marines need only defend the narrow prow of a Zaman ship until it's ram is withdrawn, whereupon the enemy vessel sinks swiftly beneath the ways.
Zama’s navy consists of 250 fast quinqrimes and quadrimes augmented by about 50 tiremes act as scouts and messengers rather than warships. The ships of the Bronze Legion are crewed by well paid sailors recruited from Zaman families and accompanied into battle brothers of the Sacred band. In the face of the Arcane ImperiumsZaman sailors belong to the Peoni and don their armour and weapons before entering battle, heedless of the dangers of drowning. 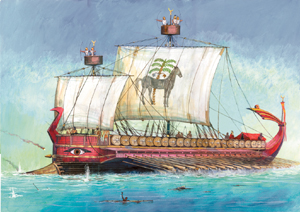 Though mighty indeed, the veteran warriors of the Sacred Band are few indeed, and this go into battle backed by Citizen Conscripts (the Peoni) and Mercenary Infantry.
In the nation of Zama, it is the task of women to rule and men to fight. Hence the Peoni number amoung them every male citizen of fighting age in the Protectorate.
Men of the first class equip themselves as Hoplites or Cavalry, armed with weapons identical to those carried by their brothers and cousins in the sacred band, with the exception that their own weapons (but not their shields) are made of plain iron or steel. Not the enchanted bronze of the Sacred Band. The second class also arm themselves with bronze shield and iron or steel spear, but their armour is as likely to made of linen as steel or bronze. The men of the third class fight as light infantry, armed with spear, shield and short sword, trained to harry the flanks of foes attacking the phalanx and to protect the phalanx in turn. Finally, the poorest men (those unable to afford even a single slave) are expected to arm themselves as archers and javelin men. A function that carries with it little or no shame and affords the opportunity for a brave man to enrich himself through plunder.
Zama only calls out the militia of any given city when the city itself is directly threatened. Thus the Peoni, while well trained, are under-used and lack experience in war-time. Zama makes up it's battlefield numbers with thousands of mercenaries, desperate and adventuresome men drawn from all the lands of the Middle Sea. Even in peacetime Zama may have as many as 10,000 or 12,000 mercenaries in service, or as many as 100,000 in times of war. Zaman mercenaries are grouped by nationality into Companies of a thousand men, each led by a Drakos (or Colonel) drawn from the Sacred Band.Zama engenders more loyalty in it's hired soldiers than most- the outer ring of the city is named the mercenary quarter, for the many soldiers housed therin. Living so close to the city they fight and die for, many such mercenaries settle down roots, marrying local Zaman women or freed slaves, and become eventual citizens of the City-States for whom they fight and die on a regular basis. And, to further ensure the loyalty of this multitude of paid killers, Zama honours and pays it's mercenaries like no other nation in the world. 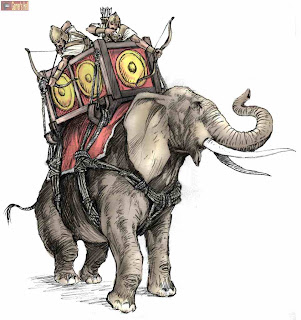 Finally, the shock troops of the Bronze Legion serve to terrify horses and men, winning battles it seems, often on their own. Each family of the Eighty, the leading houses of Zama, is required by law to maintain one war-elephant for the Protectorate.Stationed one to each of the eighty towers that line Zama's outer wall, these beasts go into battle clad in thick bronze and bearing armoured noble men of the eighty families on their back.
An almost irresistible force on the battlefield, Zama's armies know that where their war-elephants go, victory is sure to follow.
Edit:
Campaign Design Notes: As you might have guessed, the Bronze Legions are derived from the Carthaginian armies of the Punic Wars with a heavy dose of Spartan military theory and discipline thrown in. Although not all the men of Zama are trained in Spartan methods, the Sacred Band certainly are, though they start a little later in life than their real-life Spartan counterparts.

Traditionally, Carthaginian mercenaries were a lot less dependable than Zama ones, but just as Carthage had a "Mercenary War" so did Zama -although Zama learned a lot more from it's previous mistakes. Likewise, Carthaginian militia were not as effective in the later Punic War period than the Zaman's pictured here. While Carthaginian men grew soft and complacent behind their mercenary armies, the men of Zama most assuredly have not.
Posted by Dangerous Brian at 17:22

Thanks Biff. Sorry I'm so far behind on the A-Z. I plan on keeping these articles goinf all the way through May if I have to.